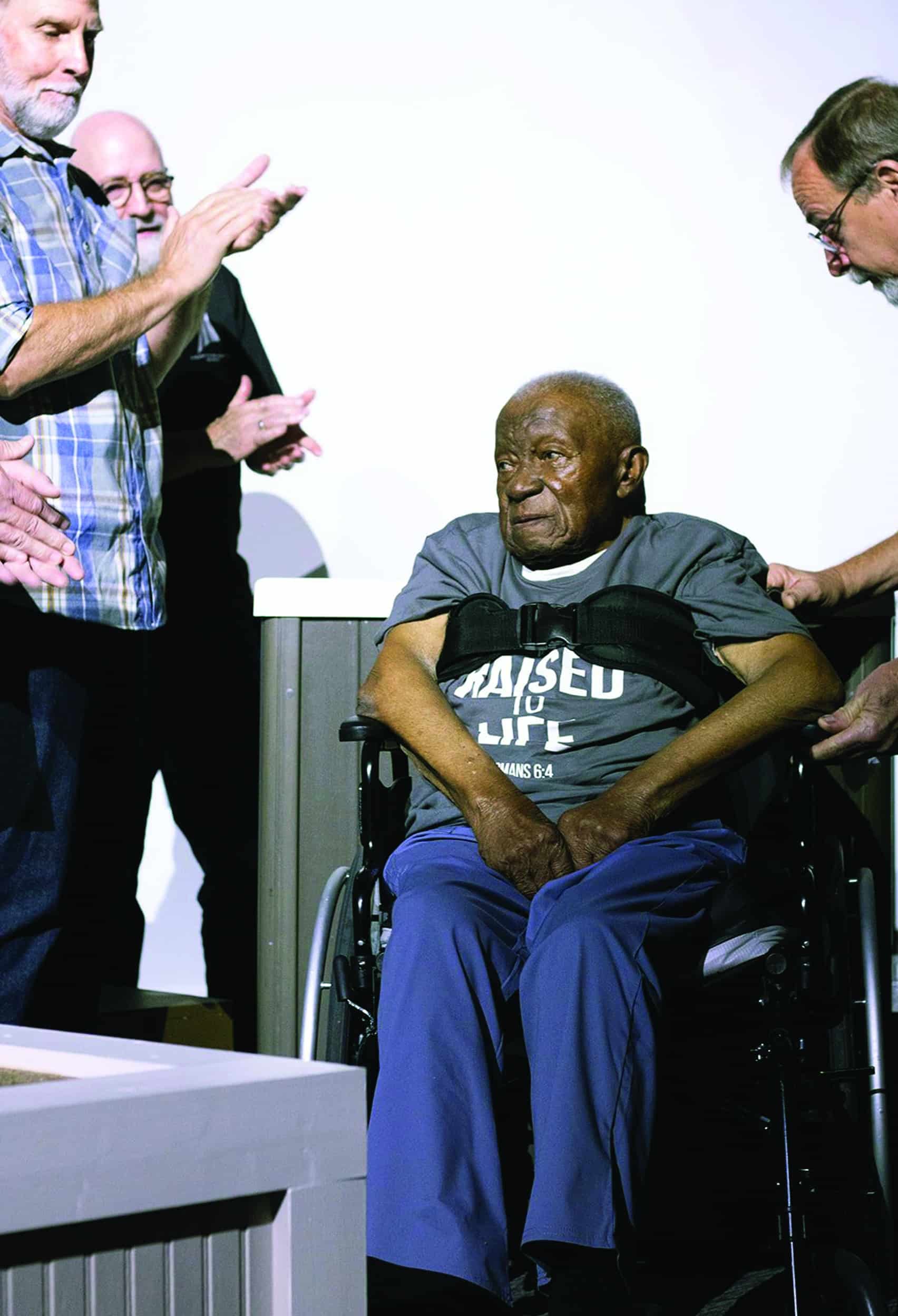 Wilbert Terry, a U.S. Army veteran who was part of battles in Europe and the Pacific, was baptized July 31. Submitted photo

SLIDELL, La. (LBM) – Wilbert Terry, 99, successfully completed numerous missions as a World War II veteran but he said none of those compared to the assignment he undertook to be obedient through believer’s baptism with the help of the congregation of Northshore Church, Slidell.

A retired firefighter, a police officer, a former law enforcement officer and a U.S. Coast Guard veteran picked up the wheelchair-bound Terry and placed him in the baptistery while Pastor Larry McEwen baptized him during the July 31 service.

Terry, a U.S. Army veteran who was part of battles in Europe and the Pacific, had surrendered his life to Christ when he was 15, but he was only sprinkled as a member of a Methodist church.

When he started attending Northshore Church several years ago, Terry learned of his need to become baptized through immersion. But health concerns delayed his baptism for more than a year, until Terry finally celebrated alongside friends and family on a day when four others were baptized.

“It felt good because when I think of all the Lord has done for me, importantly dying for me, I have to live for Him,” Terry told the Baptist Message. “To God be the glory. I’d love to see everyone come to Christ.”

McEwen believes God protected Terry in World War II so he could share the hope of Jesus with others.

“He knows the good Lord got him home from the battlefield and all the time since was a gift from God,” McEwen said. “Painting that picture of a new life in Christ through baptism is something he has wanted to do for a while. He wanted to honor the Lord for the way he saved his life not only spiritually but also physically on the battlefield.

“With Wilbert being a World War II vet, our people love and honor him,” he continued. “They gave him a standing ovation and there was hardly a dry eye in the place. The people singing the song after the baptism struggled to start because they were so emotionally moved.”

Since January, 25 new believers have been baptized at Northshore Church, which averages 566 for Sunday worship. McEwen said the baptisms reflect the congregation’s passion to see others come to Christ.

Started in 2001 as a plant of Grace Memorial Baptist Church, Slidell, the church has grown from just a handful who met in McEwen’s living room. The church has seen hundreds accept Christ and 394 baptized since its formation.

Their outreach has included ministry to first responders, construction of homes in Haiti and Mexico and acts of service for community members by its men’s ministry.

“I’m so thankful to be a part of a denomination that places a priority on planting churches to reach the lost with the good news of Jesus Christ,” McEwen said. “Our church purpose is ‘to see the One who gave His life exalted and the ones He gave His life for transformed!’ Thank you for your partnership in helping us fulfill our God-given mission.”