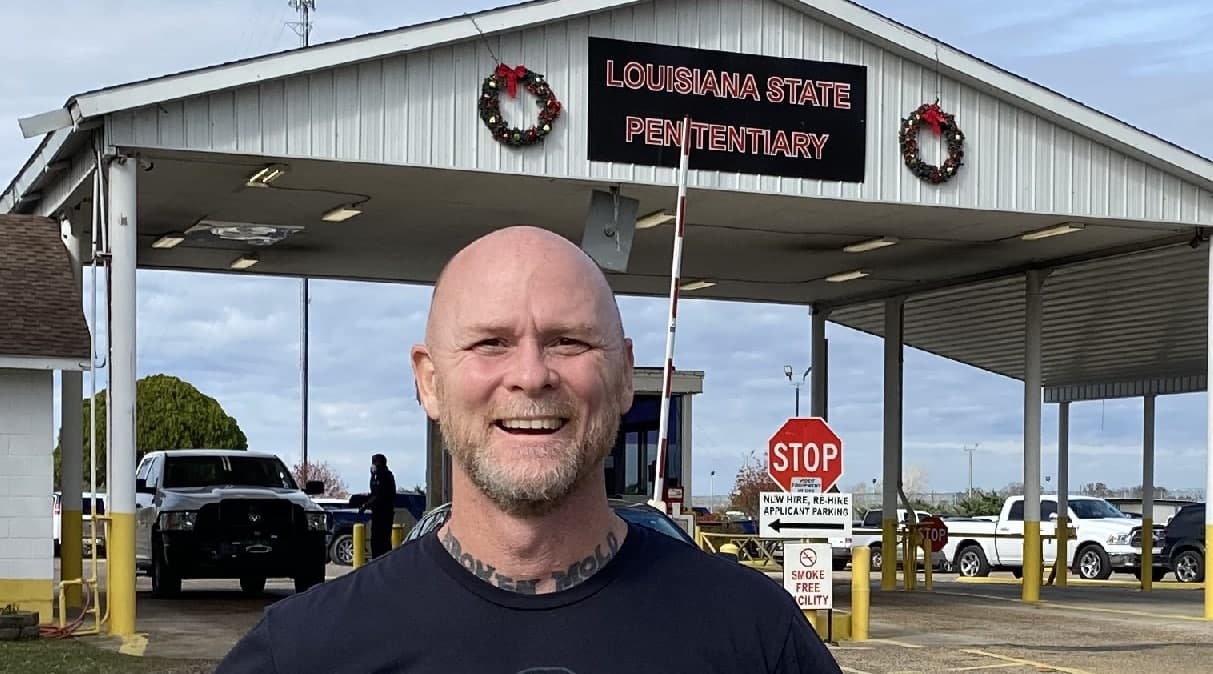 Paul Will was joyful moments after his release from the Louisiana State Penitentiary at Angola on Dec. 11, 2020. Will is the founding pastor of Grace Baptist Church, what is believed to be the first fully recognized Southern Baptist church inside the walls of a prison. Submitted photo

ANGOLA, La. (LBM) – Paul Will, the immediate past pastor of Grace Baptist Church in the Louisiana State Penitentiary at Angola — what is believed to be the first fully recognized Southern Baptist church inside the walls of a prison, has been granted parole and a second chance at life outside the prison.

According to his fiancée, Amy Kossover, a parole board voted 3-0 to grant Will’s release Thursday, Dec. 10, and he was freed Friday, Dec. 11.

“Many people have been asking me what is the one thing that mattered most on my journey to freedom,” Will said in a written statement to the Baptist Message. “I have believed there are many narratives to identify with in prison and I chose never to believe the ones that would keep me here.

Kossover, who met Will many years ago while interviewing inmates as part of a video project at Angola, said she was moved to tears when the board announced their decision.

“I am overjoyed for Paul,” Kossover told the Baptist Message. “It was pretty spectacular as I got to share the story of how Paul is a changed man of God. We now will look forward to all the things God will do in his life.”

Will was saved while in transitional incarceration at another prison. He was sent to Angola to serve a life sentence and while there he felt an unction to deepen his spiritual walk.

Will earned bachelor’s and master’s degrees at New Orleans Baptist Theological Seminary’s Extension, and was ordained by Hillcrest Baptist Church in Franklinton. He was called to be the founding pastor of Grace Baptist Church in Angola; and, during his leadership, Washington Baptist Association unanimously voted to accept the congregation into its fellowship in October 2015. He resigned as pastor a year ago, anticipating his release, but he remains a member of the congregation.

“It’s been really neat to see how the Lord has redeemed his life and used him,” said Stan Statham, director of missions for Washington Baptist Association. “Our association has really rallied around him and the church. The Lord has done a great work at Angola and he is one of many who have come to faith in Christ at Angola.”

For the past three years, Scott Breland, pastor of Plainview Baptist Church in Bogalusa, has led a team of men and women from Washington Baptist Association to work alongside Grace Baptist. Breland said Will has been an important part of the evangelical movement in Angola, with a 2019 Baptist Message report stating that as many as 4,000 of the 6,000 inmates now profess Christ as Lord. Additionally, 338 inmates have graduated from the seminary’s extension program, with some having transferred to other prisons as missionaries — at the request of those facilities. Before the ongoing revival, sparked in 1995 by the ministry degree program established by Louisiana Baptists and the New Orleans Baptist Theological Seminary, Angola was known as the bloodiest prison in America.

“God has done a great work through Paul,” Breland said. “His story is a story of redemption and service. He has been redeemed and now he serves Jesus. Paul Will’s release will be a loss for the Christian movement inside Angola but I believe God has some great opportunities for Paul outside the walls of Angola.”

“God can do more than we can think, ask or imagine,” Krossover said. “I watched a miracle happen today. It is rare for anyone to get out of Angola and for the governor to sign his clemency. And then I can’t even image what God is going to do. We are open to following the Lord and wherever he leads.

“This has been a long journey and there have been so many ups and downs,” she continued. “It has not been an easy road for him to get out of there. I have so much gratitude and am so humbled and grateful.

“I have been reminded of the goodness of God,” she continued. “His mercies are new every morning and He never leaves our side.