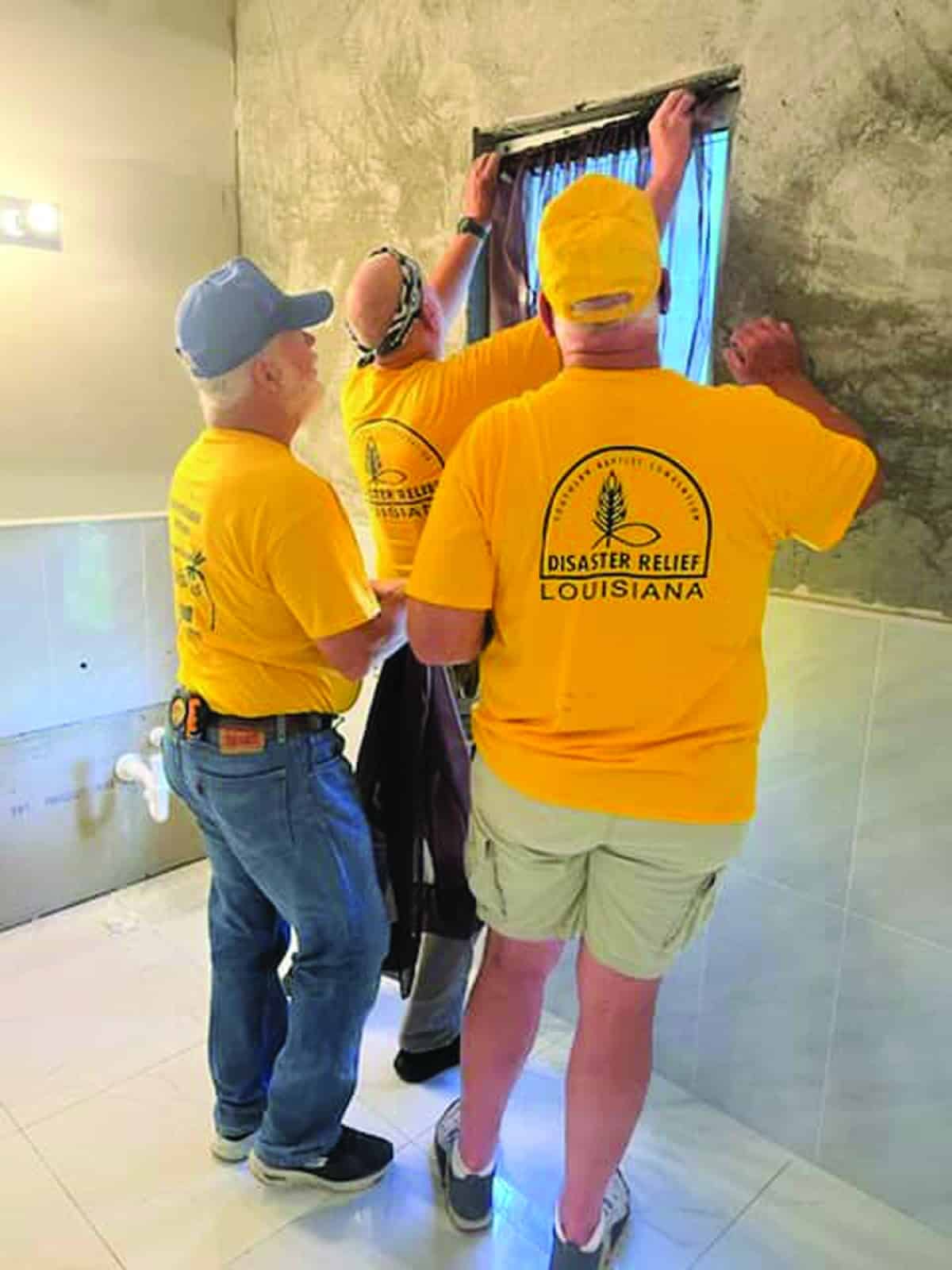 Members of the Louisiana Disaster Relief team put the finishing touches on St. Matthew Baptist Church in the Bahamas in early May. The church will be re-dedicated in a special ceremony July 24. Submitted photo

PELICAN POINT, Bahamas (LBM) – Most work on the rebuild of the structures of the St. Matthew Baptist Church is complete, making way for a July 24 re-dedication of the facilities leveled by Hurricane Dorian in 2019.

According to Louisiana Baptist Disaster Relief Strategist Stan Statham, only carpet installation and some interior painting need to be done.

A LBDR team of six people put most of the finishing touches on the project, May 2-11. While there, the team installed doors on the worship center and classrooms, completed work on restrooms and placed air conditioning units throughout the building.

“This is a ‘Thank you, God’ moment,” Statham told the Baptist Message. “When you think of COVID-19, and another tropical storm that hit the island, you can’t help but praise the Lord. The project has given people in the community hope that they will get through the rebuild of the island.”

LBDR member Howard Turner, who participated in the most recent trip to St. Matthew Baptist, said he is awestruck at God’s faithfulness throughout the project.

“The reward of being part of the St. Matthew rebuild for many trips is two-fold,” he said. “First, it’s the joy and privilege of serving an awesome Lord and Savior. And the second has been watching a community come back to life and be reunited in worshipping God.”

St. Matthew Baptist is one of nine Baptist church[1]es (there are a total of 13 Baptist churches on the island) severely damaged or destroyed by the storm that packed 185-mile per hour winds at the height of Hurricane Dorian on Sept. 2, 2019.

Louisiana is among several states participating in ‘Bahama Rebuild,’ a partnership with the International Mission Board and Baptist Global Response. Louisiana and Mississippi have sent numerous teams to rebuild the church while the Baptist state conventions of Alabama and North Carolina are sending additional teams to undertake other projects on the islands.

Since the first team arrived in late December 2019, teams have completed the foundation, driveway, walls, ceiling, floors, electrical lines, bathrooms and doors. The project also encountered such difficulties as a border closure in July 2020 that prevented Louisiana Baptist Disaster Relief teams from working in the country for the next 12 months. Meanwhile, Hurricane Isaias, August 2020, dumped heavy rain and caused additional damage to the island (but not to the church facility).

Pastor Freddie Lang said his members are thankful for the work LBDR teams have done and is grateful for how God has moved since Dorian. He is excited about the dedication that will include messages from LBDR representatives and Bahamian Prime Minister Philip Davis.

The 70 members have worshiped inside the tarp-covered fellowship hall since May 2021. Before then, they met in another church 55 miles away; inside vehicles on the church grounds; and under a tent on the campus. “This has been a very humbling experience and we all are very excited for July 24 to come,” Lang said. “The fact that God still allows me to be alive and a part of what He is doing is amazing.”