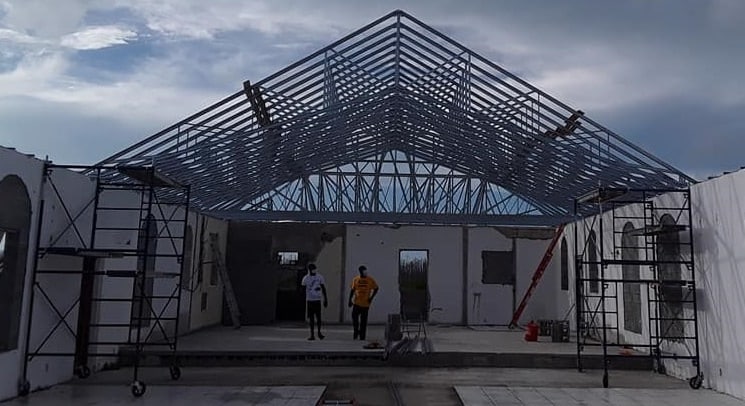 PELICAN POINT, Bahamas (LBM) – An unexpected announcement July 20 that the Bahamian government was closing its border to most travelers from the United States on July 22 forced a Louisiana Baptist Disaster Relief team to cut short their mission two days earlier than planned.

The 11-man team had arrived at Pelican Point, Bahamas, July 13, to help with rebuilding the 128-year old St. Matthew Baptist Church destroyed by Hurricane Dorian Sept. 2, 2019. The team had planned to mount trusses through Friday for the church’s new worship center.

However, out of precaution for any potential travel issues that might arise because of the border closure, the team boarded a ferry to Fort Lauderdale, Florida on Wednesday and returned to Louisiana Thursday evening.

“When it came to our attention the borders were closing, we began to pray and asked others to pray for options that would allow us to complete our work and still get out of the country,” Louisiana Baptists Disaster Relief Strategist Gibbie McMillan told the Baptist Message. “Our prayers were answered. And it is comforting to know we have prayer partners that we can call upon in our Baptist family.”

“These restrictions have been put in place to protect the health and wellbeing of both residents and visitors, which remains of primary importance, and to prevent the spread of the virus throughout The Bahamas,” the website said.

Team member Howard Turner, retired pastor of Live Oak Baptist Church in Denham Springs, said despite the challenges the trip presented, God helped the group prevail and to be the hands and feet for a church that is rebuilding.

“It’s hard without one being there at Pelican Point to fully realize the hope, encouragement, and significance that rebuilding St. Matthew’s church is having on the community,” he said. “This is not just another building project. This is offering those devastated by last year’s hurricane to see the power and love of God.”

St. Matthew Baptist Church is one of nine Baptist churches (there are a total of 13 Baptist churches on the island) severely damaged or completely destroyed by the storm that packed 185-mile per hour winds at the height of the storm.

Louisiana is among several states participating in ‘Bahama Rebuild,’ a joint partnership with the International Mission Board and Baptist Global Response. Louisiana and Mississippi are sending teams to rebuild St. Matthew Baptist while the Alabama and North Carolina Baptist state conventions are sending additional teams to undertake other rebuild projects on the islands.

Since the first team arrived in late December, teams have built a temporary shower and bathroom facilities; constructed a floor for a tent used for lodging; installed electrical lines that provide power from a generator lent by Philadelphia Baptist Church in Deville; and set up a washing machine, refrigerator, stove, freezer and griddle which is used for feeding other teams who come.

Future plans are unknown because of the current situation, but McMillan said Bahamians will continue work on the church until Louisiana Baptists can return.

“Louisiana Baptists have invested an enormous amount of time and money into the completion of this project so that the people of East Grand Bahama will have a strong point of witness from which to worship and work for many years to come,” McMillan said. “As we can, we hope to assist teams from Louisiana to be involved in hands on missions sharing the love of Jesus to the people of the Bahamas.”

For more information about giving to the effort or being a part of a team, visit the Louisiana Baptists Disaster Relief website.

Any tool can be misused. A hammer can construct or kill. An electrical wire can give instant light or, if mishandled, bring sudden death. … END_OF_DOCUMENT_TOKEN_TO_BE_REPLACED