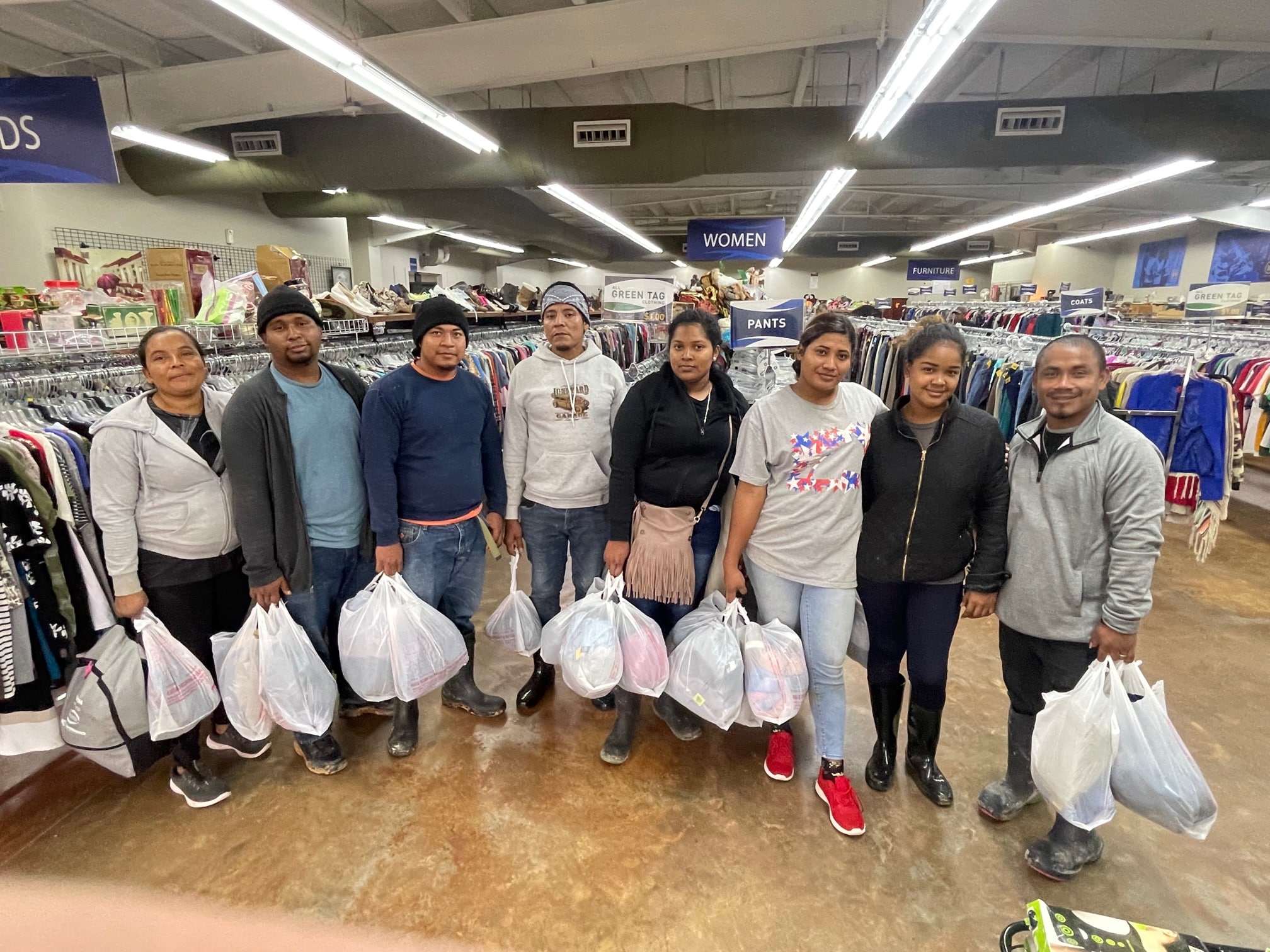 Residents of a trailer park in Farmerville that was damaged by a tornado, Dec. 13, were treated to free clothing and lunch at Rolling Hills Ministry's thrift store, Ruston. Submitted photo

Area churches and Rolling Hills Ministry in Ruston were quick to step in with assistance as the needy individuals from Honduras and Nicaragua received air the following day.

According to RHM Director of Ministries John Cowling, RHM Director David Abernathy, his wife, Jerri, and himself were assessing damage the tornado caused in the area when they were directed by local authorities to Alex, who manages the individuals who lived in the trailer park.

After a brief conversation, Alex agreed to transport the residents to RHM’s thrift store, where they received clothing, other necessities, and a lunch. Later that evening, RHM also provided supper for the residents at their temporary housing, an apartment complex in Farmerville.

Additionally, area churches from Concord-Union Baptist Association upon learning of the storm victims need donated $3,000, with RHM matching the donation. Each resident received $200 during a special prayer service, Dec. 14, at the former Farmerville High School.

Cowling said he was proud of Association Director of Missions Barry Joyner (who spearheaded the effort to collect the monetary donations) along with area churches and volunteers.

“I found great joy in serving people who lost everything,” Cowling told the Baptist Message.

Abernathy added: “Some of the ones who don’t have much to begin with sometimes suffer the greatest loss. I’m glad churches, Rolling Hills and disaster relief can make a difference just to give them some hope.”

Farmerville was one of several areas of the state rocked by tornadoes Dec. 13-14 from a powerful cold front.

Louisiana Gov. John Bel Edwards said on Wednesday, during a tour of damage in Keithville in Caddo Parish, the state was unofficially hit by 21 tornadoes in a 24-hour period. Teams from the National Weather Service were conducting a full ground survey to assess damage and just how many tornadoes hit the state.

“Donna and I are praying for the families and communities who lost loved ones and everyone who suffered injuries or lost their homes,” Edwards said in a statement. “I can tell you from today’s tour the damage is great, but the generosity and love being shown by the neighbors of these victims is even greater.”

The storm was responsible for at least three fatalities.

The Louisiana Department of Health confirmed the deaths of a 30-year-old female and her 8-year-old son, who died after a tornado destroyed their home in Caddo Parish, Dec. 13.

LDH also confirmed the death of a 56-year-old female who died after a tornado destroyed her house in the Killona area, Dec. 14, in St. Charles Parish.

New Orleans, where multiple tornadoes damaged homes and caused multiple injuries and at least one death March 22, was among the areas hit again on Dec. 14.

Among the communities in the New Orleans area reporting damage was Gretna, which had at least 200 homes and businesses damaged, according to the New Orleans Advocate. Around 30 of those structures will require emergency demolition.

In Marrero, a Winn-Dixie grocery store was badly damaged, WDSU-TV in New Orleans reported. The Jefferson Parish Emergency Management Department reported a “large amount of damage” throughout the area.

Besides the one death, Killona had seven other injuries.

In Algiers, at least five people were transported to the hospital from storm-related injuries.

On Dec. 13, the Madison Parish Sheriff’s Office reported structural damage to homes and camps around Hunters Bend Road and Highway 610. One home sustained damage along HWY 610 when a tree fell on top of it. Some camps near Hunters Bend sustained roof damage, however, the camps were not occupied.

There was heavy damage along Hwy 126 in Caldwell Parish where numerous structures were destroyed by a reported tornado KNOE-TV reported.

The Rapides Parish Sheriff’s Department reported damaged to structures on Fish Hatchery Road in Forest Hill all the way over to US 71-South near LSU-A. No one was injured, the sheriff’s department wrote on its Facebook page.

Sayes Office Supply and Lott Oil Company on Hwy 71 North received extensive damage to both businesses from Tuesday night’s storms. Sayes had much of its roof torn off and several power poles close by snapped in half.

The center suffered damage, including blown out windows, and did not accept patients until the damage could be assessed according to the New Iberia Police Department on their Facebook page. A tornado touched down in the Southport Subdivision area, damaging several homes and trapping residents.

The tornado outbreak in Louisiana was part of a larger system that also produced tornadoes in Alabama, Florida, Georgia, Mississippi and Texas, blizzards in the northern Rockies, northern Plains and parts of the Upper Midwest, and ice and snow throughout the Mid-Atlantic and Northeast.

By JT Waresak I'm not a huge New Year's resolution guy. However, as a new year begins, it is another opportunity to raise the bar in my effort to be the best dad I can be. I'm also reminded that the opportune time to pour into my sons and daughters is limited to a couple of precious decades. This is not to say … END_OF_DOCUMENT_TOKEN_TO_BE_REPLACED