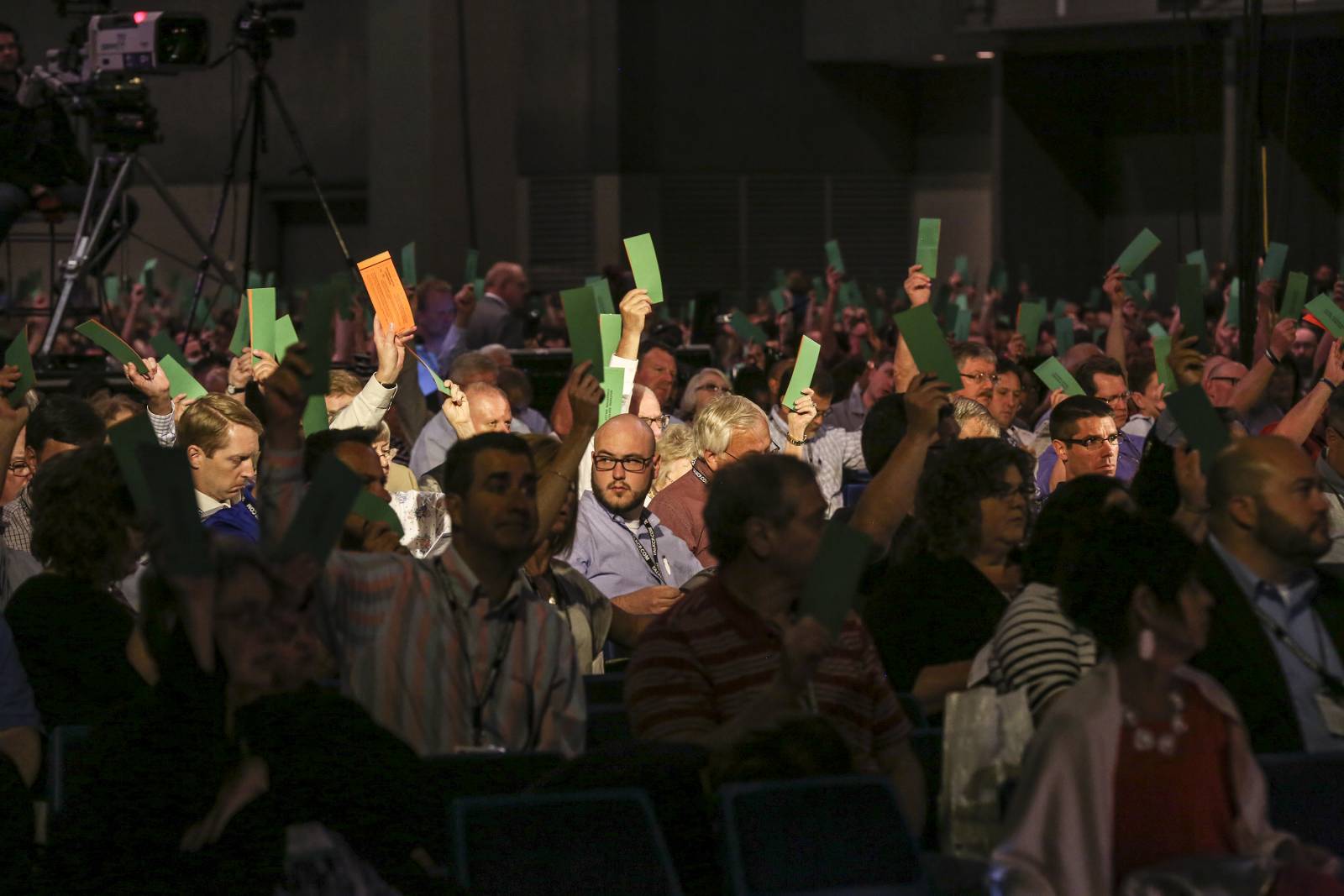 Messengers at the annual meeting of the Southern Baptist Convention cast ballots for a resolution during a prior session.

Steven Bates, chairman of the committee on order of business and a member of First Baptist, Winnfield, told the Message that messengers should be mindful that only 20 minutes are allotted for the introduction of motions according to the agenda.

This year, though, following the report of the Sexual Abuse Task Force (Tuesday at 1:45 p.m.) presented by Bruce Frank, a member of Biltmore Baptist Church, Arden, North Carolina and the task force chairman, there could be a marked increase in discussion as well as additional motions being introduced.

Bates’ committee has set aside an hour for the report and discussion.

”I don’t know how much discussion there will be,” said Bates. “Our committee in drafting the agenda has set aside an hour for the report and any discussion. If that is not ample time, then someone must make a motion to get additional time and the agenda can be modified. The problem is we have so many things that must be dealt with that this could push things back
some.”

The 288-page report — that can be found on sataskforce.net — outlines the Executive Committee’s handling of sexual abuse cases between 2000 and mid-2021. The independent investigation was conducted by Guidepost Solutions.

Wednesday morning at 9:05 a.m., McLaurin will give the EC’s recommendations. Thirty minutes have been allotted for this report.

“Every part of the agenda is timed out and there is an official timekeeper to make sure it is kept,” said Bates. “The problem is if we didn’t limit the time for motions, we would spend all our time just taking motions. There would be no more time left to conduct the business of the convention.

”On the agenda messengers have two opportunities to make motions [Tuesday at 10:10 a.m. and 4:55 p.m.],” Bates continued. “The time for making a motion is only 15-20 minutes long. It’s limited on how much time we have for debate and motions brought to the floor have to have someone speak for and against said motion. If time runs out, it may just be one for and one against. There will be a parliamentarian on stage and others stationed at different microphones to assist with questions that arise,” said Bates.

“Once motions are made, they are brought to our committee, with the help from our legal committee and parliamentarian we will determine if said motion can be debated on the floor, referred, or ruled out of order for any reason,” Bates said. “We highly request people prepare their motions. They can get assistance from the parliamentarians there to help them draft
motions.”

By Steve Horn, Louisiana Baptists executive director Jesus reminds us that we should always pray and never give up (Luke 18:1). Today’s ruling from the Supreme Court serves as a good reminder of that truth. For almost 50 years, American Christians from various denominational backgrounds have been praying and … END_OF_DOCUMENT_TOKEN_TO_BE_REPLACED