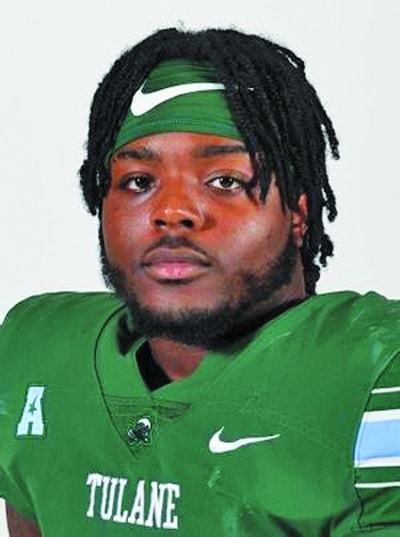 NEW ORLEANS (LBM) – Typically, Nick Anderson is a vocal presence on gridiron as an all-conference linebacker for the Tulane Green Wave, but he was at a loss for words as he looked across AT&T Stadium in Dallas, Texas, following a comeback win in the 2023 Cot[1]ton Bowl.

Anderson registered five tackles as Tulane, the number 16 team in the nation, erased a 15-point deficit in fewer than five minutes to pull off a 46-45 upset of the 10th-ranked University of Southern California. According to the Athletic website, over the past five years, Football Bowl Subdivision teams were just 1-1,692 when trailing by 15 points with five minutes to play.

A native of Vicksburg, Mississippi, Anderson played four seasons at Tulane. During that time, he amassed 283 tackles, 10.5 sacks and two forced fumbles.

“God has always been the head of my life and my journey,” Anderson, who turned to Christ when he was five years old, told the Baptist Message. “My career has been through many trials and tribulations, but He has always shown true to his Word in covering me every step of the way. I’m blessed to be in this position and blessed to have been used as a vessel to help guide this team to a historic season by using the light that God blessed me with as well as his guidance and putting my faith first.”

As he looks to the 2023 NFL Draft, Anderson is hopeful that he can continue to give God the glory.

“I know He will bless me with the opportunity to continue to showcase how great he is and how he’s been able to work miracles in my life,” he said. “I have always said that I would use my platform to give him the glory, and I will continue to do that when I get to the next level. I want to cement my legacy as a man of God who was used to inspire others through my walk and career to have faith in God, themselves, and the journey.”

Tulane BCM Director Corey Olivier first met Anderson in 2019, when the two prayed together before football games. A year later, Anderson asked Olivier if he would disciple him.

“From that point on Nick and I have met together to talk through various books of the Bible, journal entries we made while reading them, and how to navigate through college, football, and life in general with a biblical perspective,” Olivier said. “He also attended BCM small groups and weekly dinner and worship gatherings when his class and football schedules allowed him. Nick has been an ambassador of Christ to his teammates and coach[1]es, and I have no doubt he will represent Christ at the next level.”

By JT Waresak I'm not a huge New Year's resolution guy. However, as a new year begins, it is another opportunity to raise the bar in my effort to be the best dad I can be. I'm also reminded that the opportune time to pour into my sons and daughters is limited to a couple of precious decades. This is not to say … END_OF_DOCUMENT_TOKEN_TO_BE_REPLACED