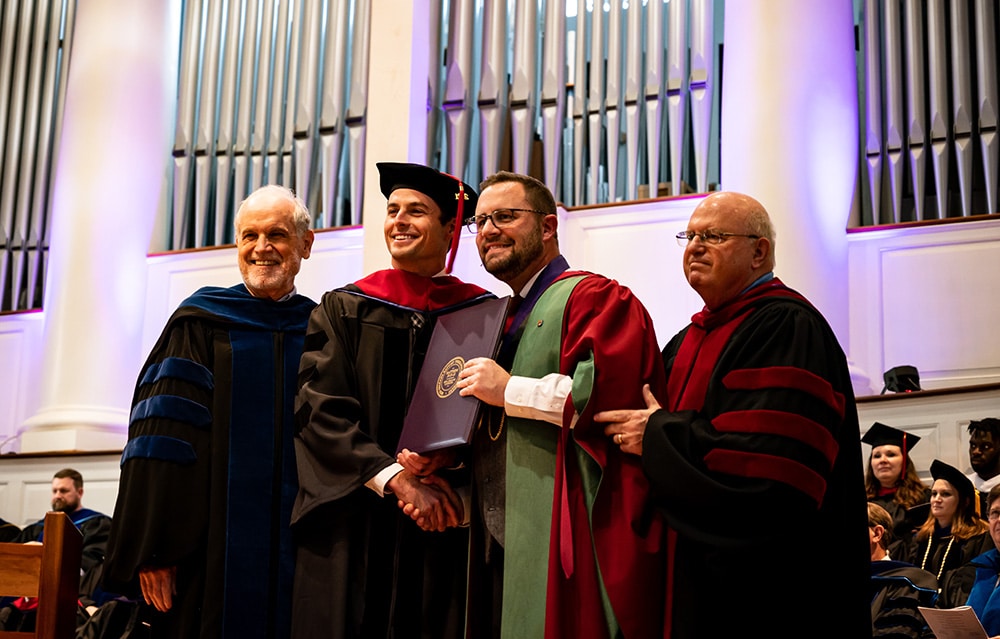 NEW ORLEANS, La. (NOBTS) – New Orleans Baptist Theological Seminary and Leavell College celebrated 200 graduates Dec. 11 as President Jamie Dew charged them to make service to Christ the true end of all that they do.

Eighteen doctoral degrees were conferred during the school’s commencement ceremony, including seven Ph.D.s, a doctor of musical arts, one doctor of educational ministry and nine doctor of ministry degrees. Ninety master’s degrees and 92 undergraduate degrees and certificates were awarded.

Dew began his charge to graduates by acknowledging that some might be present in the audience who wondered why their graduate went to the trouble of years’ worth of papers and exams in order to get a degree. While some might see the graduate’s work as the “means” and the degree as the “end,” Dew pointed to the philosopher Aristotle who recognized that “ends” in actuality may be means to yet another end.

Dew said the question then becomes, “what is the ultimate end?”

“What is that one end, that one good that we seek for its own sake?” Dew asked the audience. “Of all this work that we have done, what is it exactly that we seek? …  It’s important that you understand the answer to that question.”

Dew explained that if graduates failed to keep their focus on the “right end,” the consequences could be “tragic.” When ministry or work is the “end” pursued, then ministry becomes an idol and an offense to God, and will leave them weary, Dew said.

“There’s no stress like a pastor’s stress,” Dew said. While ministry holds “deep joys,” it also includes sorrow, sacrifice, and loneliness and in difficult times it will be vital that graduates remember what the ultimate end truly is, Dew added. 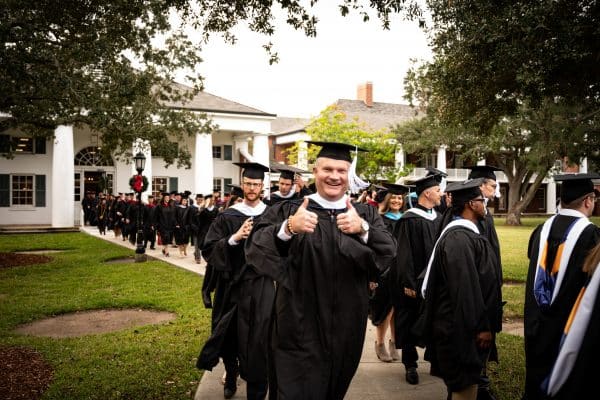 Isaiah provides an answer to Aristotle’s question, Dew explained and gave four points to show that the Christ prophesied in Isaiah is the ultimate end, an end worth pursuing.

“Christ is for us, Emmanuel, that is He is ‘God with us,’” Dew began, adding that humankind is meant for communion with God and that Christ’s presence makes it possible for His people to face life and do the work of ministry.

Secondly, “Christ is our redemption,” Dew explained. Dew urged graduates to remember that salvation means life after death, but also means more, and that because Christ has “refurbished” their lives, they can take the Gospel to those who live in darkness.

Dew continued, “Christ is our peace.” Isaiah spoke to a rebellious people whom God had allowed to suffer hardship and judgment, but God’s promise of peace was theirs and is today a message the world desperately needs, Dew said.

The scales of justice will be balanced when the King comes and mercy, grace, and truth will reign, Dew said.

“This is not the finish line. This is the starting line, and now you go forward to do the things God has called you to do,” Dew concluded. “What is it we seek for its own sake? It is Christ and His Kingdom.”

By Will Hall, Baptist Message executive editor ALEXANDRIA, La. (LBM) —“Nobody cares what’s happening to the Uyghurs, okay? You bring it up because you really care, and I think that’s nice that you care. The rest of us don’t care.” This appalling statement was made by Silicon Valley billionaire Chamath … END_OF_DOCUMENT_TOKEN_TO_BE_REPLACED