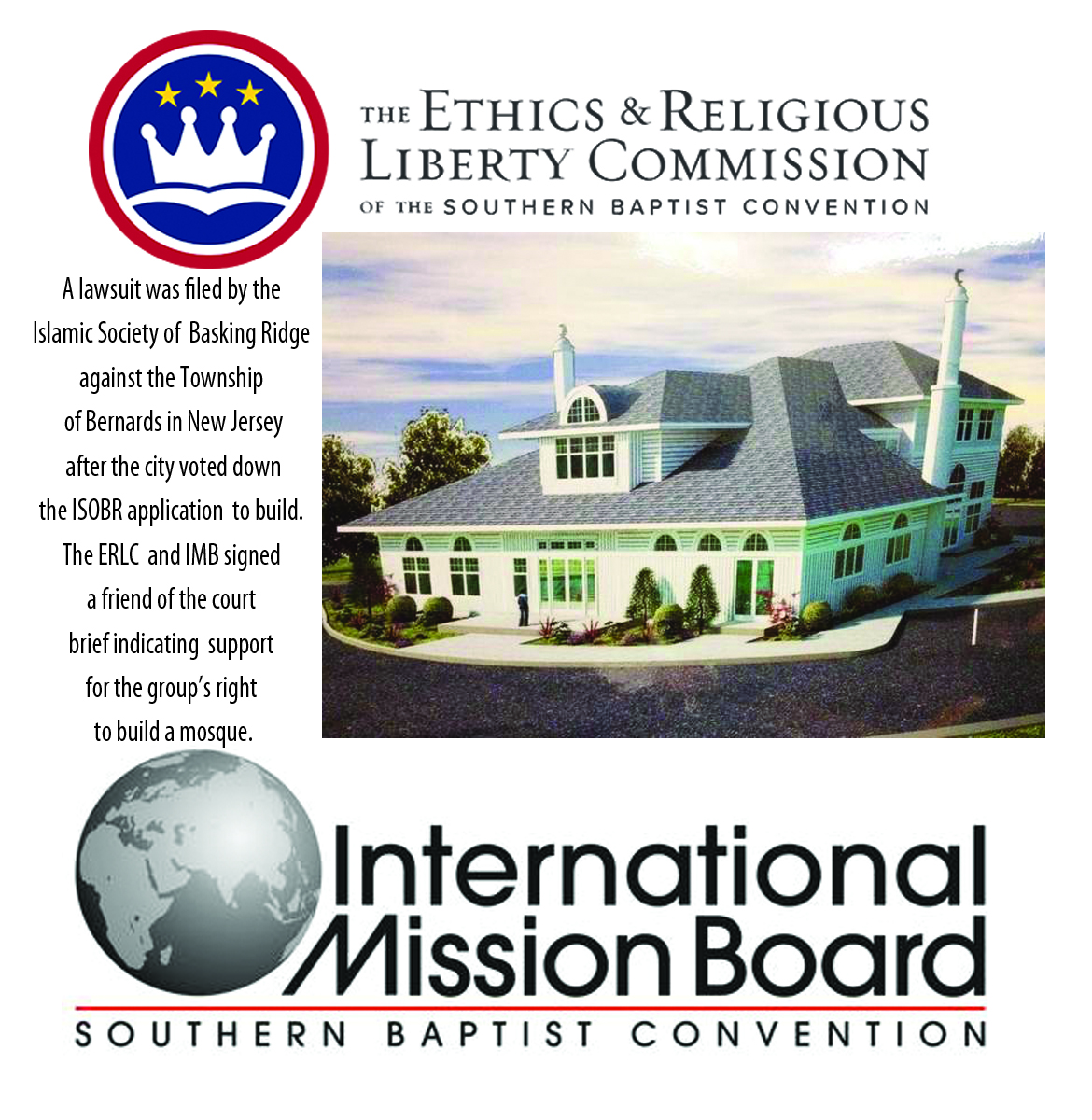 ALEXANDRIA – A controversy has erupted about two Southern Baptist Convention entities – the Ethics and Religious Liberty Commission and the International Mission Board – that signed a friend of the court brief indicating support for the right of a Muslim group to construct a mosque in New Jersey, raising questions about misuse of Cooperative Program dollars and concerns about proper prioritizing in representing the interests of Southern Baptists by these national ministries.

Both SBC entities have said it was important for them to participate to show support for the religious liberty of all people, including Muslims. Additionally, the IMB issued a brief statement clarifying that it has not contributed money or personnel to build the mosque.

The court case involves a lawsuit by the Islamic Society of Basking Ridge against the Township of Bernards, a community with a population of about 27,000 located about 36 miles outside of New York City. According to a legal brief filed on behalf of the Muslim group, the ISBR has sought permission since September 2012 to build a mosque in Basking Ridge, a community within the municipality of Bernards.

During December 2015, the city voted down the ISBR application to build on a 4-acre plot it had purchased in what is described in a local news report as a “historic section” of the township. The city planning board cited problems with the building plans, including: a lack of a “satisfactory buffer” with residential neighborhoods which abut the property on three sides; “width of parking spaces” and a poor layout of driving lanes; “a non-compliant storm water plan”, and, “insufficient access for fire and emergency vehicles.”

Patch.com also noted the displeasure of at least one planning committee member that despite “three and a half years of discussions” the Muslim group “had an opportunity to meet the guidelines, yet they failed to comply.”

The lawsuit, however, accuses the township of “unequal treatment” of Muslims.

Specifically, the amicus brief alleges “vagueness” in the city planning codes, and, complains the planning board has “unbridled discretion” and is subjecting Muslims “to a different legal standard than every other house of worship in the community.”

At least one Baptist leader in New Jersey disagrees with the lawsuit signed onto by the ERLC and the IMB.

A former president of the Baptist Convention of New York, whose fellowship of churches includes congregations in this part of New Jersey, told Baptist Press that a Baptist church in the same township attempted a similar process “a few years back,” only to be voted down by the planning board.

“The church spent hundreds of thousands of dollars only to be told that their site plan did not, and probably would never, meet all the requirements. Local residents raised even more money to defeat them,” he said by email, asking not to be identified by name. He added that Bernards residents were generally opposed to “any new religious facility being built in their backyards” and that in the end, unlike the Muslim group, the Baptist church opted against a lawsuit.

He said although the planning board’s decisions related to new church construction did not always sit well with him, “at least they are consistent.”

A prominent Baptist state paper editor took issue with the ERLC on the matter, questioning whether Southern Baptists should be part of such legal action even if in the defense of religious liberty for all, because Islam is “a movement that aggressively militates against other religions.”

Harris also accused the ERLC of defending the “religious liberty of Muslims in New Jersey” but failing to help Georgia Baptists in their “quest to pass religious liberty legislation earlier this year.” Georgia Baptists had backed a pastor protection act that would have prevented the state from forcing pastors to perform same-sex wedding ceremonies – a bill passed by the legislature but vetoed by the governor.

Meanwhile, two pastors attending the recent SBC annual meeting, which was held in St. Louis, Missouri, offered motions critical of the mosque amicus brief. One asked for SBC leaders who signed the document to be removed from office, and the other asked the SBC to withdraw the friend of the court brief. Both were ruled out of order because they exceeded the authority of the messengers at the Convention.

The International Mission Board issued a brief statement June 11 on its website clarifying that it “supports freedom of religion for all people both in the United States and around the world.”

“IMB signing the amicus brief regarding the New Jersey mosque is an agreement that all people deserve religious liberty, but it does not in any way support the mosque financially or with human resources.”

This short comment was posted among other responses to issues addressed on the “IMB Frequently Asked Questions” page.

Meanwhile, Russell Moore, president of the Ethics and Religious Liberty Commission, defended his position at the 2016 SBC Annual Meeting after being challenged about his support for building the mosque.

Pastor John Wofford of Armorel Baptist Church in Arkansas asked Moore whether Jesus would have supported “the rights of Baal worshipers to erect temples to Baal?”

Moore responded “soul freedom for everybody” is a Baptist distinctive and argued that a government which decides “whether or not a house of worship can be constructed based upon the theological beliefs of that house of worship” would mean “Southern Baptist churches in San Francisco and New York and throughout this country who are not going to be able to build.”

“A government that has the power to outlaw people from assembling together and saying what they believe – that does not turn people into Christians, that turns people into pretend Christians and it sends them straight to Hell,” Moore said.

Wofford was not afforded the opportunity to respond to Moore because officials turned off his microphone. But he subsequently wrote a letter published in The Arkansas Baptist News saying for him the issue is not a civil government matter as Moore contends, but a spiritual one.

Specifically, he said the primary reference for Christians should not be the First Amendment but the First and Second Commandments of God, and, he differed with Moore’s interpretation of the eternal consequences of the issue.

“As a preacher of the Gospel of Jesus Christ, I desire to see men ‘turn from their idols and serve the living and true God,’ he wrote. “Why then would I waste my efforts or money in helping them to erect places of false worship which keeps them under condemnation and invalidates my witness of the One True God?

“I guess you could say that I am in business to save the souls of men, I am not in business of helping them go to Hell.”