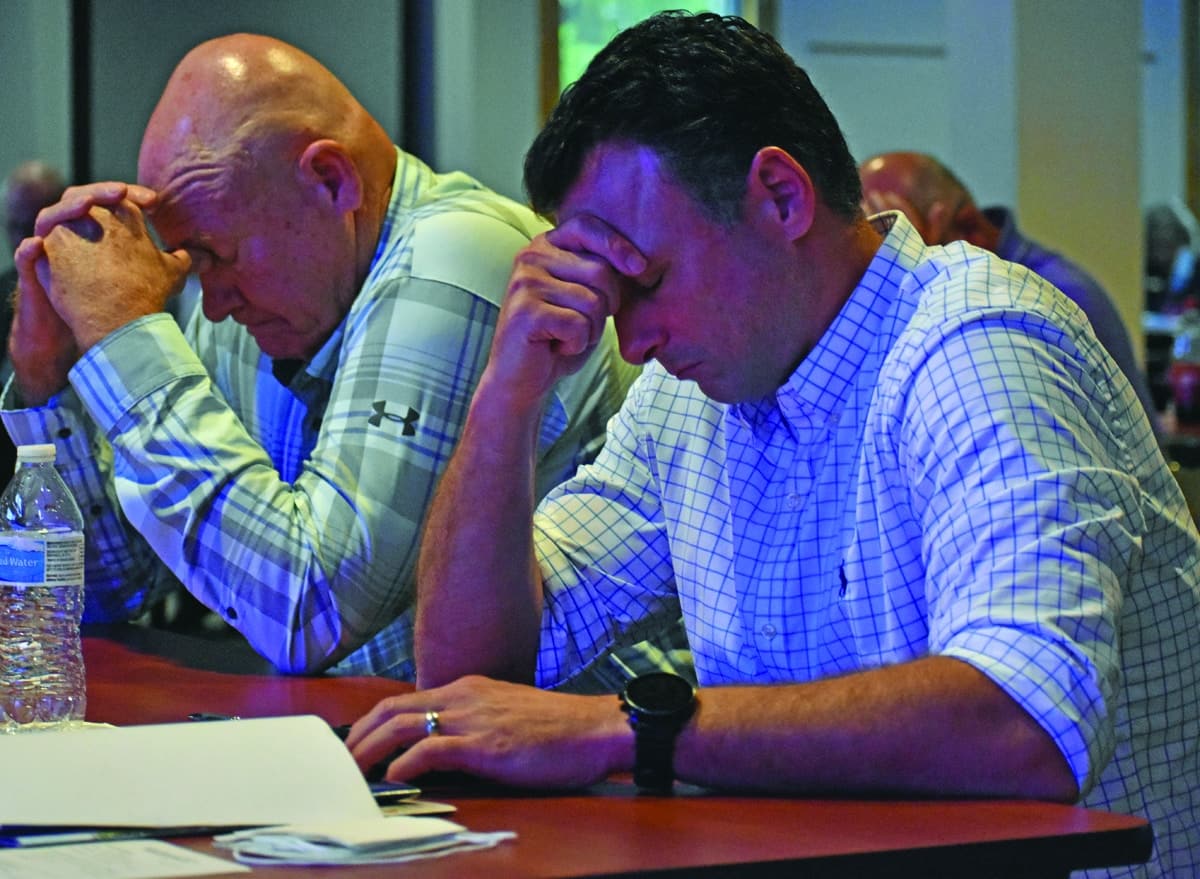 Louisiana Baptist Executive Board members devoted a portion of their meeting, Sept. 28, to pray for pastors and churches impacted by Hurricane Ida, which made landfall Aug. 29. Brian Blackwell photo

Horn distributed copies of his newly published devotional, Change Me, and invited the Executive Board to be part of the 28-day experience that is shaped to spur personal revival. He also thanked those who have led and responded in the wake of Hurricane Ida, and shared a large portion of the time allotted for his report to allow disaster relief officials to present an update on recovery efforts.

“It’s one thing to just hear a report but it’s another thing to be encouraged that mission dollars that have been given through churches, individuals, other state conventions,” Horn said in a prayer he led at Tall Timbers Baptist Conference Center in Woodworth.

He asked anyone present who had been impacted by the hurricane to stand, and for the remaining Executive Board members to silently pray for them.

“We rejoice in the salvations, some 150 that have been reported, over 500 Gospel presentations, we rejoice in that,” Horn prayed. “I know there is a different feeling for these individuals standing before us. I pray for each of these standing now. God would you encourage them. Would you give them hope for a bright future. Would you remind them this day they are never alone. And would you send others to help them to be positioned to be better than ever before.”

Louisiana Baptist Disaster Relief strategist Stan Statham shared that 32 state conventions were deployed to the state at various times to minister at 13 sites. He said that since Aug. 29 there have been 150 professions of faith and 935 Bibles distributed through late September. Moreover, the multiple feeding units had prepared 704,762 meals, completed 672 chainsaw jobs and installed 297 tarps on homes, he added. Moving forward, Statham said additional work will focus on areas hit hard by the storm further south.

“Pray as we continue in the work,” Statham said. “We have a lot to do. Our system is not perfect. We learn and grow from these and we will continue to make changes. But I’m grateful for all our volunteers. Thank you to our staff at the Louisiana Baptist Building. In these things almost every person is tasked with something. It’s all hands on deck.”

Louisiana Baptist State Missions and Ministry Team Director John Hebert added that 83 pastors’ homes and 116 churches were damage., including 28 congregations which sustained catastrophic losses. Hebert said state missions services staff traveled to churches and delivered $500 to each pastor who had lost homes, cars or belongings. In all, $42,000 was distributed from the pastoral leadership fund.

He expressed appreciation for the Georgia Barnette State Missions Offering committee, who approved distribution of offering funds to pay an additional $100,000 for disaster relief expenses in order to continue the massive disaster relief operations. Hebert added that another $305,000 was given by other state conventions, partners in ministry and individuals, and he said these funds will be shared among the 116 damaged churches.

Board members approved the business and finance committee’s 2022 financial plan based on Cooperative Program contributions of $17,626,136, a decrease of $1,027,564, or 5.5 percent. Cooperative Program projections are based on actual receipts from August 2020 through July 2021. The allocation formula for distributing Cooperative Program gifts between the Southern Baptist Convention and Louisiana Baptist causes remains unchanged, 63.26 percent to support ministries in the state and 36.74 percent forwarded to fund national entities. The budget will be presented to messengers for approval during the 2021 LBC Annual Meeting.

By Lane Corley MADISONVILLE, La. - Three years ago, our family was going through one of those down seasons in the ups and downs of life. My mental focus and physical health was declining. I was discouraged and struggling mentally and emotionally. I knew I needed to change a few habits. As part of a recovery … END_OF_DOCUMENT_TOKEN_TO_BE_REPLACED