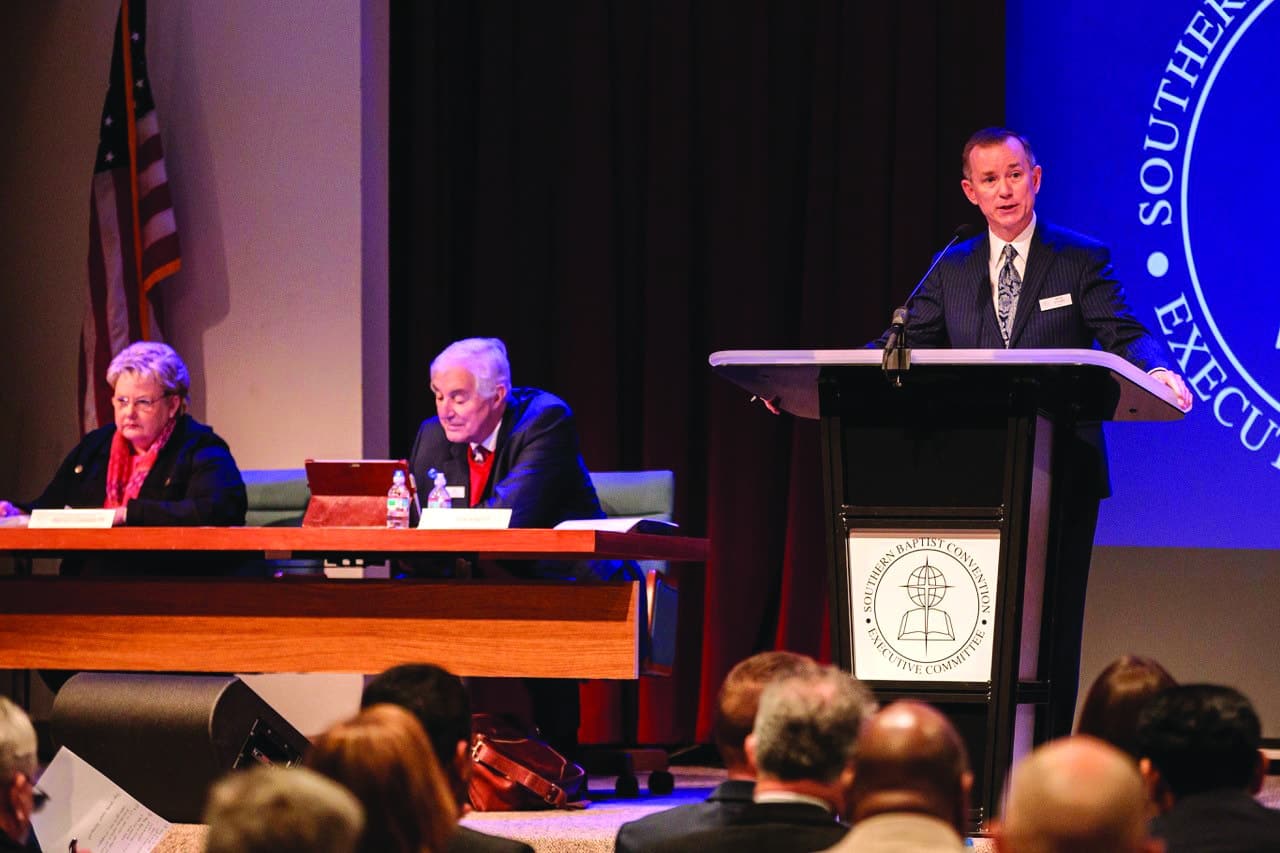 NASHVILLE, Tenn. (LBM) — The Executive Committee of the Southern Baptist Convention released its task force report about the impact of the Ethics and Religious Liberty Commission on the funding of cooperative missions and ministries of Southern Baptists.

Stone formally presented the report to the SBC Executive Committee during its Feb. 22-23 meeting in Nashville, Tennessee.

The published report set the framework for Stone’s comments by sharing that 15 of the 41 state Baptist conventions had responded to a survey from the task force. “These 15 conventions serve 28,379 congregations, or 60 percent of the churches in friendly cooperation with the SBC,” the report stated. Importantly, these churches also represent 74 percent of the gifts to SBC national causes, or $139,799,636 of $187,806,636 of the Cooperative Program funds distributed at this level.

The report also shared examples of how “‘a perceived leftward or liberal drift generally,’ which includes concerns related to the ERLC” has led to withholding of Cooperative Program gifts and even departure of churches from state and national conventions — affecting 250 churches in one convention, 94 in another and 46 in a third, for instance.

Churches reported concerns such as the “silence” of the ERLC “during the violent and destructive protests that swept the entire nation for months beginning in the summer of 2020.”

Meanwhile, the report noted ERLC’s “posture of non-cooperation with this task force” regarding an error-filled amicus brief the ERLC filed with the 5th U.S. Circuit Court of Appeals for the lawsuit, McRaney v. North American Mission Board. The legal brief wrongly described the SBC as a “hierarchy” that serves as an “umbrella Southern Baptist governing body over all the various groups of churches.”

The report further stated that the ERLC’s efforts “to begin correcting this error with the court came 117 days, nearly four months after the ERLC knowingly filed an erroneous brief” and added that the ERLC did so “only after substantial pressure from this task force and others.”

The 11-page document concluded with five “findings” and six “recommendations.”

The task force found that: there was confusion among Southern Baptists about increases and decreases in CP giving; the ERLC is both “appreciated” and a source of “significant distraction”; ERLC’s handling of the controversial amicus brief was “unacceptable”; without quick and significant changes by the ERLC, there is “the potential for a measurable [CP] decline in the near future and beyond”; and, there is “considerable conversation … as to whether the ERLC is the most effective and efficient structure and means for addressing the public policy concerns of Southern Baptists.”

They recommended: the SBC Executive Committee provide “clarity about Convention-wide giving trends”; the ERLC “focus, where possible, on speaking where the Southern Baptist Convention has already spoken”; the ERLC “refrain from opposing specific candidates for public office”; the ERLC “be more responsive to requests from Southern Baptists”; the ERLC “demonstrate a greater appreciation for how its positions, including social media usage, affect the spirit of cooperation in the SBC”; and, that all entities submit legal briefs, “about the nature and work of Southern Baptists, to Convention attorneys, prior to their being filed.”

The task force report concluded the third investigation of the ERLC by the SBC Executive Committee. Two study groups also were formed in 2017 regarding concerns about the ERLC’s impact on the cooperative missions and ministries of Southern Baptists.

By Lane Corley MADISONVILLE, La. - Three years ago, our family was going through one of those down seasons in the ups and downs of life. My mental focus and physical health was declining. I was discouraged and struggling mentally and emotionally. I knew I needed to change a few habits. As part of a recovery … END_OF_DOCUMENT_TOKEN_TO_BE_REPLACED