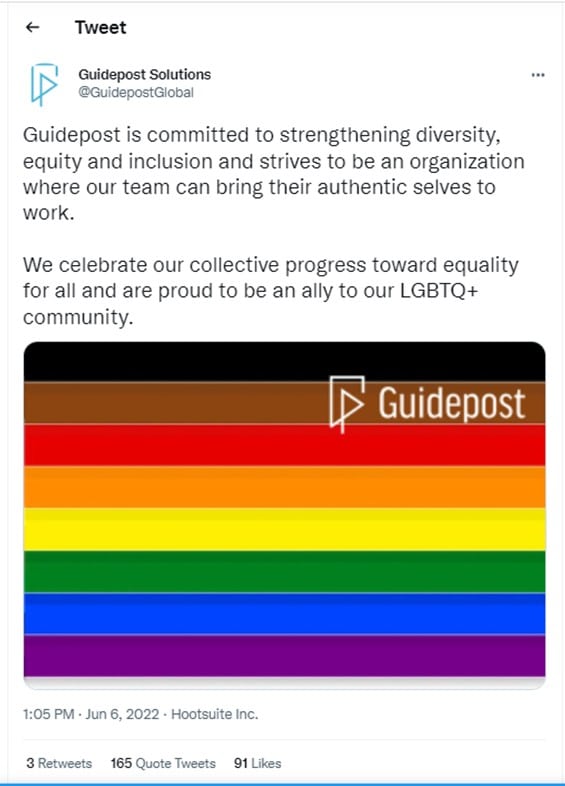 NASHVILLE, Tenn. (LBM)—A false claim was secretly edited out of the highly controversial, May 15, “Report of the Independent Investigation,” published by Guidepost Solutions, which now has revealed its pro-gay sympathies, tweeting July 6 that it is “proud to be an ally to our LGBTQ+ community.”

It is the second pro-gay group hired by the Southern Baptist Convention Executive Committee to deal with accusations of sexual abuse coverup.

The now-debunked accusation in the report was deleted on or before June 3, without an editor’s note to explain the change.

Guidepost described the conversation on page 105 of the report with a statement that “divisions within SBC leadership were clear,” while framing the conversation in the context of sexual abuse. Then, after describing the situation as “very adversarial,” Guidepost wrote, “In a recorded conversation on Nov. 16, 2019, Dr. Bethancourt took issue with a prior comment by Jim Richards; Mr. Richards had told Dr. Bethancourt: ‘If you want a war, we’ll give you a war.’”

Richards told The Texan that Guidepost wrongly made it seem he opposed efforts within the SBC to create structures of accountability regarding sexual abuse. He said, instead, the comment was made in reference to a dispute about ERLC’s insistence in scheduling a Texas event on the same date as the SBTC’s annual meeting.

After other attempts to fix the errant allegation were unsuccessful, he reached out to Bethancourt who, according to The Texan, explained to Guidepost that Richards’s comment “was not related to sexual abuse at all.”

The offending paragraph subsequently was removed without comment from Guidepost or the SBC EC.

The misrepresentation of Richards’s comment is not the only error contained in the $2.1 million plus Guidepost original report.

In describing former SBC attorney Jim Guenther, Guidepost wrongly identified him: “Mr. Guenther had provided legal advice since 1966 and began in 1998 as Vice President for Convention Policy before becoming General Counsel in 2004.”

Guenther indeed served Southern Baptists from 1966 until 2021, but he was not a vice president with the SBC EC, nor the general counsel on staff. Both of those titles were held by Augie Boto, another party to Guidepost’s criticism. Guenther only served as outside counsel for Southern Baptists.

Moreover, Guenther and his law partner Jamie Jordan called out Guidepost in a 266-word response for what they described as “misstatements of fact and quotations from us which are misleading because they are reported out of context.”

“We disagree sharply with many of the characterizations in the report and its assignment of ill will and bad motives to men and women of the Executive Committee who struggled year after year with complex issues,” they wrote. “In our experience, nearly all of these individuals were motivated by a deep desire to give their best service to the Southern Baptist Convention and to be good stewards of the trust placed in them.”

“There is nothing sinister about it,” they wrote. “It does not corrupt justice; it creates the space for justice.”

Under Guenther’s 56-year legal representation, the SBC did not lose a single case.

Oldham said that he forwarded about 75 news alerts — articles about men who had been publicly accused, arrested and convicted, and not rumors or reports of alleged abuse needing investigation — during a 10-year period to Augie Boto, the SBC EC staff general counsel, and noted that “most were not Southern Baptist-related churches; but some were.”

“Of those that were, several were stories that received broad national media coverage and were covered through Baptist Press as well,” he wrote in an open letter.

Oldham mentioned two lists in his response to Guidepost:

— The official National Registry of Sex Offenders compiled by the Department of Justice, described by the DOJ as “an unprecedented public safety resource that provides the public with access to sex offender data nationwide.” This database had been linked to on SBC.net in 2007 along with other resources to aid churches in sexual abuse prevention.

“The most recent list prepared by the EC staff member contained the names of 703 abusers, with 409 believed to be SBC-affiliated at some point in time,” Guidepost wrote. “Our investigative team reviewed the list and conducted significant research to assess whether any of the alleged abusers were still associated with an SBC church. Based on these efforts, it appears that nine (9) people remain in active ministry or connected to ministry. Two (2) of those people appear to be associated with an SBC church. The remaining seven (7) appear to be associated with churches that are not SBC-affiliated.”

Despite concluding that only two of 703 people on the informal list were still “in active ministry or connected to ministry” and “appear to be associated with an SBC church,” Guidepost excoriated the SBC EC for not taking “any action to ensure that the accused ministers were no longer in positions of power at SBC churches.”

Southern Baptist messengers are slated (during the evening session of the 2022 SBC Annual Meeting, Tuesday, June 14) to consider a set of recommendations from the Sexual Abuse Task Force based on the Guidepost report.