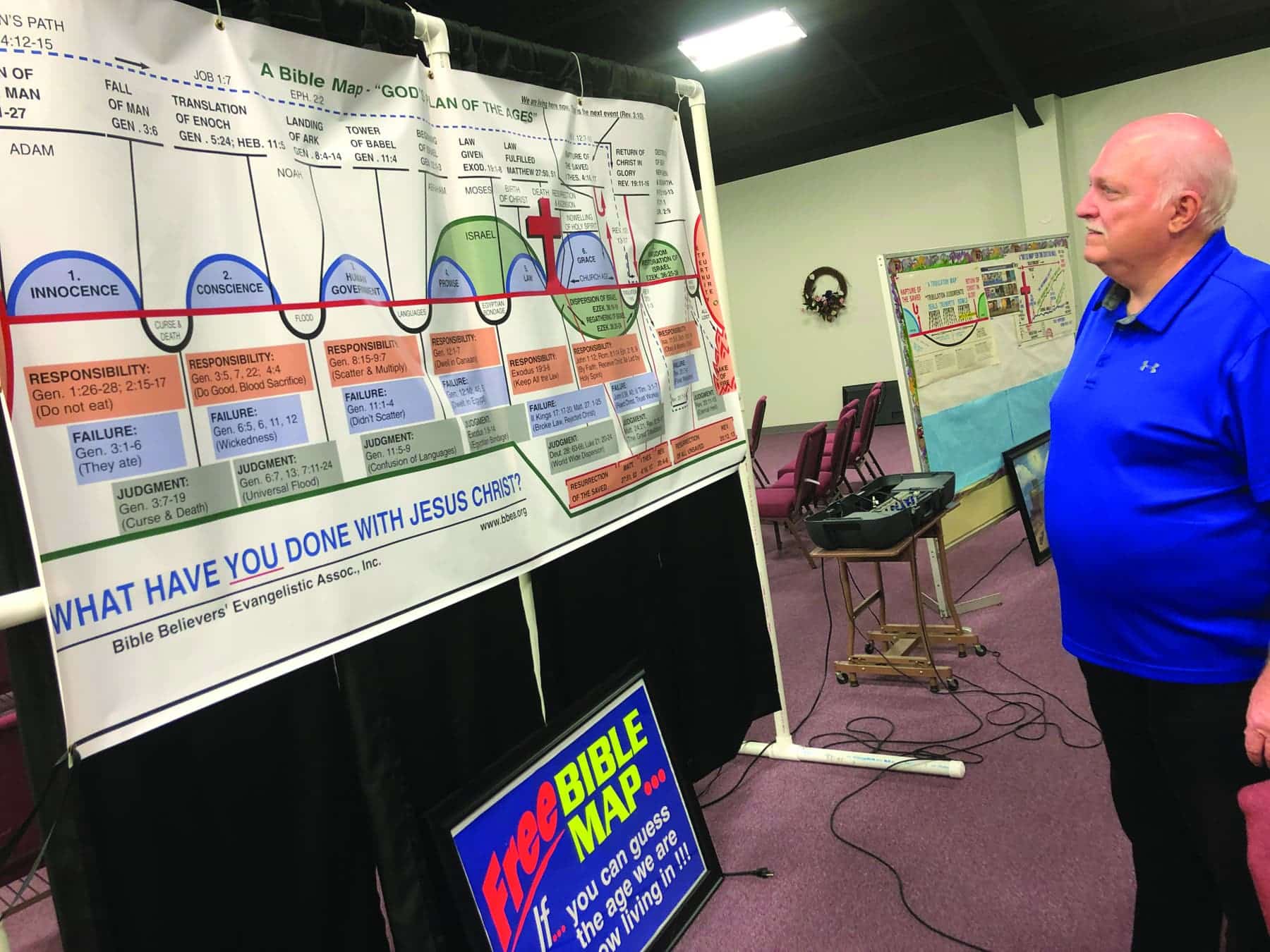 Pastor John Astling shares this Bible map with funeral attendees who sometimes tour the church facilities; each encounter opens conversations for him to share the Gospel. Norm Miller photo

LAKE CHARLES, La. (LBM)–University Baptist Church in Lake Charles escaped the brunt of Hurricane Laura’s wrath and has since become a haven for three other congregations who were not spared.

“We saw the needs of other churches that were damaged beyond use,” said UBC Pastor John Astling. “And we wanted to help them get back to worshiping again – get back to some sense of normalcy.”

At staggered times every Sunday, UBC opens its facilities to three other Lake Charles churches: Emmanuel Baptist and its Hispanic mission, as well as Calvary Baptist Church.

“Zeb Johnson has done so much for our community that I just jumped at the chance to help him,” Astling explained. “His benevolence toward law enforcement and the fire department and others is well-known in the community.”

Astling told the Baptist Message it is a tremendous opportunity because people are coming into UBC that congregants have not had a chance to touch with ministry before.

“The funerals have given us the chance to talk to people, witness to them, and to build relationships in the community,” he said.

Others are reconnecting with the church.

“We are seeing people in our church that we saw when we did disaster relief ministry,” Astling said. “This has made for great outreach in the community by deepening relationships. It’s helped us see beyond our own needs and see the needs of others.”

Astling urged other churches to consider opening their facilities not only to churches that may need them, but to civic groups as well. He said there is a Gospel opportunity because of the lack of meeting spaces in some parts of the state due to last year’s natural disasters.

“We’ve had various groups request to use the building, and we want to accommodate people as much as possible,” Astling said. “I’d definitely encourage this as a way to make inroads into the civic community that a church might not otherwise reach.”

By Lane Corley MADISONVILLE, La. - Three years ago, our family was going through one of those down seasons in the ups and downs of life. My mental focus and physical health was declining. I was discouraged and struggling mentally and emotionally. I knew I needed to change a few habits. As part of a recovery … END_OF_DOCUMENT_TOKEN_TO_BE_REPLACED