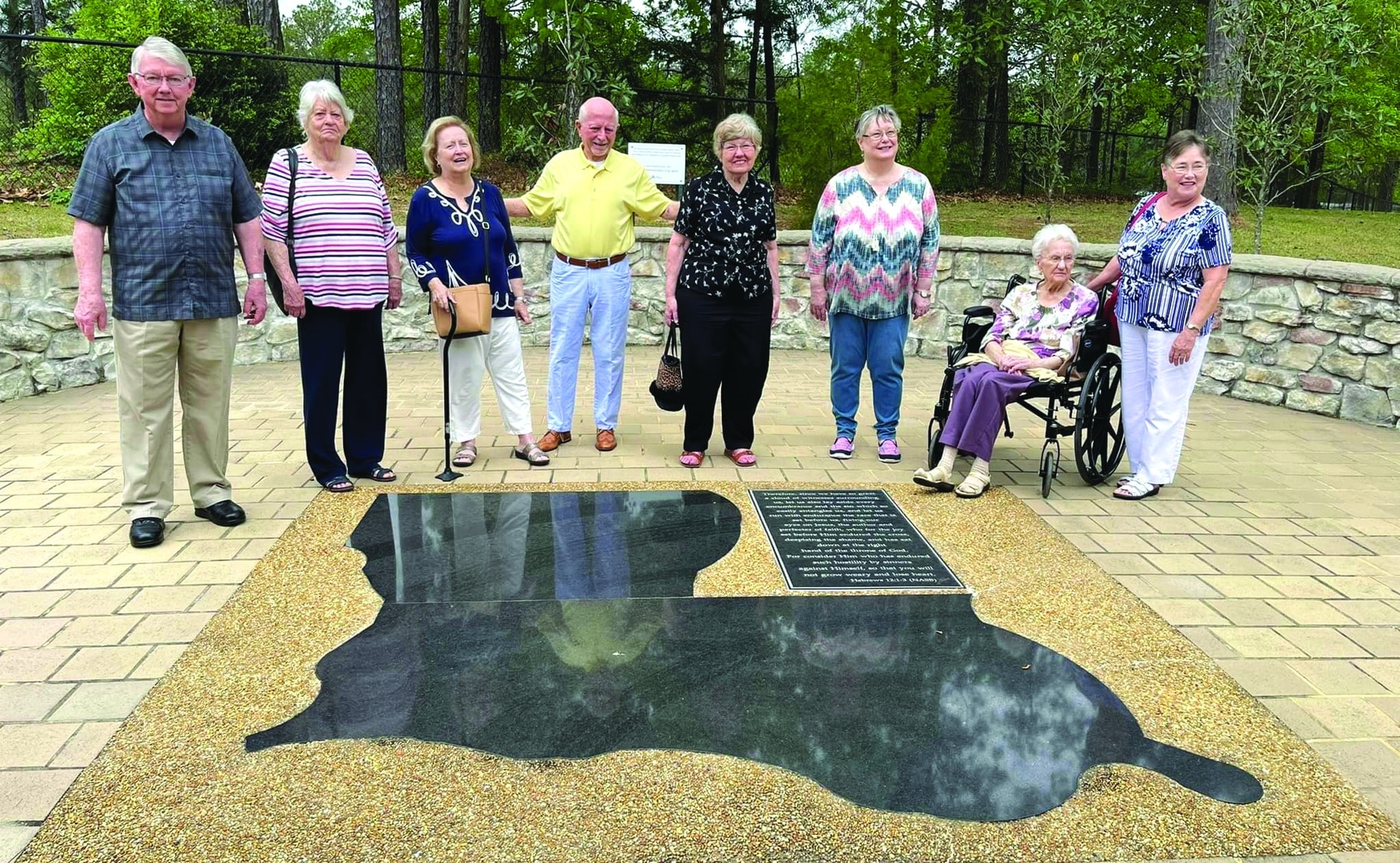 WOODWORTH, La. (LBM) – Doris Perkins, 99, recently paid a visit to the Georgia Barnette Conference Center prayer garden to view, for the first time, a brick that honored her missions-centered legacy.

Perkins, the only living charter member of Homewood Baptist Church, Alexandria, shared the moment with family and friends at the garden, which is a large walled terrace made of bricks, each purchased in 2016 to honor individuals and loved ones. The sale of bricks during construction of the GBCC helped offset costs of building the facility.

During their April 12 visit to the prayer garden, the group also viewed a brick that honored three other women (Lottie Knox, Essie Raxsdale and Mignon McDonald) who were leaders of the missions ministry of the church. All three women have since passed.

Though she no longer is active in the church’s WMU chapter, Perkins has remained steadfast in her support of missions. During her time at Homewood Baptist, Perkins served as the church’s WMU director and subsequently encouraged others to embrace a Great Commission mindset.

“It’s amazing that women have been dedicated in spreading the Gospel at Homewood Baptist Church,” Perkins told the Baptist Message during the April 12 visit. “They are still trying to teach new members of the church to know that the WMU really supports missions.”

Though her commitment to missions has never waned, it was tested when her daughter, Kala, and her husband, Steve Baillio, left in 1979 to serve in Honduras as International Mission Board missionaries. Baillio lauded his mother-in-law’s selfless support.

“She faced a crisis in her missions ministry, knowing her grandkids were coming with us and she wouldn’t see them as much,” Baillio said. “She worked through it to become one of the biggest supporters of us and our ministry.”

Homewood Baptist Pastor Jimmy Koonce said Perkins’s commitment to missions should be a reminder to everyone that sharing the Gospel from the church pew to the ends of the earth is a vital calling.

“We have these pavers for these ladies who have done so much for mission work and especially the WMU,” Koonce said. “We are so proud of them and glad they have their name here to honor them because they deserve it. We are still proud of our WMU ladies and what they do. We are very blessed.”

“The intention was to honor special people in our Louisiana Baptist churches – pastors, missionaries, Sunday school teachers – and to remember them from throughout our history,” he said. “This beautiful building is a place of worship for every week of summer camp where we see hundreds of children and youth become Christ followers and many others who answer the call to ministry. In the rich history of Louisiana Baptists, the legacy of Mrs. Perkins and the many others whose names are commemorated in the prayer garden continues right here as our Tall Timbers campers begin a journey with Christ.”

By Steve Horn, Louisiana Baptists executive director Jesus reminds us that we should always pray and never give up (Luke 18:1). Today’s ruling from the Supreme Court serves as a good reminder of that truth. For almost 50 years, American Christians from various denominational backgrounds have been praying and … END_OF_DOCUMENT_TOKEN_TO_BE_REPLACED