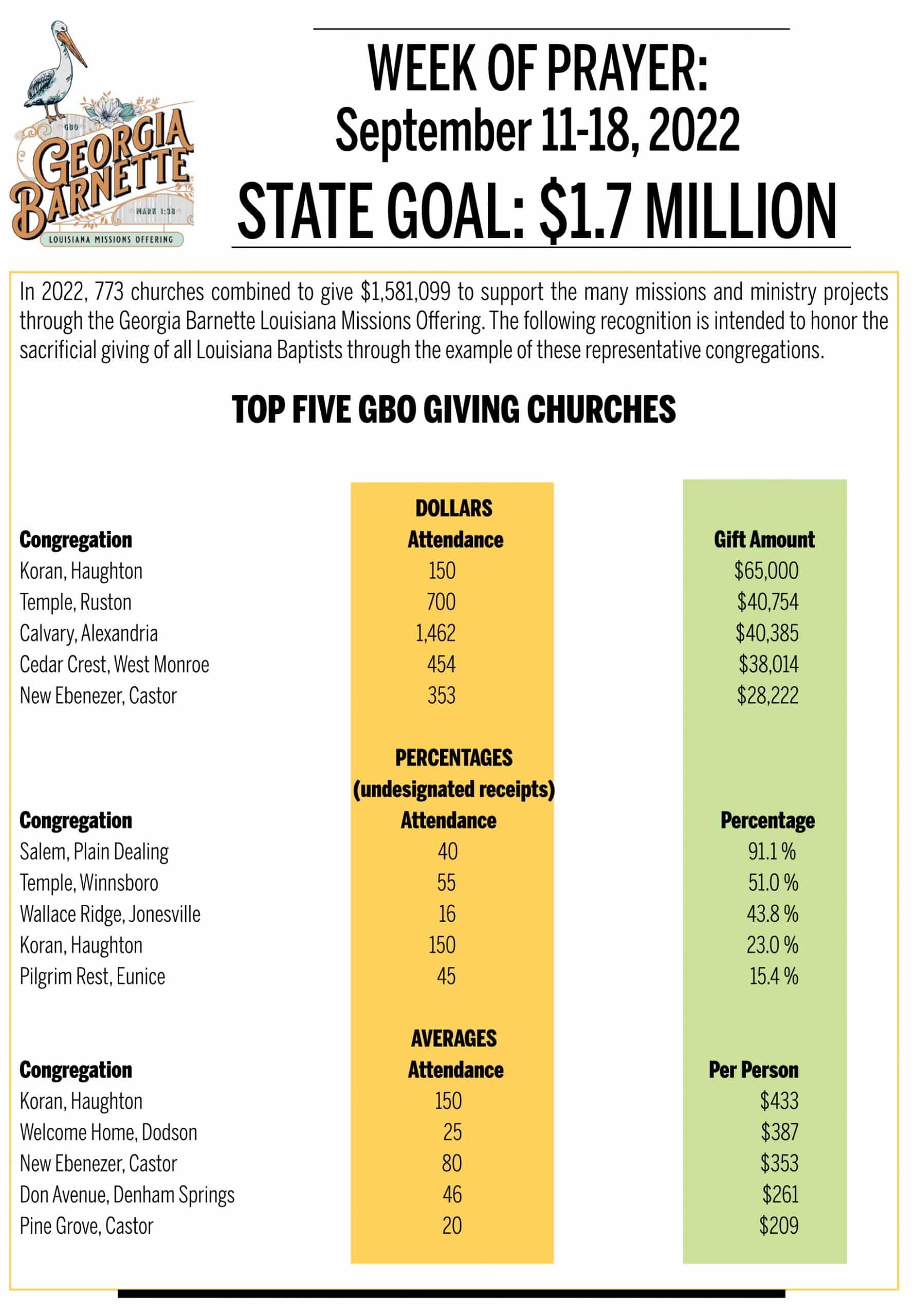 Arriving by train from Atlanta, Barnette remarked how moved she was by the landscape she saw. 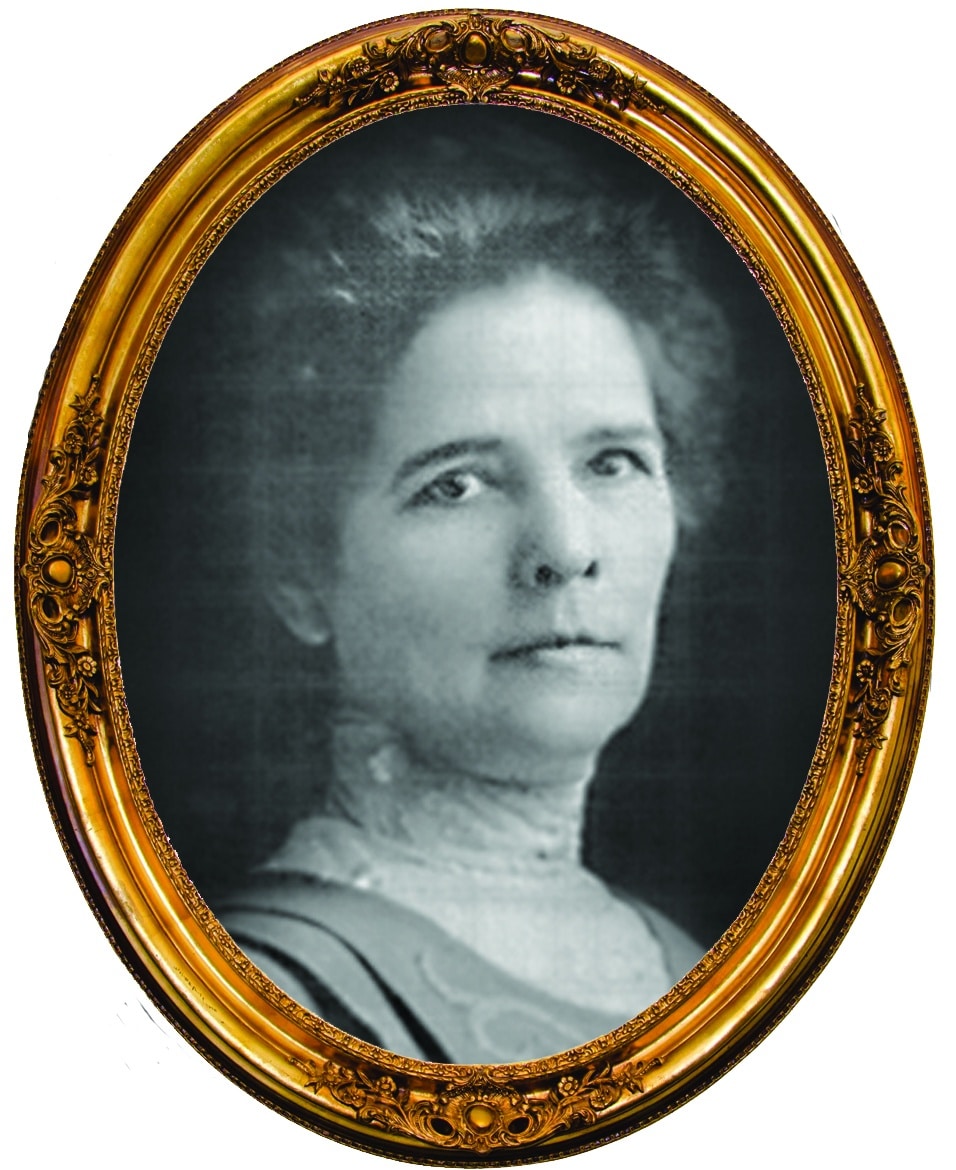 “Surely God loved Louisiana because He made it so beautiful,” she wrote to a friend.

Years later, after having retired from serving 25 years as the director of the Woman’s Missionary Union in the state, and awaiting her last breath, she lay in her bed praying for her “beloved Louisiana people.”

In between these two bookends in her life, Georgia Barnette was motivated by her “value of one soul” and tirelessly worked to build up the body of Christ and minister to those in need, while inspiring Louisiana Baptists to take the Gospel across the state.

Her legacy of love for Christ and the people of Louisiana continues through the state missions offering that was named for her in 1936.

The goal for the 2022 Georgia Barnette Offering is $1.7 million, an amount that supplements what Louisiana Baptists give through the Cooperative Program, the primary funding channel for state and national Baptist causes.

for state and national Baptist causes. CP gifts provide the “fuel” for all the cooperative missions and ministries of Louisiana Baptists, meanwhile, the GBO provides support for specific operations.

Some of the largest ministries that benefit from the GBO are disaster relief and church planting, both critical efforts in the state:

— During the last two years, Louisiana Baptists have been engaged in prolonged recovery operations after four hurricanes.

— Meanwhile, Louisiana Baptists are about to celebrate their 300th church planted since 2010 as part of the President’s 2020 Commission Final Report goals (delayed by two years due to COVID-19 restrictions).

On top of that, Louisiana Baptists are about to launch Vision 2030, and a primary goal is to grow from 1,569 congregations to 2,000 constituted churches, with church planting a major factor in the initiative. GBO gifts will figure prominently in reaching this goal and in baptizing 25,000 new believers, also a part of the vision.

Indeed, gifts to the GBO support a wide range of cooperative missions and ministries of Louisiana Baptists: offering help to women and children who have been rescued from sex trafficking; providing groceries to families in dire need; giving hope to men and women formerly trapped by addictions; and discipling students on college campuses across the state.

One of the most unique and effective of the GBO-supported ministries of Louisiana Baptists is a statewide multimedia campaign, “Here for You!” — and it is impactful.

Ads featuring different scenarios of life, sometimes posing deep questions and other times showcasing a positive Christian response, each end with the tagline, “Louisiana Baptists are here for you!”

John Kyle, director of communications for Louisiana Baptists and the creative force behind the “Here for You!” campaign, said the messages are designed to engage the unbeliever.

“We want the ‘nones,’” Kyle told the Baptist Message. “Sometimes our people don’t see the ads because they aren’t our target.

“We aren’t even trying to buy ads on Sunday morning television,” Kyle explained. “We are trying to get in as many hearts and homes [of unbelievers] as many times as we can. If someone thinks about church, they will do it later in the week, so the ads run Wednesday to Saturday.”

The campaign reaches almost 94 percent of television households, and strategic ad buys — such as during the Super Bowl – give even more visibility to “Here for You!”

But television is not the only media focus.

“Here for You!” also has a strong internet presence.

“We are averaging a reach of 187,324 people monthly through social media and streaming services,” Kyle said.

Moreover, because of a partnership with the Billy Graham Evangelistic Association, the television presence and social media push don’t just give visibility to Louisiana Baptists, but people are giving their lives to Christ because of the multimedia effort.

Kyle said the ads point viewers to the BGEA for prayer and contact with trained counselors who share the Gospel. He added that the partnership has resulted in a harvest of souls in Louisiana.

“Their records show there have been 18,602 views of the Gospel presentation from our state since 2019, and 3,570 people have indicated decisions for Christ,” he said.

“We are the only state Baptist convention they are partnering with,” Kyle added, noting that the BGEA continually works to improve its internet strategy — sometimes making simple tweaks that pay big dividends.

“They advised us to change our wording from ‘Find God’ to ‘How to find God’ and we had our highest number of Louisiana visitors to the landing page last month than we had in any one month during the previous 19 months,” Kyle noted. “Right now, we are averaging 400-500 views of the Gospel a month, but I’d like to get that to 1,000. Keeping the ratio [a third], we would see 300 people a month indicate decisions for Christ.”

The Louisiana Missions Offering ensures the legacy of Georgia Barnette’s passion for the people of our state will continue to result in the evangelization of the lost.

Last year, our 1,569 congregations combined to baptize 5,631 new believers, despite coming out of two years of COVID-19 restrictions and while still recovering from the cumulative effects of four hurricanes, multiple tornados and two major ice storms (with 135 church facilities and 69 pastors’ homes damaged or destroyed by Ida alone).

In that light, Barnette’s encouragement to a friend remains salient to Louisiana Baptists today.