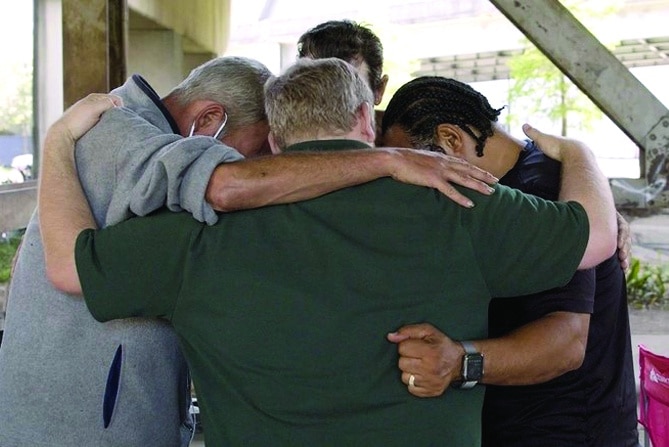 Jacob Crawford, director of City Life NOLA, joined others in prayer for the lost to discover the hope found in Christ. Submitted photo

NEW ORLEANS, La. (LBM) – Bobbie Wallace was headed on a path of hopelessness when he was sentenced to a 66-year sentence on two counts of armed robbery, but his Georgia Barnette Offering assists Angola graduate to pursue his ministry dream life was forever changed when he found restoration through Christ inside the walls of the Louisiana State Penitentiary at Angola.

Through the encouragement of New Orleans Baptist Theological Seminary staff and other Louisiana Baptists, Wallace earned his bachelor’s degree through the seminary classes taught in the prison and became a sold-out follower of Christ.

Wallace, who miraculously was released in 2014 after only 20 years at Angola, used the years of biblical knowledge gained inside the prison to become a missionary outside the walls and eventually met Jacob Crawford, director of City Life NOLA.

Crawford presented Wallace with the opportunity to offer the hope of Christ to others in the city who were struggling and overlooked. Since 2020, Crawford has helped former Angola inmates like Wallace grow deeper in their faith and participate Jacob Crawford, director of City Life NOLA, joined others in prayer for the lost to discover the hope found in Christ. in missions opportunities in New Orleans.

“I believe that the Lord has a special calling on these men’s lives,” Crawford said. “God has put them in positions of influence, and they have a heart for Jesus and His church.”

Crawford’s three-fold vision is to equip formerly incarcerated individuals and others in the city with the tools to make more disciples of Christ, to establish a network of Bible studies, and, to help form small, simple churches.

Crawford expressed his appreciation to Louisiana Baptists for their continued commitment to the Georgia Barnette State Missions Offering.

Crawford said, “There would be no way for City Life NOLA to do what we do without the Georgia Barnette State Missions Offering. Communities are being transformed by the Gospel of Jesus, because of your faith-fulness in giving.”

For more information on mission opportunities or how to support City Life NOLA, visit citylifenola.com. Sept. 12-19 has been set aside as the “Week of Prayer” for state missions and ministries. Resources, including videos demonstrating the scope and impact of the Georgia Barnette Offering have been mailed to churches across the state. Additional resources are available online at www. GeorgiaBarnette.org. This year’s offering goal is $1.7 million.