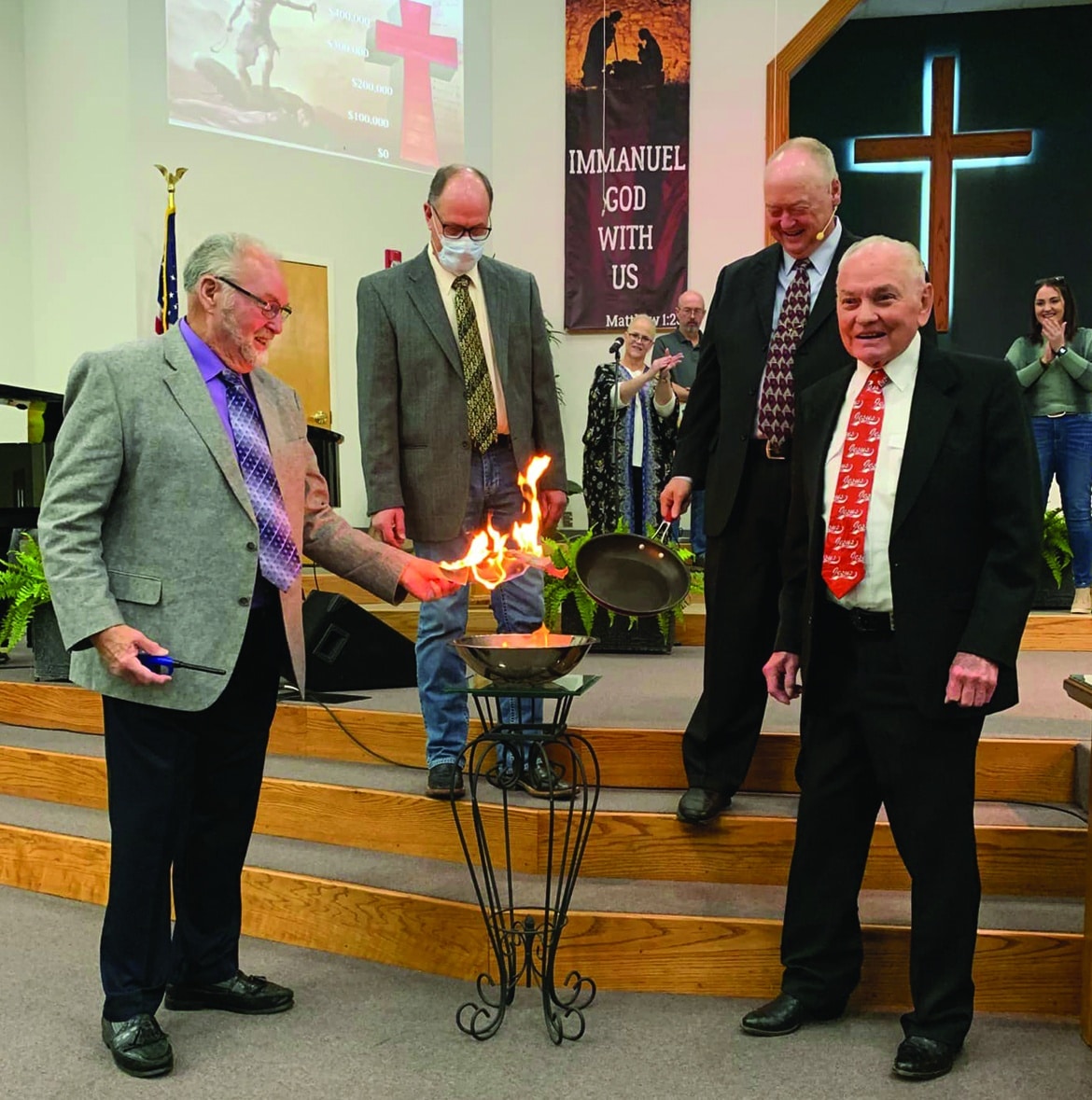 Ouachita Baptist Church celebrated a note-burning, Jan. 9, and remembered God’s faithfulness to bring them out of massive debt. Submitted photo

WEST MONROE, La. (LBM) – Ouachita Baptist Church recently celebrated the retirement of $735,000 in debt on their worship center and fellowship hall. Members rejoiced during a special note-burning service, Jan. 9, especially noting God’s faithfulness to them during the six-year journey.

“I’m just so proud of my church and what God did through them,” Pastor Mike Holloway told the Baptist Message. “The financial burden is lifted, and the future is bright. We are not the church we were five years ago, but we aren’t the church we are going to be five years from now.”

When Holloway arrived as pastor in January 2016, the church was struggling to pay the monthly note. A year later, Holloway presented “2020 Vision,” a plan to retire the remaining debt of $500,000 within four years. COVID caused a one-year delay in reaching the goal, but the note was paid in full, Jan. 9.

Ray Anding, a member of the church since its founding 37 years ago, was honored to be one of the two members who paid off the remaining $30,000 prior to the note-burning service.

“Everybody was clap[1]ping; we were on cloud nine,” Anding said. “We remembered how God has blessed our church. Prayer and reaching out to others have been so important during the last few years as we worked together to pay off this loan.”

Holloway said the bold step of faith by the congregation has produced much fruit. When they began the ambitious plan, 50-60 attended Sunday worship and missions giving was down. By the end of 2021, attendance had grown to nearly 200 and giving to efforts to further the Gospel similarly increased.

Holloway said members have become more enthusiastic about sharing the Gospel through prayer, door-to-door evangelism, tent revivals and a ministry to people addicted to drugs, alcohol and other destructive lifestyles. He said they now regularly participate in mission efforts in the Ukraine, the Navajo reservation in New Mexico, Malawi and Zambia. Holloway said retirement of the debt has freed up the congregation to purchase a $9,000 church facility for a Zambian congregation, and he expects even more opportunities to give.

“Our church is built on prayer, outreach, evangelism, conservative preaching and genuine worship,” Holloway said. “Evangelism still works. The word of God won’t return void. How will they believe without a preacher, or unless someone goes and tells them? We practice the Great Commission here and paying off this debt has now freed us to do even more in missions to share the Good News around the world.”

By Jill Waggoner, ERLC WASHINGTON, D.C. (ERLC) - Richard Land served as the president of the Ethics & Religious Liberty Commission from 1988–2013. Prior to his time at the ERLC, he worked in a variety of church and political roles, many of which were involved closely with the modern pro-life movement in its … END_OF_DOCUMENT_TOKEN_TO_BE_REPLACED