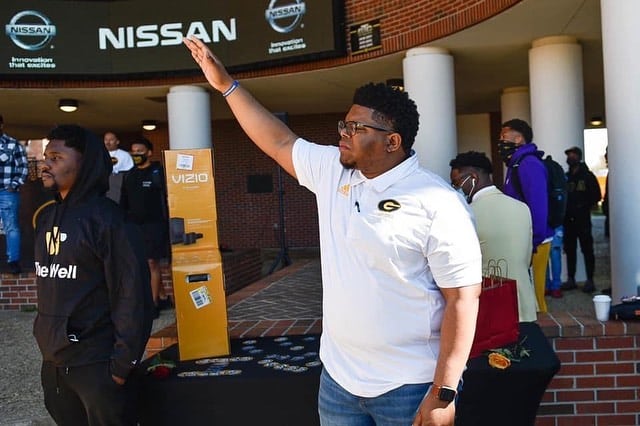 What followed was a movement of the Holy Spirit that helped bring healing to a hurting community.

Around 60 students participated in a time of prayer on Oct. 21 at the Springs Church, a church plant of Temple Baptist Church, Ruston. Two students at the event restored fellowship with the Lord and many more cried out to God for an end to the violence during the service at the church that is less than four miles from the Grambling State campus.

“God has a way of using tragedy for His glory,” Grambling State BCM uses Gospel to heal campus Lee told the Baptist Message. “When there is loss of life there ought to be an appreciation for life. We ought to appreciate every moment we’re given.”

“The campus got closer in the days following the shooting and the worship service,” he continued. “Prayer began to be more and more a part of students’ lives. I spoke with several students on the heels of that tragic event who shared how that incident basically was the straw that broke the camel’s back. An incident like that was so jarring that it led them to talk about other issues that they were dealing with, and it pointed several students to Jesus that week.”

Since the service, Lee and his students have continued to see God move.

Lee, who also serves as the chaplain for the football team, has ministered to players and coaches who lost loved ones during the 2021 season. Recently, the Grambling State BCM partnered with Ruston evangelist Luke Hockenjos to distribute 150 leather-bound Tony Evans study Bibles to players and coaches.

Additionally, a BCM leadership team of 15 has met weekly for planning and Bible study since the beginning of the school year. Most recently the leadership team helped re-launch a time of weekly prayer called “Prayer on the Yard,” which takes place at the hub of campus. They have invited students and pastors of the community to pray each week for God to continue impacting the campus and area for Him.

“At one point, Prayer on the Yard was common but over the years it kind of fell off,” Lee explained. “Since I arrived at the BCM in early 2020, campus-wide prayer has been a huge focus of mine.

“When we had our first prayer meeting on the yard, you could feel God’s presence,” he continued. “There was so much positive feedback we received from the administration and the student body about how it allowed for people to come with burdens and leave refreshed. To see students, some of whom are called to ministry, lead alongside our local pastors and ministry leaders was amazing. The mission of the GSU BCM is to show and share the love of Christ on the campus and in the community. Our aim is to do this through reaching, connecting, strengthening, and mobilizing our campus for God’s glory. I believe God is going to unify our campus and our community and prayer will be the key to revival at Grambling.”

God has moved mightily since the shooting, Lee said, but he believes the best is yet to come.

“I’m blown away by what God has done,” Lee said. “The past two years of campus ministry have been challenging, but God has been faithful in the midst of that challenging season.

“It’s my hope we go from ministry to movement on campus and that students will grow in their faith,” he continued. “If students know how to share the Gospel, they know how to study God’s word, they understand the importance of being a part of the local church, and they have developed the heart posture of living on mission, I have done my job.”

By Steve Horn, Louisiana Baptists executive director Jesus reminds us that we should always pray and never give up (Luke 18:1). Today’s ruling from the Supreme Court serves as a good reminder of that truth. For almost 50 years, American Christians from various denominational backgrounds have been praying and … END_OF_DOCUMENT_TOKEN_TO_BE_REPLACED