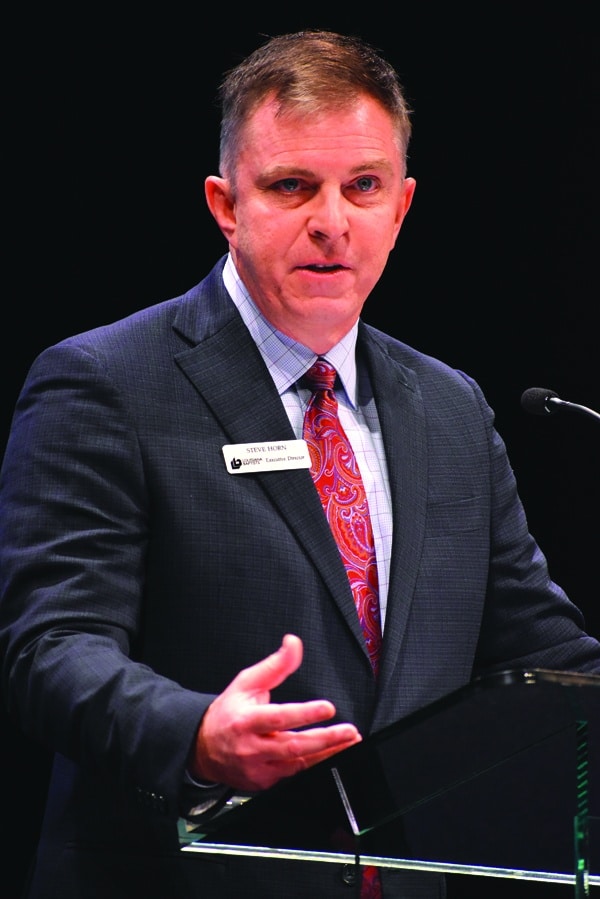 Louisiana Baptist Executive Director Steve Horn encouraged Louisiana Baptists to participate in Crossover, a large-scale evangelistic effort held before the SBC Annual Meeting, and the North American Mission Board SERVE Tour, an effort that seeks to involve participants in service projects as the foundation for evangelism the weekend before the SBC Annual Meeting. Philip Timothy photo

Speaking to messengers to the 2022 LBC Annual Meeting, Nov. 15, held in the Calvary Baptist Church, Alexandria, Horn explained that the SBC gathering was originally scheduled to take place in Greensboro, North Carolina. However, the SBC Executive Committee, in April, voted to change the location to New Orleans, which has the meeting space to accommodate the large crowd that now is expected.

“By the providential hand of God, the annual meeting of Southern Baptists has been adjusted to come to our state in 2023,” Horn said. “I don’t believe anything is by accident. Let’s believe that the reason that the SBC annual meeting has been moved to New Orleans is to have maximum Gospel impact in New Orleans and the entire region surrounding New Orleans.”

Horn encouraged Louisiana Baptists to participate in Crossover, a large-scale evangelistic effort held before the SBC Annual Meeting, and the North American Mission Board SERVE Tour, an effort that seeks to involve participants in service projects as the foundation for evangelism the weekend before the SBC Annual Meeting. LBC staff will help coordinate sign up for both initiatives, he said, and he hopes to have a team from each association to participate in Crossover and SERVE.

Horn said he is praying for 2,023 people to be saved through these evangelistic efforts.

“We know that the harvest is ripe for abundance in New Orleans,” he said. “And, now we can say that the workers in that harvest are going to be more than usual at least for this abbreviated time. We cannot miss this strategic opportunity.”

He said LBC staff members, in January, were trained by Ministry Safe, a national ministry that equips churches and ministry programs to better protect children from sexual abuse, with particular emphasis on recognizing signs that abusers are “grooming” victims. All staff will continue participating in regular online training through Ministry Safe to stay current.

Additionally, he said dialogue already has begun about how the issue of sexual abuse changes the way ministry will be conducted by the Tall Timbers Baptist Conference Center, Baptist Collegiate Ministry and Disaster Relief.

— The LBC Executive Board Administrative Committee adopted a change to the LBC personnel manual prior, regarding the chain of command for reporting abuse within the staff (Instead of any report stopping with Horn, employees will be advised that they can report to the Executive Board president).

— Language has been added to the LBC Personnel Handbook about what steps to take regarding any allegations of reports of abuse.

— A LBC Sexual Abuse Response Council has been formed and is working to help guide work in sexual abuse awareness and reform. The council members are made up of one member from each of the Louisiana Baptist State Mission Service teams to prepare and maintain resources for Louisiana Baptist churches regarding best practices on how to prevent sexual abuse and to care for survivors in the event of sexual abuse.

“Let us be known as a people who are always willing to do the next right thing,” Horn said.

Horn said Louisiana Baptists have much to celebrate in 2022:

— Decisions have been recorded through revivals in Lafayette (nearly 100) and Livingston Parish (more than 500).

— The multi-media outreach “Here for You” has seeded God’s truth in 94 percent of TV households across the state; interacted with an average of 187,000 people per month via social media and streaming services; and recorded more than 3,750 decisions for Christ through a partnership with the Billy Graham Evangelistic Association.

— More than 700 students made a decision for Christ and 5,500 students were trained in sharing their faith during the 2021 Youth Evangelism Celebration; and 15 decisions, collectively, were documented during the Missions Jamboree and children’s missions camps.

— Eighteen new churches were planted in 2022.

“Glory to God,” Horn said. “When our president asks us if there is anything worthy of praise to dwell on, my answer is a resounding, yes. Yes indeed.”

By JT Waresak I'm not a huge New Year's resolution guy. However, as a new year begins, it is another opportunity to raise the bar in my effort to be the best dad I can be. I'm also reminded that the opportune time to pour into my sons and daughters is limited to a couple of precious decades. This is not to say … END_OF_DOCUMENT_TOKEN_TO_BE_REPLACED