Members of the Louisiana Executive Board spend a moment in prayer before the start of the spring meeting at Tall Timbers Baptist Resort on May 3. 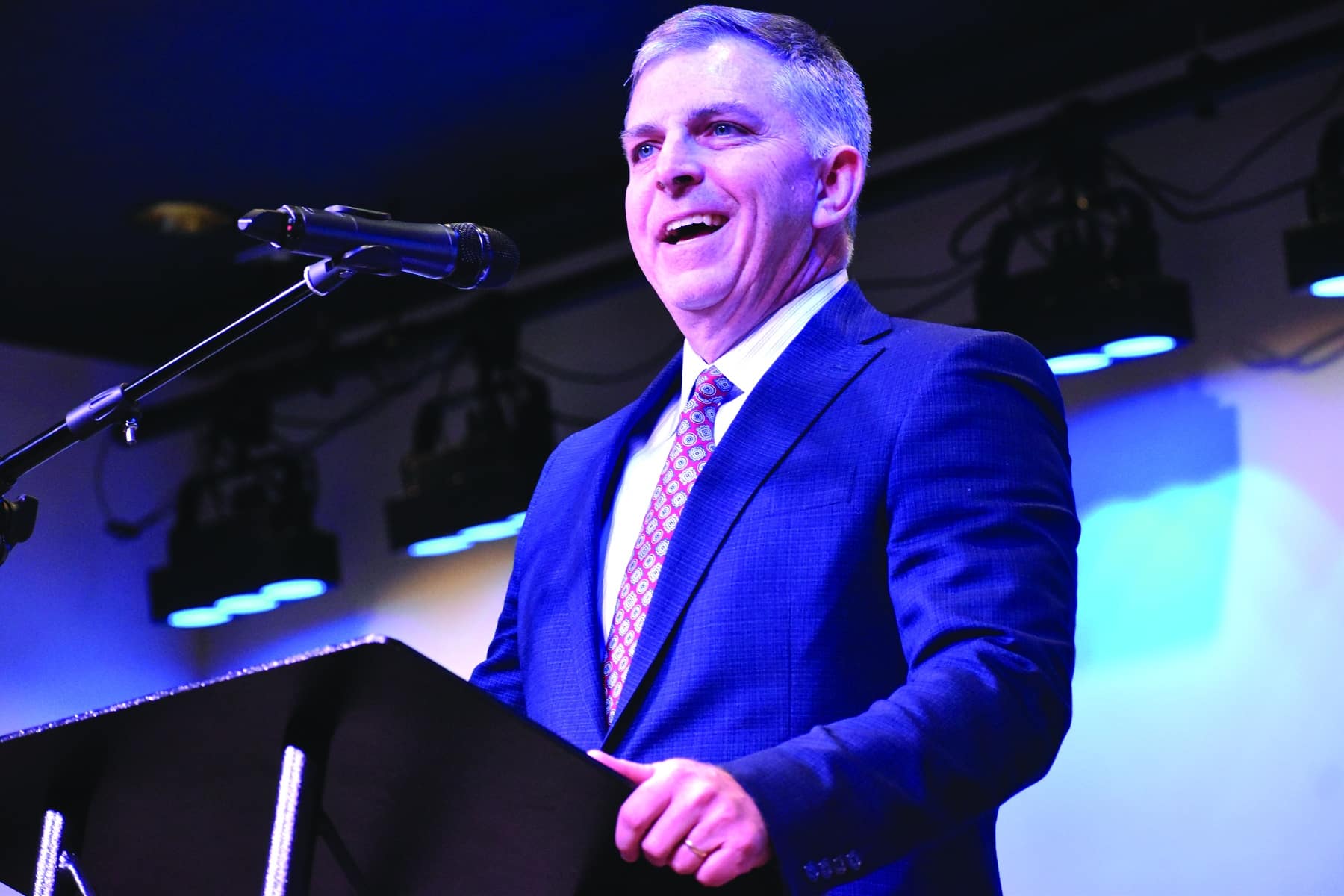 “With 1,600 churches theoretically having multiple ways to split their cooperative pie, we would need to expand our accounting team, forcing us to shrink our missions and ministry teams,” Horn said during the LBC Executive Board meeting, May 3, at Tall Timbers Baptist Conference Center, Woodworth. “I don’t want to do that.

“I will not lead us to do that,” Horn said. “And I don’t think Louisiana Baptists, if faced with that reality, would want us to do that. I may very well be told that is what we are going to do, but until then I’m not going to lead us in that direction.”

But, he said, a growing number of Louisiana Baptist churches have asked for their gifts through the Cooperative Program to be used exclusively for Louisiana Baptist missions and ministries, thus withholding funds from Southern Baptist Convention causes; and such requests are being honored.

The SBC Ethics & Religious Liberty Commission’s former president had been a source of past controversy (for blasting conservative voters while seeming to give a pass to liberal politicians). Alleged “wokeness” among some SBC leaders also has raised concerns. Most recently, the SBC Executive Committee hired a pro-LGBT law firm, prompting additional worries about giving funds to national ministries.

The Missouri Baptist Convention Executive Board is the latest state convention to authorize “Plan B” that allows churches to withhold funds from selected SBC entities without withdrawing from CP support altogether, according to the Missouri Baptist Convention’s newspaper, the Pathway. Churches in Missouri still can participate in “Plan A,” which is the MBC’s traditional form of CP giving through which churches send undesignated gifts to the SBC Executive Committee for distribution according to the allocation plan approved each year by Southern Baptist messengers at the SBC annual meeting.

The Georgia Baptist Mission Board allows its churches to exclude up to two CP budget lines, the Pathway added.

The Baptist Press, a division of the communications department of the SBC Executive Committee and the official media outlet for SBC national entities, noted, too, that “North Carolina, Wyoming and Oklahoma periodically forward church gifts to the [SBC] EC with some type of designation or restriction.”

“I want Louisiana Baptists to know that today I am fundamentally opposed to these plans,” he said.

“Indeed, churches are autonomous, and they can do whatever they want to do. As my predecessor at First Baptist, Lafayette (Perry Sanders) used to say, ‘Baptists are a people who believe ‘ain’t nobody going to tell us what to do but Jesus.’”

However, Horn urged churches not to give up on cooperation with other state Baptists, explaining that withholding money from SBC causes hurts the cooperative spirit that has long defined the fellowship among state Baptist groups. Furthermore, he asked board members to remain unified and to lead Louisiana Baptists in unity.

“I believe what is needed as it relates to these challenges is prayer and wisdom,” he continued. “We need to pray for God’s direction and protection. Our enemy, the devil, is the author of confusion and would love to divide us. Let’s don’t provide ammunition for him to use against us. We also need to pray for wisdom for those preparing the recommendations and reports.”

Horn shared specifically about the SBC Executive Committee’s hiring of the Bradley law firm, which has been a sponsor of the gay pride parade in Nashville, Tennessee, where the firm is based.

“From every conversation that I have had with SBC leadership, they recognize this error, agree that it was an error, and are actively working to hire a new interim law firm to serve the Executive Committee until a permanent CEO/president is hired,” Horn said. “Now is the time to wait for this change to be made instead of throwing away a plan of cooperation that has served Southern Baptists well for almost 100 years and that was masterminded by a Louisiana pastor (M.E. Dodd).”

Since Louisiana Baptist state mission services staff on May 5, 2021, began ‘Change Me’ to focus on personal revival, more than 12,500 books have been given away or purchased, he said. The 28-day revival guide is based on Psalm 139:23-24.

“Let us continue to pray that we allow God to ‘search us, know us, and test us to see if there is any wicked way in us,’” Horn said.

Horn highlighted several efforts by Louisiana Baptists to win the lost to Christ:

–The ‘Here for You’ media campaign in the first quarter of 2022 reached 92 percent of TV households across the state, social media touched an average of 120,470 people per month and 51,792 people were impacted through streaming services. Moreover, in partnership with the Billy Graham Evangelistic Association there were 1,578 views of the Gospel presentation in the first quarter and 292 people indicated having made a decision for Christ;

–Louisiana Baptist Disaster Relief teams in cooperative efforts with three other states (Kentucky, Mississippi and Ohio) are traveling monthly to Gdańsk, Poland, to minister to Ukrainian refugees for at least six months. The Louisiana team, which went on April 13-18, remodeled an apartment that soon will house 16 Ukrainian refugees, led a Bible class for the children of the refugees and showed “The Jesus Film” to around 40 Ukrainians and a handful of members at First Baptist Church, Gdansk (the host church); and

— Louisiana Baptist, Texas Baptist Men and South Carolina Disaster Relief teams recently completed a pilot project involving a two-week rebuild of 20 homes, two churches and the Bayou Associational office in the Houma/Gray area. Louisiana Baptists have ample experience responding to disasters with feeding and cleanup efforts for communities, but typically have limited their rebuilding efforts to the restoration of church facilities and pastor’s homes. The added ministry focus will assist homeowners throughout communities, and DR officials are hoping the Rebuild Program will help give residents more opportunities to find hope in Jesus Christ. Additional teams are scheduled this summer to continue the rebuild project in the area impacted by Hurricane Ida.

Horn asked for continued prayer for the work of the Sexual Abuse Task Force. He said the staff, in January, were trained by Ministry Safe, a national ministry that equips churches and ministry programs to better protect children from sexual abuse, with particular emphasis on recognizing signs abusers are “grooming” victims.

Other related measures include:

–Continued discussions by administrative staff on how the LBC is responding to sexual abuse prevention.

–Reevaluating use of space at Tall Timbers for camps and retreats. Rules have been modified regarding registration in Lee Lodge, and we anticipate even more changes in the future.

–Horn and Reggie Bridges attended a meeting in Nashville on April 4 for an update from the Sexual Abuse Task Force.