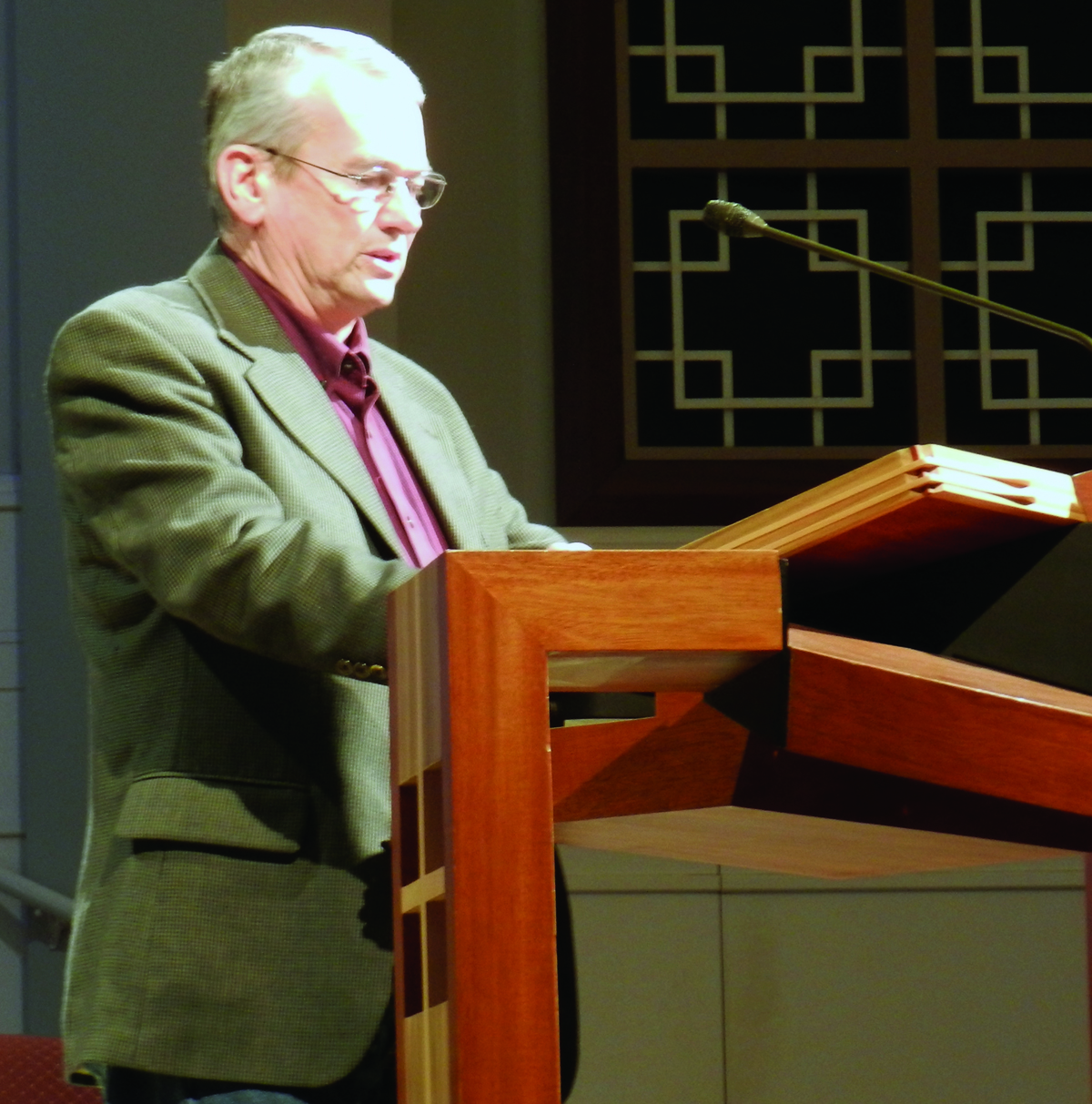 By John Marcase, Special to the Message

PINEVILLE – Charles Hott had it all.

He was a highly successful businessman in Texas in the 1970s and early 80s as the co-owner of a string of enormously profitable gay bars in Dallas, Houston, Arlington and El Paso.

He and his business partner, a member of the mob, paid for political influence, from the local police all the way to the White House. Democrat, Republican, it didn’t matter. Pols on both sides of the aisle willingly accepted the “donations.”

He had become what he had desired – Robert Duvall’s character in “The Godfather,” Tom Hagen.

There was something else Hott had during this time – conflict.

Hott shared his testimony during morning worship at First Baptist in Pineville on Jan. 31 and the following day at the church’s First@First Business Leader Luncheon. Stewart Holloway, pastor of First Pineville, had been Hott’s pastor and accountability partner at Holloway’s previous church in Forestburg, Texas.

“I’ve wanted to see this happen for 13 years,” Holloway told his congregation. “Charley has a story full of mercy and grace, and I want as many people as possible to hear it.”

Hott’s testimony at Pineville was just the third time he has shared it.

“I’m here today because I’m not ashamed of the Gospel. I’m here only as an example of God’s mercy,” Hott began.

He told of growing up in a Christian home in the Dallas metroplex. In fact, he was baptized as a child at Eastside Baptist Church in Arlington. As he noted, “it was that teaching of the Bible at an early age that would help me.”

As he reached puberty, he noticed he was attracted to males more than females. The first week of his senior year in high school, he had his first sexual encounter with a man. Telling his mother he was a homosexual was difficult, he admitted. Her response was simple, “Do you know what the Bible says about homosexuality?”

“I did, and I was conflicted,” said Hott.

Still, he began his career in the gay bar business. Hott and his business partner survived arson attempts, death threats and vandalism, as well as extortion attempts. Still, their business flourished as their gay bars were among the highest grossing bars in Texas.

Still, Hott said, he could feel the Lord working inside him and protecting him. He called them “warning signs.”

He asked one sexual partner, “What if what we’re doing is wrong?” The response from the partner was, “I don’t care.” A year later, in September 1978, that partner was on Pacific Southwest Airlines Flight 182 when it collided with a Cessna over San Diego. Everyone on board PSA Flight 182 died. Hott said his partner’s remains were never identified due to the fire.

Another business associate’s bullet-ridden body was found in Las Vegas. Hott faced tax evasion accusations, and he even survived a serious head injury from a motorcycle accident.

“It would take more than that for me to repent,” Hott noted.

Fire Island, part of the barrier islands located south of Long Island, was a famous meeting place for gays except for Hott that weekend.

“I could not find one guy who was attracted to me that weekend at Fire Island,” he said.

Hott said many of those at Fire Island, perhaps numbering in the hundreds, died later in the summer due to a new disease called AIDS.

“I had divine protection,” said Hott. “I had wealth and power, but no personal relationship with God.”

This would soon change.

His business partner found a buyer for their clubs, and Hott began attending services at First Dallas in the summer of 1982, writing $5,000 checks for the offerings, hoping it would attract attention. When it didn’t, he called and got an appointment to visit with Dallas’ legendary pastor, W.A. Criswell.

Hott shared his story and his desire to join the congregation, knowing his decision would draw widespread media attention and scrutiny.

He told Criswell he would need help and support, and if he could find it at FBC Dallas.

“Lad, you’ve come to the right place,” Criswell told Hott. He went on to share that Criswell told him he didn’t know much about what he was going through, but he knew what would be critical.

“The key for success will be submission, and submission was the key,” Hott said.

Even after the original deal to sell the nightclubs fell through, Hott’s business partner bought him out. Though it was for a fraction of what the business was worth, “I was free,” Hott said.

“No one chooses what they are tempted by.”

He re-dedicated his life to Christ and was re-baptized, confident of his decision and new life.

“To current homosexuals, you have a choice by how you live – temporal pleasures or God’s peace,” he said. “Cry out to God for the right choice.”

Hott went on to caution churches against ostracizing gays and homosexuals.

“Don’t be hypocritical by blaming all of society’s sins on gays,” he said, noting the sanctity of marriage had been eroded long before last year’s Supreme Court decision legalizing same-sex marriages.

“The divorce rate between Christians and non-Christians is the same,” said Hott.

Further, he said finding solutions to societal ills will not come from politicians, who he says will tell you whatever you want to hear.

The solutions come from one and only one source.

“In 1971, Section 21.06 of the Texas Penal Code describes homosexual acts as a crime,” Hott said. “Man’s law did not prevent me from having gay sex or opening gay bars. It was God’s law, taught by good preaching and teaching, that intervened in my life.

“The solution starts and ends in the church.”

Any tool can be misused. A hammer can construct or kill. An electrical wire can give instant light or, if mishandled, bring sudden death. … END_OF_DOCUMENT_TOKEN_TO_BE_REPLACED