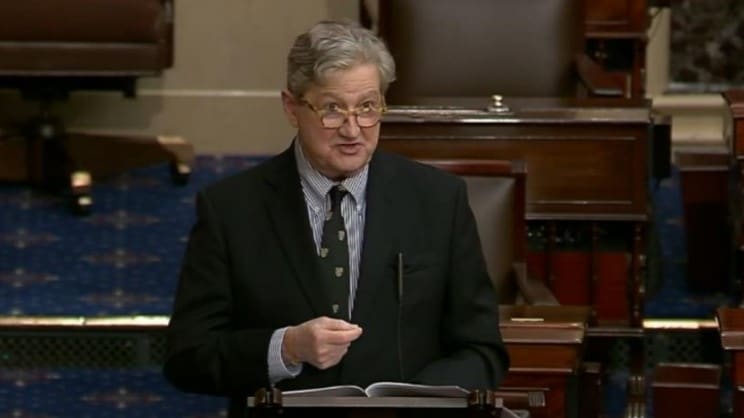 U.S. Sen. John Kennedy urges FEMA to be transparent in how they raise the price of flood insurance for Louisianans. Screenshot

WASHINGTON – Sen. John Kennedy (R-La.), on the Senate Floor, urged the Federal Emergency Management Agency to explain how it is implementing its new pricing algorithm for calculating flood insurance premiums, known as Risk Rating 2.0. FEMA’s new algorithm has sent the rates of many National Flood Insurance Program policyholders in Louisiana skyrocketing. Despite repeated questions from Kennedy, FEMA has yet to clarify how it determines new rates.

“It doesn’t do any good to offer flood insurance if people can’t afford it, and that’s what FEMA’s doing right now,” said Kennedy. “We, in Louisiana, have the highest participation rate in the country, bar none. And despite what some people may think, my people who are buying flood insurance, they’re not multimillionaires. They’re working people.

“There is no transparency with Risk Rating 2.0,” he continued. “People have absolutely no idea— members of the United States Congress have no idea—how this algorithm works and how they come up with a specific price for every home in America. But I’ll tell you what we do know: All the prices have gone up. “A lot of those levees in Louisiana are paid for by Louisiana citizens. We have asked, ‘How does this algorithm, in raising these prices, take into effect or take into account the levees? Are we getting credit for our levees?’ And they say, ‘Sure.’ And I say, ‘Can you show me?’ And they say, ‘If I showed you, I’d have to kill you. This is a secret algorithm.’ No transparency, none.”

“FEMA says it’s going to make everything fairer. I know this much: It’ll make everything more expensive,” he continued. “According to FEMA’s estimates, 80 percent of the people who have flood insurance and have to have flood insurance in Louisiana . . . are going to see their rates go up. The likely average full-risk premium for a home in Louisiana under this new secret sauce is $1,700. Under the old system, it was $766. That’s a 122 percent increase because of this algorithm, the secret sauce, which FEMA will not let us see.

“My people can’t afford this, Mr. President, and the reality is people are already dropping flood insurance,” he said. “In eight of my parishes or counties, the number of policies has dropped from 290,000 in October of ‘21 to 267,000 in November of ‘22. So that’s 22,000 people—almost 23,000 people—out of only eight parishes or counties who’ve had to give up their flood insurance.”

Speaking of the Flood Insurance Pricing Transparency Act, which he has cosponsored, Kennedy said, “It’s a bipartisan bill. All we’re asking that FEMA do is talk to us and tell us how they’re coming up with these rate increases. The American people pay the salary of the people of FEMA, and my people . . . deserve to know how their policies are being priced.”

By JT Waresak I'm not a huge New Year's resolution guy. However, as a new year begins, it is another opportunity to raise the bar in my effort to be the best dad I can be. I'm also reminded that the opportune time to pour into my sons and daughters is limited to a couple of precious decades. This is not to say … END_OF_DOCUMENT_TOKEN_TO_BE_REPLACED