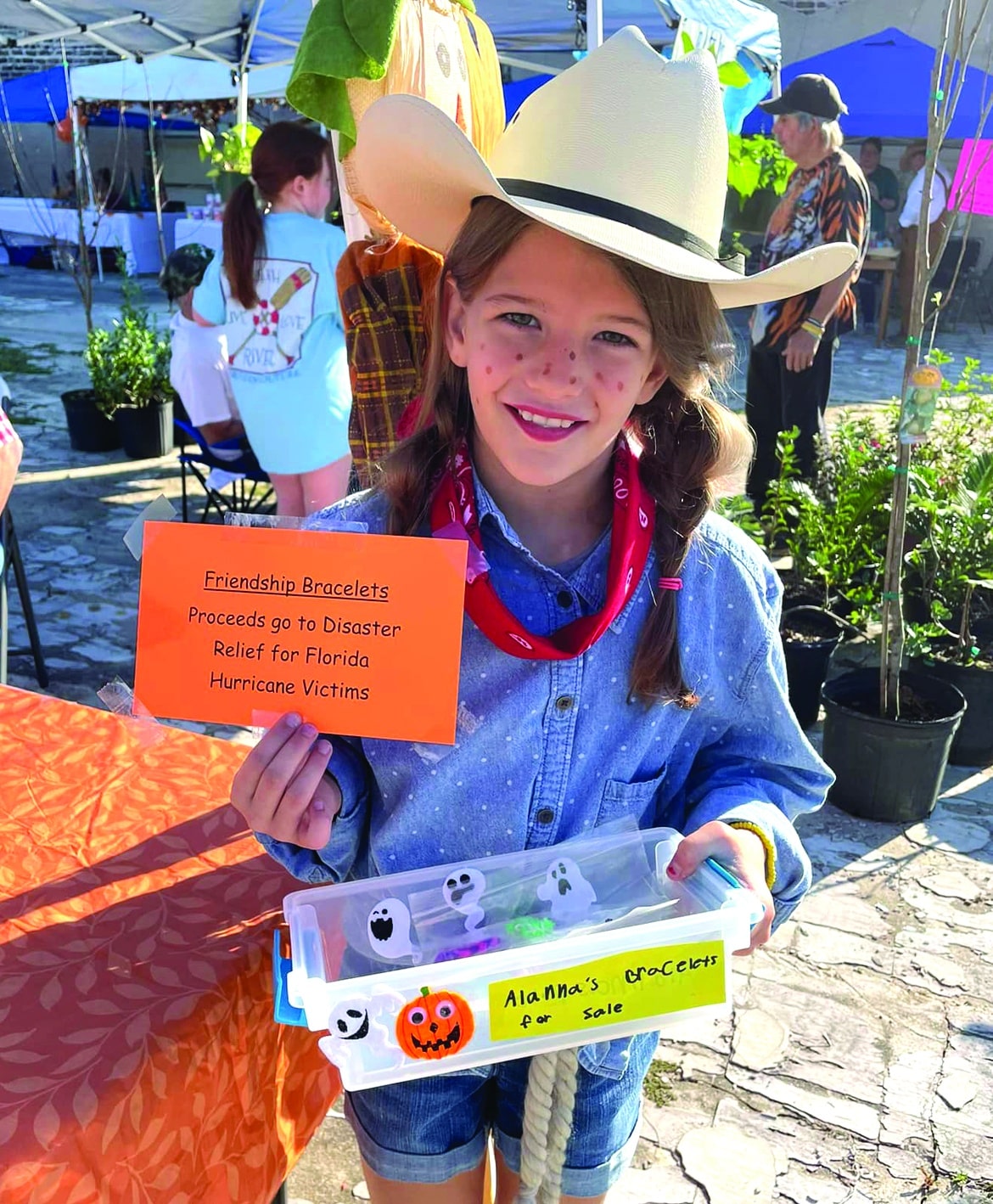 Alanna Chadwick, 9, donated to disaster relief the $75 she earned from her home-made bracelets raised, Oct. 15, at a farmer’s market in Kentwood. A week later, she accepted Christ during a revival service at Old Zion Hill Baptist Church, Independence. Submitted photo

KENTWOOD, La. (LBM) – Alanna Chadwick’s heart was so moved to help those impacted by Hurricane Ian that the 9-year-old girl donated money earned from her home-made bracelets raised, Oct. 15, at a farmer’s market in Kentwood.

Chadwick said she hopes the $75 will bless others impacted by the hurricane that devastated parts of Florida, Sept. 28.

“It was pretty amazing how all these people care about disaster relief and I wanted to help out,” Chadwick told the Baptist Message. “I hope this lets them know that Jesus loves them and can save them.”

Chadwick was introduced to disaster relief in 2018 when her family attended First Baptist Church, Springfield, where former Louisiana Baptist Disaster Relief Strategist Gibbie McMillan was interim pastor. Her interest in this special ministry subsequently grew until, in early October, she asked her grandparents, Alan and Kim Chadwick, if she could make bracelets to sell at their booth during the farmer’s market.

They agreed and the youngster began to craft bracelets. Kim Chadwick said she was touched by her granddaughter’s selfless act of helping others in need.

“I have always tried to teach her about missions and the Lord blessed her that day,” Chadwick said. “She may not be missionary now as far as going to another country, but she is doing missions by raising money to help others share Christ.”

Once they returned from the market, Chadwick began asking questions about Jesus Christ and four days later, while attending a revival service at Old Zion Hill Baptist Church, Independence, Chadwick gave her life to Christ.

She was baptized with her brother, Cole (who gave his heart to Christ at a Disciple Now event earlier this year), and 15 others, Nov. 6, during a service at Old Zion Hill Baptist.

Since Oct. 17, 730 individuals have surrendered their lives to Christ during revival services that have been extended five times and a tent crusade. Louisiana Baptist DR Strategist Stan Statham said Chadwick’s donation is a reminder of how everyone can play a part in helping share Christ love with others in need.

“This little girl raised money to help somebody she doesn’t even know,” Statham said. “Every gift is significant and if you are obedient, God will use you. In this case, it’s not even the amount of the gift that mattered. It’s just touching a little girl was moved by the Lord to make a difference. In our culture today you don’t see a lot of that.”

By JT Waresak I'm not a huge New Year's resolution guy. However, as a new year begins, it is another opportunity to raise the bar in my effort to be the best dad I can be. I'm also reminded that the opportune time to pour into my sons and daughters is limited to a couple of precious decades. This is not to say … END_OF_DOCUMENT_TOKEN_TO_BE_REPLACED