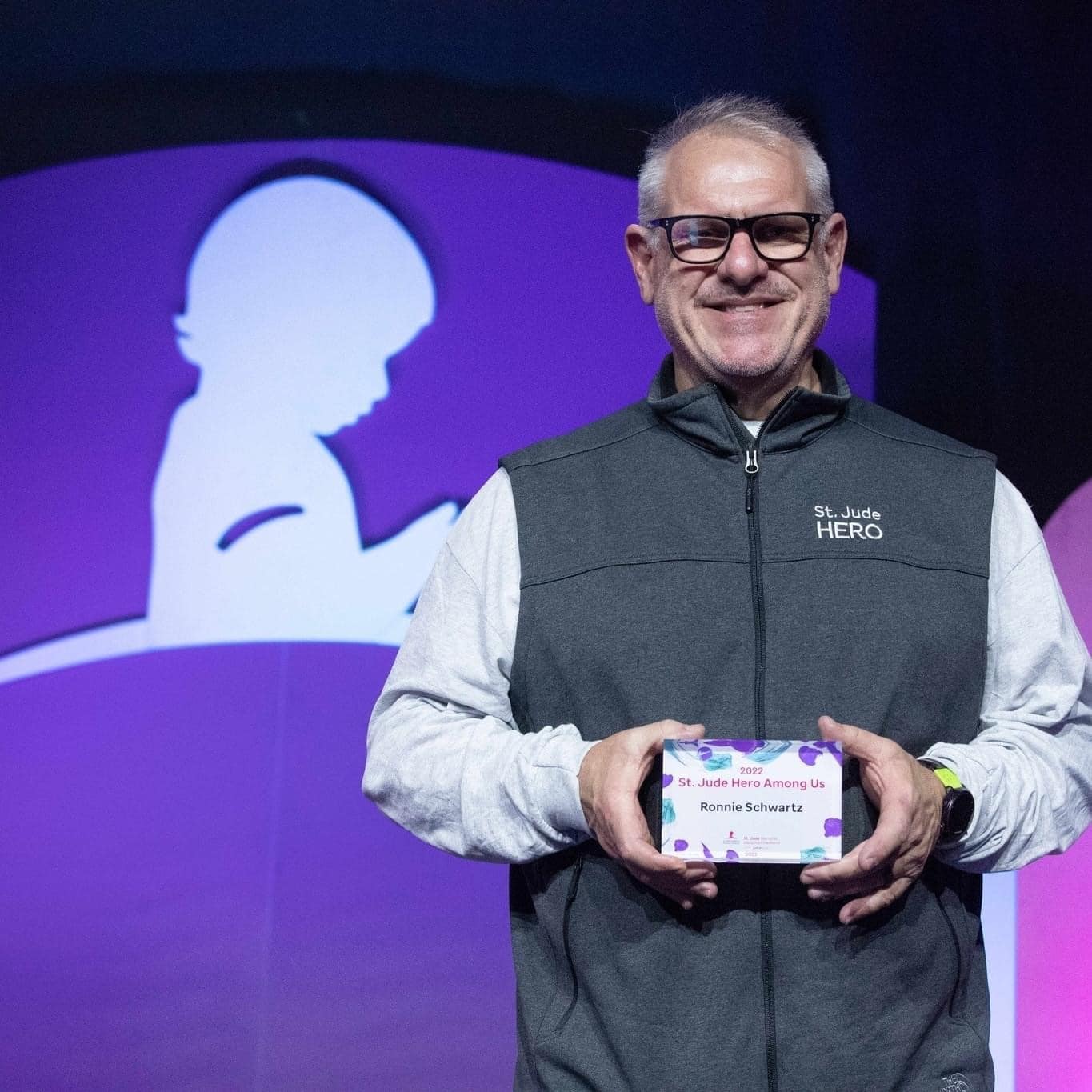 Ronnie Schwartz proudly displays the 'Hero Among Us' award he was given during the recent St. Jude Children's Research Hospital Memphis Marathon weekend. Submitted photo

Schwartz, a local and national ambassador for St. Jude and a member of Calvary Baptist Church, Alexandria, said he has been fundraising for St. Jude for six years and is honored by the recognition.

The award is given each year to a St. Jude Hero who rallies others around them to raise funds for St. Jude Children’s Research Hospital. Since Schwartz became a Hero in 2018, he has personally raised more than $200,000 and helped his team raise over $772,000.

“I’ve been involved with St. Jude for over 12 years,” said Schwartz said. “I put together a team called CenLa Runners Heroes during the last six years and applied for nonprofit status for our team. We all have people we know from Central Louisiana that are patients of St. Jude. We raised over $177,000 this year.”

Schwartz and CenLa Runners Heroes have been celebrated for many years as one of the top fundraising teams and top individual fundraisers in the country for the St. Jude Memphis Marathon.

“We are honored to have Ronnie running the LCU Louisiana Athletic Clubs, setting such a Christ-like example in our community, on our campus and for families across the nation in a time of great need,” said LCU President Rick Brewer. “He truly is a Hero Among Us, and we admire him for his passion and dedication to the mission of St. Jude.”

St. Jude is a Memphis-based specialty research hospital for children that focuses on providing exceptional care to patients with pediatric cancer and other catastrophic diseases. According to its website, the treatments for pediatric cancer can last up to three years or more and cost on average $425,000, not including housing, travel and food but the individual cost of care can vary greatly. No family ever receives a bill from St. Jude for care, and no family is asked to pay co-pays or deductibles.

By JT Waresak I'm not a huge New Year's resolution guy. However, as a new year begins, it is another opportunity to raise the bar in my effort to be the best dad I can be. I'm also reminded that the opportune time to pour into my sons and daughters is limited to a couple of precious decades. This is not to say … END_OF_DOCUMENT_TOKEN_TO_BE_REPLACED