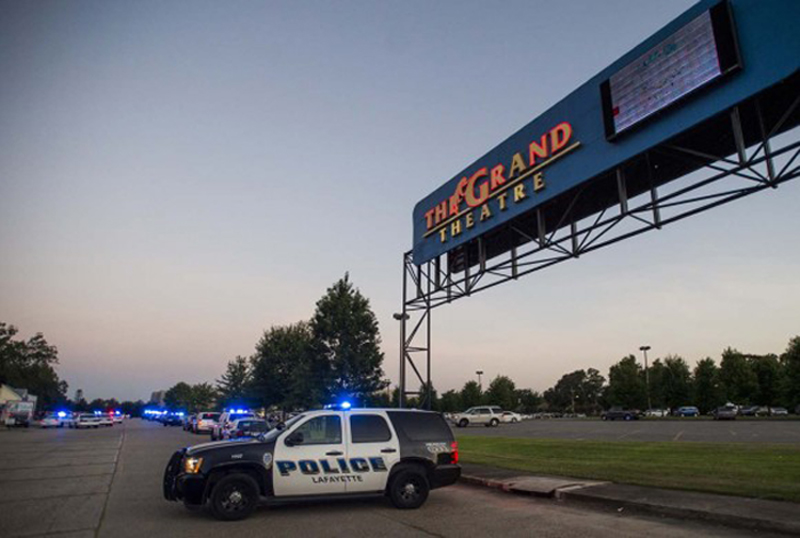 A Lafayette police car is parked at the Grand Theater, the scene of a deadly shooting Thursday night. Photo courtesy of KLFY.

LAFAYETTE – Louisiana Baptist pastors in Lafayette are urging prayers after a deadly shooting in a movie theatre happened in their hometown late Thursday evening.

Around 7:30 pm Thursday during a showing of the movie “Trainwreck”, 59-year-old John Russel Houser of Phenix City, Ala., the alleged shooter, was sitting alone when he got up from his seat at the Grand Theatre off Johnston Street and opened fire with a semi-automatic handgun according to Lafayette Police Chief Jim Craft.

Two people sitting in front of him were killed, one at the theater and another later at an area hospital, according to KLFY-TV in Lafayette. Authorities identified the victims as 21-year-old Mayci Breaux and 33-year-old Jillian Johnson.

Nine others were transported to three area hospitals for treatment. Since the shooting, two of the wounded have been released. The rest remain hospitalized, including one with critical injuries.

Col. Michael Edmonson of the Louisiana State Police said, Houser was “a drifter who just happened to be in this theater and just took two beautiful lives,”

Craft said Houser had parked his car near the theater’s exit door and was intent on escaping. Houser did attempt to flee but was trapped by the quick law enforcement response. He ultimately took his own life.

Authorities have not determined a motive for the shootings. Investigators searched Houser’s motel room where they located wigs and other disguises, possibly to aid in his escape.

Steve Horn, pastor of First Baptist Lafayette and president of the Louisiana Baptist Convention, said after every mass shooting he always has thought that this could have happened in his town. Now, Horn said, his thought has become reality.

“It is my town,” Horn said. “Tragedy has come to Lafayette, Louisiana — the happiest town in America.”

Horn said this tragedy reminds him Lafayette is not immune and just as Jesus said in Luke 18:1 that prayer is needed and to not become discouraged.

He added that in the coming days powerful stories of God’s grace and others’ heroism and service will unfold.

“We should pray,” he said. “Tragedy always opens doors for conversations about Jesus, because none of us are promised tomorrow. So, may we be ready and faithful.”

“Trust Him,” he said. “Tragedy reminds us of what is really important in this life. Don’t forget it.”

Louisiana Gov. Bobby Jindal rushed to Lafayette upon hearing the news and arrived at the scene around 9:30 p.m. After getting briefed, he went to Lafayette General Hospital where most of the victims had been transported to visit with them and their families. He called for prayers Thursday evening during a late-night press conference.

According to a video shot by KATC-TV in Lafayette, Jindal said “one of the teachers jumped on top of the second teacher in an act of braveness.”

“Both teachers got shot but the second one, the one who got saved, even though she got shot she had the presence of mind to pull the fire alarm and save other lives,” he said.

The teachers, both of whom are at Jeanerette Senior High School in Iberia Parish, are Jena Meaux and Ali Martin.

Martin, who is an English teacher and has taught for seven years, was shot in the knee. She was released from the hospital Thursday night. Meaux, who has been a teacher for 21 years and is the librarian at the school, remained hospitalized as of Friday morning, but is expected to be released soon.

Aaron Shamp, lead pastor of Redeemer City Church in downtown Lafayette, lives 100 yards from the theater.  Shortly after the shooting occurred, Shamp gathered with others to pray.

“One was a father waiting to hear from his son who was in the theater,” Shamp recalled. “He got word from his son an hour or so later. He came and told me and asked about our church. We talked to a few witnesses as well who told us thanks for the prayers.”

In an issued statement, U.S. Rep. Charles Boustany, R-Lafayette, said, “I’m saddened at the terrible loss of life represented in tonight’s tragic shooting at a movie theater in my hometown of Lafayette. Bridget and I are praying for the families and friends of the victims at this difficult time. I will work with the Lafayette Police Department, local, state and federal officials to get to the bottom of what happened tonight.”

Mike Walker, pastor of the Bayou Church in Lafayette, called the shooting a surreal event. Not only does his son live a quarter of a mile from the theater but one of his church members was the second police officer to arrive on the scene.

“We’ve seen people of faith reach out and step up to be with our hurting community,” Walker said. “Dismay and fear are being confronted with prayers, love and peace.

“Our police teams modeled courage, skill, promptness and precision,” he continued. “As crowds were rushing out our first responders were rushing in. They displayed total professionalism. Our community can be so grateful for them.”