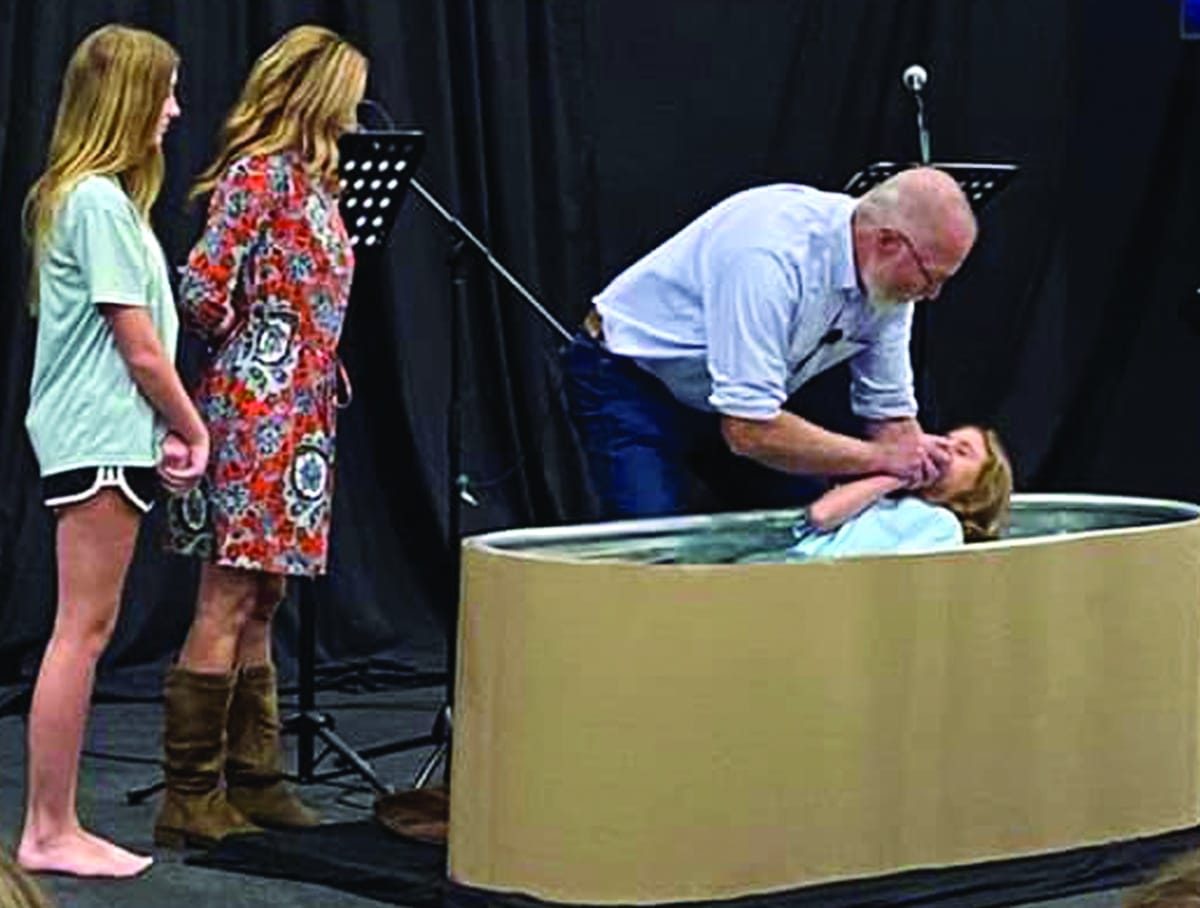 Natalie and Sarah Cowell shared a sweet sister moment, Oct. 31, when they became the first members of SweetWater Church, Abita Springs, to stir the baptistery waters.

As the two sisters stepped into a horse trough at the Abita Springs Recreational Center to symbolize their new life in Christ, their mother, Amiee Cowell, was moved to tears because the baptisms signified a spiritual rebirth for the entire family.

“My husband had passed away from cancer in 2019 and I was so angry at God I stopped going to church,” Cowell told the Baptist Message. “When Pastor Ken (Schroeder) told me he was planting the church, I knew it was time for us to get back into church and for my daughters to finally take that next step of baptism several years after they had accepted Christ. My girls are so close and do everything together, so sharing this moment is something they will remember forever.”

Schroeder, who in 2019 was transitional pastor at Ebenezer Baptist Church in Hammond, remained there until they called a pastor in February.

With a core group of eight people, SweetWater Church began meeting weekly, Sunday evenings, for Bible study in Schroeder’s home, and on Easter drew 46 for their first preview service at the Abita Springs Recreational Center.

They continued meeting for weekly Bible studies and a monthly preview service until the church plant gathered Sept. 12 for a “grand opening” service.

“We give all the glory to God,” Schroeder said. “We don’t do it. He does it. We are looking forward to what the Lord has planned for us.”

Harvest Church, Treme, celebrated their first baptism during the initial service as a congregation, Sept. 26.

Pastor Andrew Hanna said the baptisms were a re[1]minder of God’s faithfulness to the church plant, which since January had met in his home for monthly community interest meetings until they moved into Phillips Wheatley Community School in June for a monthly public gathering.

“It was a special and sweet moment,” Hanna said. “There were a lot of people who walked with us along this journey, and they were there the day we had our first service. That day was an answer to a lot of prayers.”

Even before they met for the first service, the church was involved in community outreach: Wheatley Community School, Treme, helped identify families who needed assistance with school supply purchases and clean up from Hurricane Ida, which made landfall in August.

Since the launch, members have continued outreach through a candy distribution at a Halloween event at Lafitte Greenway Park. The church also has mentored students at Wheatley Community School each week and hosted a basketball clinic at the school that was led by Hanna, who is a physical education teacher there.

“My heart for our church is we would be a faithful presence in the neighborhood to proclaim the Gospel and serve our neighbors,” he said. “That kind of witness will pay off in the long run. Ministry isn’t a sprint. It’s a marathon. We want to cultivate a place of community where people live as if the Gospel were true.

“We are seeing things already happening and how we can join in to help,” he continued. “We are limited in resources and manpower but not the heart.”

By Will Hall, Baptist Message executive editor ALEXANDRIA, La. (LBM) —“Nobody cares what’s happening to the Uyghurs, okay? You bring it up because you really care, and I think that’s nice that you care. The rest of us don’t care.” This appalling statement was made by Silicon Valley billionaire Chamath … END_OF_DOCUMENT_TOKEN_TO_BE_REPLACED