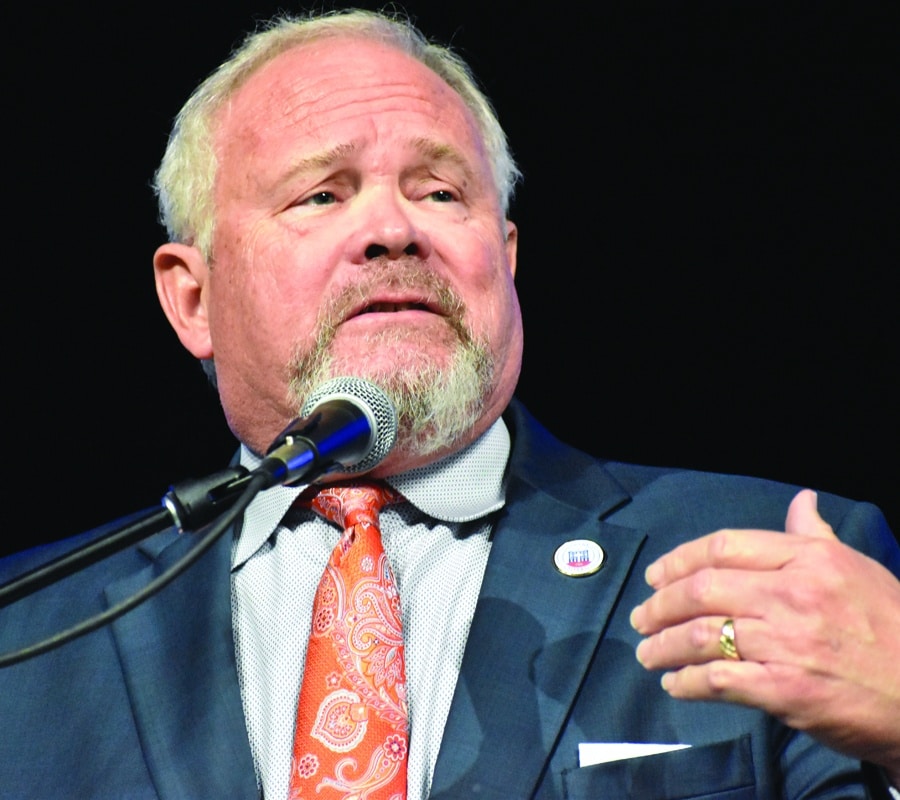 Louisiana Christian University President Rick Brewer shared that 47 students have come to faith in Christ since the start of the fall semester. Brian Blackwell photo

In his report, President Rick Brewer celebrated the board of trustees’ unanimous vote, Oct. 25, to change the school’s name to Louisiana Chris[1]tian University. He said it will strengthen the educational institution’s reputation and further advance the Kingdom of God.

He said the university remains committed to preparing graduates and transforming lives, adding that since the start of the fall semester, 47 students have accepted Christ.

Brewer said LCU has launched the Center for LBC entity and special reports offer good news to messengers Calling and Career for students seeking internships, career advice and information about jobs available in their areas of studies. The center also helps students gain an understanding of how their values and spiritual gifts should be assessed to fully know what God is calling them to do in their lives and careers.

“We are preparing students to think Christianly and preparing them for life,” Brewer said. “Transformed people transform environments. Transformed businesses transform industries, transformed organizations transform other lives. And that’s what your school is faithfully doing week in and week out.”

Justin Langford, dean of the College of Missions and Ministries, said LCU’s uncompromised commitment to a biblical worldview is reinforced through its Christ, Church, Culture series, Baptist Collegiate Ministry and chapel services.

“We do recognize there is a very, very difficult task that is set before us as a Christian higher education institution,” Langford said. “But God has equipped us for such a time as this.”

Baptist Message Executive Editor Will Hall said the news outlet’s staff and a team from the Association of State Baptists Papers had been on the ground covering Hurricane Ida through photos, videos and stories that were pushed to other state convention media outlets.

“We made a special effort to emphasize the 31 state Baptist conventions that partnered with us,” Hall said. “We felt it was important to get these reports, these photos, these videos out to them so that they could inform their churches about the importance of what they were doing here, about the difference they were making in our state by partnering with us in disaster relief.”

He added that in 2022 the Baptist Message plans to offer a web-only sub[1]scription for those who prefer a digital format, and he announced that an RSS feed will be available in 2022 that will allow churches to add BaptistMessage.com headlines to their websites to provide dynamic content updated each time the news outlet updates its website.

Hall, who also serves as director of the Office of Public Policy, said his office testified and provided key resources to legislators and committee members on several key pro-life and pro-family bills.

He said the statewide ballot initiative garnered 1,274,167 favorable votes, the most in Louisiana’s history for either a candidate or ballot measure and noted that “because of your leadership other state Baptist conventions are undertaking initiatives like ours to protect common sense pro-life laws in their states with constitutional amendments.”

— Mizell was lauded for championing the Fairness in Women’s Sports Act, which would have prevented biological males from participating on teams designated for women, a bill which enjoyed overwhelming support from lawmakers but was vetoed by the governor, and subsequently missed a needed supermajority by two votes in the House during an historic override session.

— Seabaugh was honored for taking a stand in the face of threatened gun violence and an actual physical attack to push for a simple language change (to prevent equating “dating” to “marriage”) in a bill that offered protections from violence for women and children.

— Johnson was honored for his work behind the scenes to secure $12 million to support foster care and adoption in the state. Hall invited Brian Gunter, pastor, First Baptist Church, Pollock, outreach director, Louisiana Right to Life, and chair, LBC Committee on Moral and Social Concerns, to make the presentation.

Afterward, Gunter used Johnson’s efforts on behalf of foster children to launch his CMSC report, offering that nearly 4,000 children are in Louisiana’s foster care system. He said that the committee had set up an ad hoc panel to work with the state legislature in 2022 to form a foster care and adoption legislative task force to identify ways to improve the system.

“We want those children to be cared for with Christ’s love by Christ’s people,” Gunter said.

He also explained that while multiple pro-life laws have been passed in the state recently, the fight for life is not over, reporting that every day an average of 22 babies lose their lives at abortion clinics in the state.

“We have abortion clinics in Shreveport, New Orleans and Baton Rouge and it is our mission to shut those abortion clinics down once and for all and protect every child in Louisiana by law,” he said. “Thank you so much Louisiana Baptists for your support and let’s fight to take care of our state’s children and to save the lives of the unborn in the days to come.”

Perry Hancock, president and CEO of the Louisiana Baptist Children’s Home and Family Ministries, said more than 3,000 children and others have heard about hope found in Jesus Christ this year through the entity’s various ministries.

Dennis Phelps, director of church and alumni relations, shared in the report that the entity recently restarted the Ministerial Care Residential Program. Louisiana Baptist terminated ministers and International Mission Board missionaries (on stateside assignment, transitioning to a new ministry or recently retired) are eligible to apply for a free apartment on the LBCHFM’s campus in Monroe for up to one year.

“We want to say ‘thank you’ to you for supporting our Louisiana Baptist Convention and your strong support of the Cooperative Program, which allows us to reach out to help encourage and support the children and the families of our pastors and our missionaries in the Southern Baptist Convention,” said Phelps, who also is director of the Ministerial Care Residential Program.

Steed said that in the last year, the foundation helped Louisiana Baptists: establish more than $1.6 million in special gifts for churches and other ministries; earn $1.4 million in income through a short-term fund; and receive returns of $25.1 million in long-term accounts.

By Lane Corley MADISONVILLE, La. - Three years ago, our family was going through one of those down seasons in the ups and downs of life. My mental focus and physical health was declining. I was discouraged and struggling mentally and emotionally. I knew I needed to change a few habits. As part of a recovery … END_OF_DOCUMENT_TOKEN_TO_BE_REPLACED