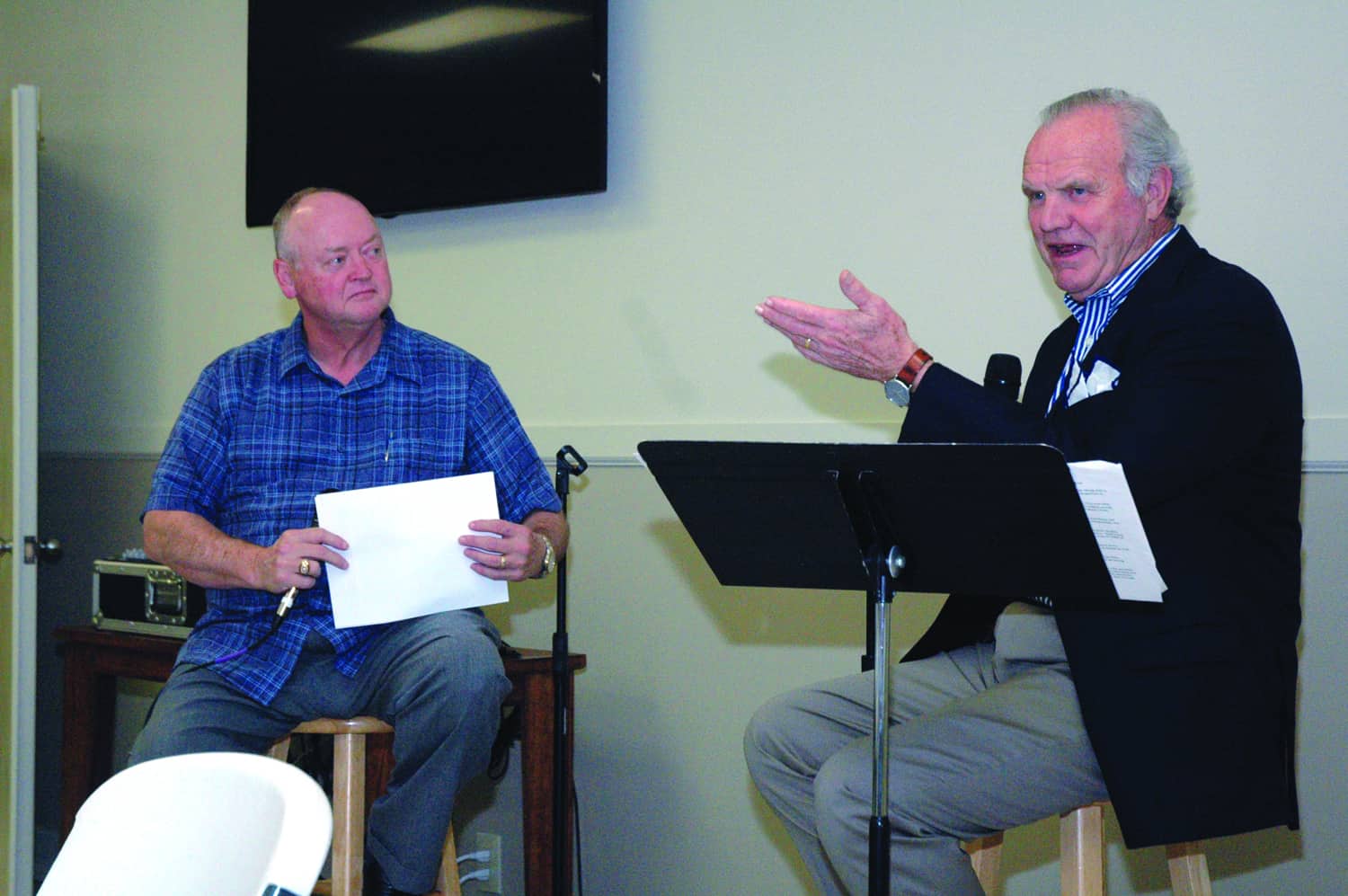 Mike Holloway looks on as SBC presidential candidate Ken Hemphill answers a question during a campaign stop at McClendon Baptist Church in West Monroe. Holloway is among a large number of Louisiana Baptist pastors who have endorsed Hemphill for SBC president. Philip Timothy photo

ALEXANDRIA (LBM) – A growing list of Louisiana Baptist pastors, including the present and a number of former presidents of the Convention, have announced their support of Ken Hemphill as president of the Southern Baptist Convention.

The information found on KenHemphill2018.com includes strong statements extolling Hemphill’s theology as best representing the consensus beliefs of Southern Baptists, and describing his lengthy record of cooperation at all levels in SBC life as most consistent with what SBC leaders should personify.

Some referred to his extensive executive experience with the SBC as the key qualification in these times of turmoil within the Convention.

Steve Horn said Hemphill’s Cooperative Program record “resonates best with me.” Horn is pastor of the First Baptist Church in Lafayette, and served as LBC president from 2014-2015.

“I am excited he is on record as saying, ‘The traditional cooperative means of giving should be the default method of giving, receiving the majority of each church’s mission dollars,” Horn continued. “Mission trips and special initiatives that a church wants to fund should be above and beyond the normal means of supporting our seminaries and mission agencies.”

Philip Robertson, pastor of Philadelphia Baptist Church in Deville and Alexandria, and past LBC president (2004-2005), echoed Horn’s endorsement, saying, “I know the value of having a SBC president with a proven record of championing evangelism, Cooperative Missions, and the salt & light influence of Southern Baptists in our nation and the world.

“In my opinion, Ken Hemphill is that man,” Robertson said, “and I look forward to voting for him in Dallas!”

Several endorsers were direct about their support because of a single quality or issue.

“I support Dr. Hemphill because he values and supports the ministry of state conventions. He stands for the ministry we do every day with the churches of Louisiana,” explained Bill Robertson, Louisiana Baptists’ director of pastoral leadership, who was LBC president in 2006.

David Cranford, pastor of the First Baptist Church in Ponchatoula, declared his support because “Ken Hemphill supports the Cooperative Programs.

Steve James, pastor of Trinity Baptist Church in Lake Charles, and former LBC president, 2002-2003, summed up his support for Hemphill in spiritual terms.

“I have watched him preach, teach and lead with a confidence in the Word of God and a dependency upon the Holy Spirit,” James said. “I have the utmost confidence that Ken will lead this convention in a way that will exalt the name of Christ around the world.”

Meanwhile, Kevin Stewart, pastor of McClendon Baptist Church in West Monroe, who also hosted a rally for Hemphill to meet Louisiana Baptists, said it was Hemphill’s soul winning that garnered his commitment.

“He is a consistent and steady leader who believes and practices evangelism locally as well as worldwide,” Stewart said, adding his admiration for Hemphill’s record of executive service. “Experience goes a long way in leading a large organization like the SBC.”

Indeed, it is Hemphill’s extensive executive experience that has garnered the support of other Louisiana Baptist leaders.

Mike Holloway, pastor of Ouachita Baptist Church in West Monroe, said the downward trajectory of the Convention concerned him, citing in particular “the decline in baptisms and the growing lack of support for the Cooperative Program.”

“When I heard Dr. Ken Hemphill would be a candidate for president of our Convention I was ecstatic!” Holloway exclaimed.

“Dr. Hemphill has the experience we need to return to the days of fervent evangelism and missions with an emphasis on working together (CP) for the cause of the Kingdom of Christ,” he emphasized. “Join me in supporting this great author and visionary leader.”

Similar sentiments were expressed by Marvin Leleux, pastor of Springhill Baptist Church in Ringgold, who said, “Southern Baptists are facing one of the biggest challenges that we have ever faced before.

Clarifying that he does not endorse politicians or political parties from the pulpit, he said the issues are too critical to remain silent about the election of the SBC president.

“The battle that we are in the midst of has deep theological and doctrinal concerns that may affect our Convention, our denomination, in ways which cannot even be imagined,” he warned. “Ladies and gentlemen, we must adhere to Scripture in its proper context, and I feel with all of my heart and soul that Dr. Ken Hemphill does just that.

“His understanding of the Bible, in my humble opinion, is within the proper context. So I am extending my support, and the support of the church I pastor, to Dr. Hemphill because of seriousness of the issues at stake regarding theology and doctrine.”

By Lane Corley MADISONVILLE, La. - Three years ago, our family was going through one of those down seasons in the ups and downs of life. My mental focus and physical health was declining. I was discouraged and struggling mentally and emotionally. I knew I needed to change a few habits. As part of a recovery … END_OF_DOCUMENT_TOKEN_TO_BE_REPLACED