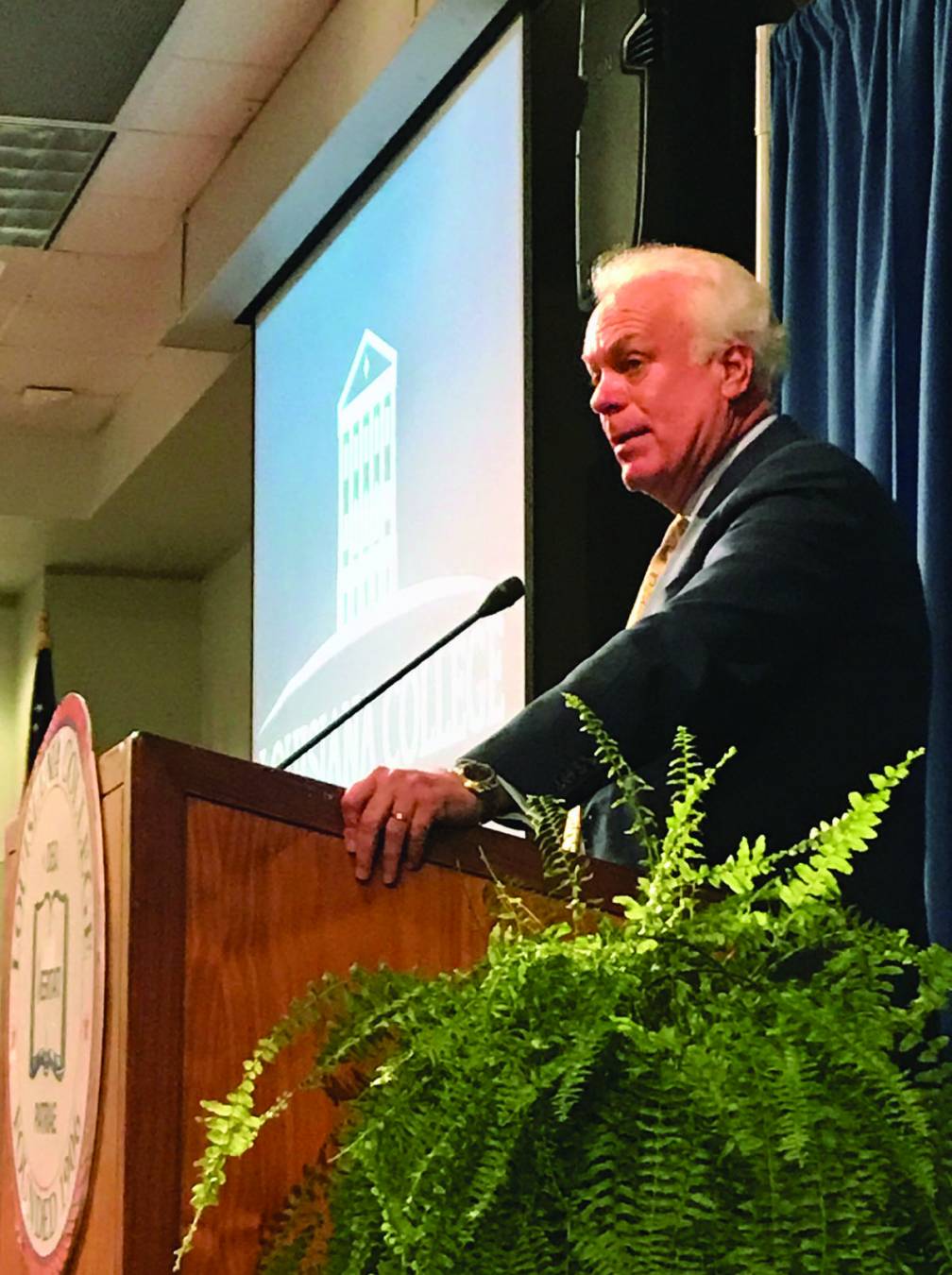 Hankins’ alliterative remarks noted the primacy of convictions, the prayer of Christians, and the power of cooperation.

Louisiana College was founded in 1916 and today is supported by Louisiana Baptists not merely to have “a fine institution of higher education” or to “give young people an excellent education” because those distinctions would make LC only one among many similar institutions, Hankins said.

Some of the convictions that began and sustain Louisiana College are “based on the fact that there is a God in heaven, who made this universe, who made us, who has a purpose for our lives, and who has revealed himself to us ultimately through his son, Jesus Christ.”

Hankins said that God has a “message for us that can redeem us from our sins and bring the kingdom of heaven to come to pass on this earth. That’s why this institution exists.” Other institutions don’t have such goals but “work pretty hard to disabuse children that come from faithful families of those notions of belief in God, in truth, in absolutes, and the belief in morality.”

Louisiana College “reaffirms and strengthens” the values that faithful parents instill in their children, Hankins said. Students who come to LC without such values “have the opportunity to hear them and come to faith in Christ.”

We also believe in the prayer of Christians, Hankins said, noting that LC’s mission is a “spiritual enterprise” that faces a “spiritual battle.”  Thankful for the prayers of the Louisiana Baptist family and others, Hankins recalled the admonition of the Apostle Paul in Ephesian 6:18, which says, “With all prayer and petition pray at all times in the Spirit, and with this in view, be on the alert with all perseverance and petition for all the saints.”

“I hope you are a prayer warrior for Louisiana College, for Dr. Brewer, the administration, faculty and students,” Hankins noted.

The power of cooperation motivates Louisiana Baptists, Hankins said, noting Proverbs 30:27, “The locusts have no king, yet all of them go out in ranks.”

Baptists have no earthly king, but “there is power when we lock arms and work together,” he said. “We see great things done for the sake of the kingdom of God.”

Hankins said almost 15 cents of every dollar given to the Cooperative Program support Louisiana College. “Louisiana Baptists believe in Louisiana College and we say so through our giving. We cooperate together and do what one church and one small group couldn’t do by themselves.”

Though thankful for the large, one-time monetary gifts that accomplish many needful things, Hankins said that doubling the size of the President’s Club would close many gaps and “help Louisiana College keep its financial footing. There is power in that. Don’t ever gainsay that little start, that widow’s mite, that part that you can do with the means God has given you. There is power in cooperation.”

LC President Rick Brewer told LCNews he is “grateful for a denominational leader like Dr. Hankins, who will champion the cause of Louisiana College and our other LBC entities.”

“I am also grateful for the ‘power of cooperation’ as noted by Dr. Hankins, and our students are, too,” Brewer said. “We often remind students that, without CP support, their education would cost $3,000 more per year. The Louisiana College family remains deeply grateful for our Louisiana Baptist family’s support through the Cooperative Program.”

Brewer also underscored the College’s “differentiating value proposition — that which makes us unique — is our curricula built upon a Christian worldview. This is what faith integration is all about. We are grateful for those who lock arms with us and move forward in ranks as we fulfill our vision of preparing graduates and transforming lives.”

By Jill Waggoner, ERLC WASHINGTON, D.C. (ERLC) - Richard Land served as the president of the Ethics & Religious Liberty Commission from 1988–2013. Prior to his time at the ERLC, he worked in a variety of church and political roles, many of which were involved closely with the modern pro-life movement in its … END_OF_DOCUMENT_TOKEN_TO_BE_REPLACED