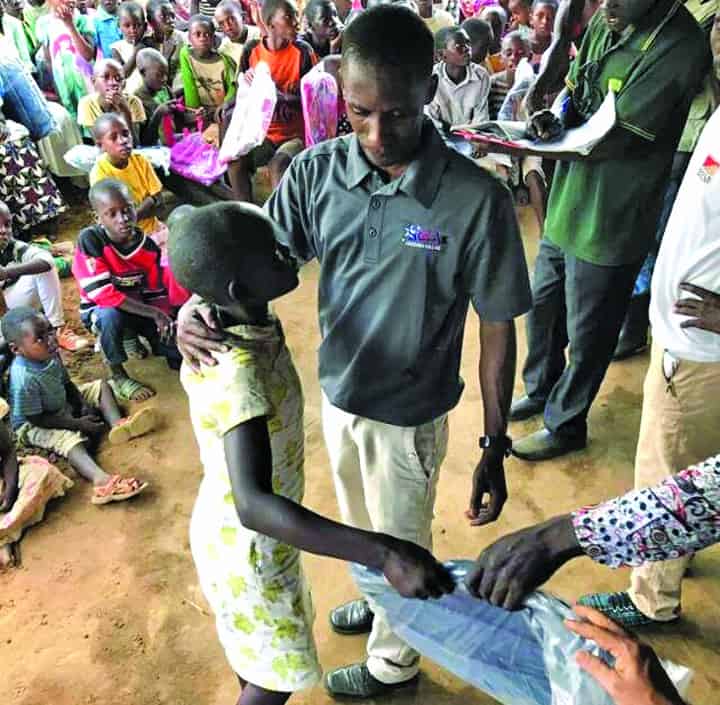 Lievin Manisha gives a school backpack to a Burundian student in the Nakivale Refugee Camp in Uganda.

The student from Burundi took part in an expedition that visited one of the biggest settlements of refugees in Central Africa, Nakivale Refugee Camp in Uganda, where he helped distribute backpacks to school kids, and buckets and water filters to over 100 families. Importantly, he also used the opportunity to share the Gospel with some of his 8,000 expatriated Burundian compatriots living in Nakivale.

“I was very touched. I encouraged them to keep going,” Manisha recalled. “I told them that I had been in their shoes; that I am not better than them. I told them not to give up.”

It was Manisha’s first visit to Africa since he moved to the United States in 2014.

Manisha was 6 years old when he lost his family in the civil war between the two predominant Burundian ethnicities – the Hutu majority, and the Tutsi minority.

The Hutu’s mass killing of Tutsi civilians was followed by a lengthy armed conflict between the two ethnic groups that did not end until 2006.

It was during that extended conflict that a group of rebels kidnapped Manisha when he was 12 years old. He survived that ordeal and in 2005 arrived in South Africa as a refugee, living there for 9 years, mostly in Johannesburg.

As a 16-year-old, he worked 12-hour night shifts with a security company while attending high school in the mornings. When he quit that job and could not afford paying for rent any longer, he moved to a shelter run by the Jesuit Refugee Service and graduated from Jules High School in Johannesburg.

Louisiana College was his bridge to the United States, providing him passage across the ocean.

“I did not choose Louisiana College. LC chose me,” Manisha told the Baptist Message. “It was God’s will. I realized that all I had lived was part of God’s plan.”

An orphan who had fled a war-torn country, who had worked for his daily bread while also managing to graduate from high school, Manisha had been fighting to survive all his life. Then, all at once, he did not have to anymore.

“Louisiana College brought me peace. Believe me when I say that I had seen hell,” Manisha said emphatically. “It was an opportunity for me to grow, to understand how things were away from Africa.”

Lievin Manisha was not always a religious man. He was exposed to the Catholic faith, but the harsh reality of his life made it hard for him to believe in God.

“I used to make fun of people who went to church,” the college senior confessed. “I did not understand why they participated in the service – with the terrible situation they were facing.”

However, through the work of the Baptist Collegiate Ministry of Louisiana State University, in South Africa in 2010, he was transformed from an orphaned child of war to an adopted child of God.

The LSU BCM team helped him to encounter God, and he asked for forgiveness of his sins and from that moment sincerely revered Christ as Lord in his heart.

“I saw God’s hand in my past,” Manisha explained. “I looked back, and I could see His presence in my life.”

After his salvation experience, Manisha worked with an American family of missionaries to establish a church in the 133-year-old town of Upington in the Northern Cape province of South Africa. Swahili Baptist Church became a spiritual home for immigrants who could not attend other services because of language barriers.

He understood then that his life was more than a dramatic tale, but instead was a compelling testimony about salvation, and he has written a novel which will be published soon.

“I do not want fame,” Manisha said. “I wrote my own story to inspire others, to offer hope to those who are struggling.”

The Burundian is studying Political Science and will graduate with a degree in Public Administration next December. Once a political activist, he now is a missionary dedicated to spiritual change while also engaging the political process to improve the lives of the poor.

Moreover, he hopes to challenge others like him around the world to come back home to Africa to help implement change.

“Well-educated Africans living abroad do not want to look back,” Manisha lamented. “I do not understand why they do not come back to help.”

“A leader who provides for his people would not let them live in those conditions,” Manisha observed. But he also is mindful that the northern part of the continent is a large part of the 10/40 Window, where spiritual darkness persists. “Likewise, a compassionate Christian cannot allow these hundreds of millions of people to die without hearing the Good News of Jesus,” he declared.

By Jill Waggoner, ERLC WASHINGTON, D.C. (ERLC) - Richard Land served as the president of the Ethics & Religious Liberty Commission from 1988–2013. Prior to his time at the ERLC, he worked in a variety of church and political roles, many of which were involved closely with the modern pro-life movement in its … END_OF_DOCUMENT_TOKEN_TO_BE_REPLACED