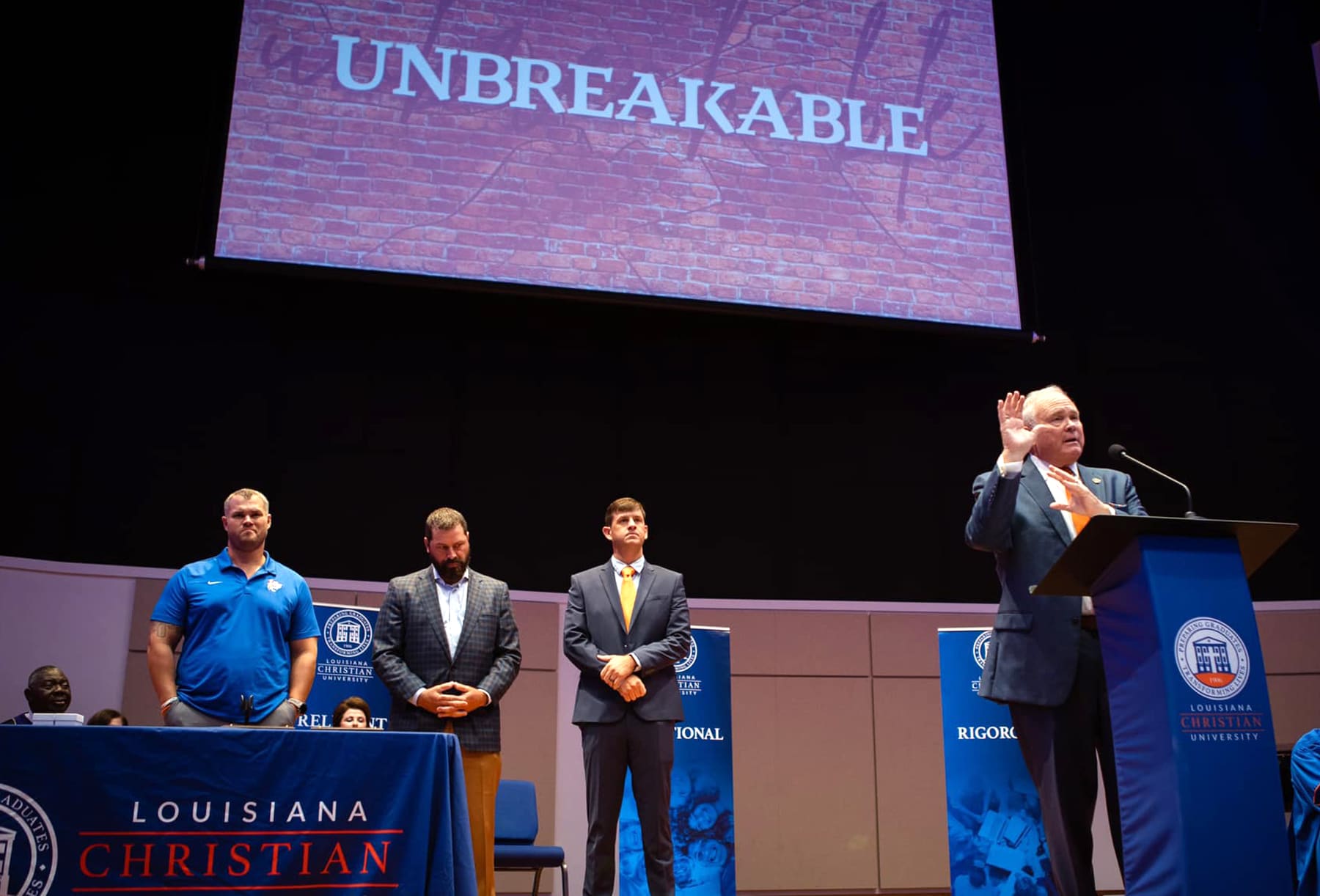 PINEVILLE, La. (LCU News) – The first chapel of the 2022-2023 school year on Tuesday, Aug. 26, proved to be a busy one as the school welcomed its 2026 freshman class and honored former and present athletes and their accomplishments.

Martina Terra Garcia became the program’s first to receive All-America honors as she was an honorable mention selection.

“You all have set a standard for the other programs to live up to for all the positive attention you have brought this institution,” Brewer said.

Brewer highlighted the athletic accomplishments of all the school’s athletic teams made during its first year competing in the National Association of Intercollegiate Athletics.

“These young men helped revitalize football when it returned in 2000,” Brewer said. “We stand on their shoulders and those of the people who came before them.”

PRESIDENT FOR A DAY

Current LCU quarterback Sal Palermo was named this year’s ‘President For a Day.’ In recognizing Palermo, Brewer said “If Sal continues playing like he has, he may surpass some of the records and be that fourth pillar.”

Mason began as the Wildcats men’s basketball coach in 2015 and was promoted to the school’s athletic director in the summer of 2017.

“I am grateful to God first and foremost for the opportunity to continue to serve at LCU,” Mason said. “This promotion is an example of Gods faithfulness and provision to myself and my family. I would like to thank Dr. Brewer for his continued trust of me in my role. There is still much work to get done.”

Since taking over the role of athletic director, Mason has not only focused on the hardcourt but in the classroom as well. The cumulative GPA of all Wildcat student-athletes has risen from a 2.7 at the end of the 2015-2016 academic year to a 3.0 following 2019-20.

He has overseen LCU’s transition from NCAA Division III to the NAIA and improvements in the athletic programs, including more chances for female student-athletes with the addition of the LCU women’s volleyball team, and new turf at Wildcat Field for the first time since the stadium was built.

“He has earned this and deserves it, and I am looking forward to his continued Christian leadership for many years ahead,” Brewer said. “Athletics has always had an important voice at the table, but this elevates the importance of athletics at LCU.”

Brewer also announced three new athletic awards to be given this year in honor of a trio of outstanding alumni.

“Shelia Johnson, Dr. Michael Brunet and Dr. Mike Talbert, who passed away in 2020, were outstanding student-athletes at LC in their day,” Brewer said, “and they have remained servant leaders in this community and this state, and we wanted to honor their legacies.”

The Mike Talbert Sr. Male Athlete of the Year award is named for two-year standout and a member of the 1978-79 Wildcats’ basketball team. Talbert, a 2015 inductee in the school’s Hall of Fame, died in 2020. He was part of the team that earned the university’s first appearance in the NAIA National Championship Tournament.

The Sheila Thompson Johnson Female Athlete of the Year award is named for the two-time All-American Women’s Basketball player for LCU who played from 1977-81 and is member of the Louisiana Sports Hall of Fame. She also coached the Lady Wildcats to the NAIA National Semifinals in 1985-86 and served as the school’s athletic director.

Both the Male and Female Athlete of the Year Awards will be given to a student athletes who have demonstrated outstanding athleticism, sportsmanship and Christian leadership.

The Dr. Mike Brunet Champion of Character is named in honor of the former student athlete who also served as the LCU team doctor until his recent retirement. This annual award will be chosen by the athletes, coaches, and athletic administration.