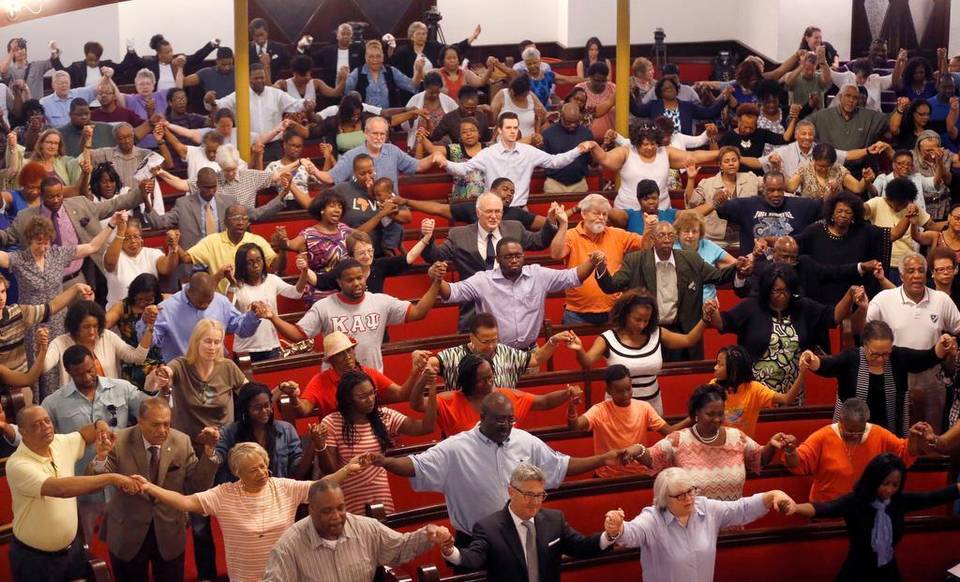 Attendees raise their hands in unity and prayer during the benediction of a prayer vigil at St. Paul AME church in Charleston, SC. Photo courtesy of Ethan Haymon/News Observer

CHARLESTON, S.C. (BP) — The national media spotlight has been on Charleston for several days following the massacre of nine Christians during a Wednesday night Bible study at the predominantly black Emanuel AME Church. A 21-year-old white supremacist, Dylann Storm Roof, joined in the service for about an hour before opening fire on the group.

This act of racist hate could have exploded into confusion and violence, but the light from Charleston has shone brighter than the media light that has been on the picturesque South Carolina city.

Roof said he chose Charleston “because it is the most historic city in my state. Someone has to take it to the real world, and I guess that has to be me.” What Roof soon discovered was that the hate and evil he demonstrated was met with real-world Christians who chose to respond with what seemed like unbelievable love and forgiveness.

Chris Singleton, a sophomore at Charleston Southern University and member of the baseball team, felt the pain of the attack. His mother was one of the nine who was shot and killed. Less than 24 hours following her death, he said, “Love is always stronger than hate.” Charleston Mayor Joseph P. Riley said, “If that guy thought in his tortured mind that he was going to divide the races, it had the opposite effect.”

The Charleston Post and Courier wrote, “In a remarkable display of joy, sorrow, and trust, worshippers at Emanuel AME Church on Sunday morning honored slain parishioners by celebrating the power of faith and community.”

Norvell Goff, elder in charge of the AME Edisto district that includes Emanuel, said, “A lot of people expected us to do something strange and break out in a riot. Well, they just don’t know us.” Members of the church made comments like, “We are bent but not broken” and “We are not going to let hate win.” Many grieving family members said they forgave Roof, encouraging him to trust Christ as his Savior.

Marshall Blalock, senior pastor of Charleston First Baptist, said, “This tragedy was a despicable act of hatred, that no one can understand. God, in his goodness and sovereignty, has inspired these families to magnify the blessing of grace and prevailing love in the midst of what was intended for evil. Now that we have a week of funerals, I ask that you pray for the families who are enduring the pain of this experience in a way that perhaps exceeds the initial shock. This week will be an emotional one for our city, particularly the families of Emanuel Church.”

Churches across denominational lines have joined together in a show of support for Emanuel. Blalock noted, “The beauty and power of the Gospel was on display at the bond hearing where black lay Christians from Emanuel AME Church gave the greatest Gospel witness in the history of our city. One after another, families forgave the man who killed their loved ones and even called on him to repent and receive Christ as his Savior.” Blalock added that the love and grace of these Christians had inspired Charleston and “has created a Gospel conversation throughout the city.”

South Carolina Rep. Davey Hiott, a member of Pickens First Baptist Church, said, “It is hard to put into words how someone could have that much hate built up inside of them to carry out such a horrific tragedy. The most inspiring part of the whole ordeal is the way the AME church and Charleston people have responded. Many expected racial tension and division, but what they got was comfort, care, love and forgiveness. The families involved are to be commended for their selfless response to senseless killing. What man intended for bad, God can — and will — use for good.”

On Sunday night, a walk across the Arthur Ravenel Bridge meant as a display of solidarity turned into a celebration of unity, faith and hope. Organizers anticipated 3,000, but police estimated the crowd to be well over 10,000.

Our nation can say to Charleston, with deep gratitude, “Thank you for showing us the better way.” The light that is shining from the “Holy City,” nicknamed because of its many churches, touches us all. In this struggle between love and hate, love won.

We have seen the power and truth of God in action — not in times of ease, but in a time of great tragedy. Roof brought murder to the real world and found that the darkness of that evil providentially became the backdrop for God’s light to shine even more brightly.

As most of our state mourns this great injustice and prays for the families of the deceased, we are also encouraged by the testimony of God’s people.

There is a light in Charleston that shines brightly.