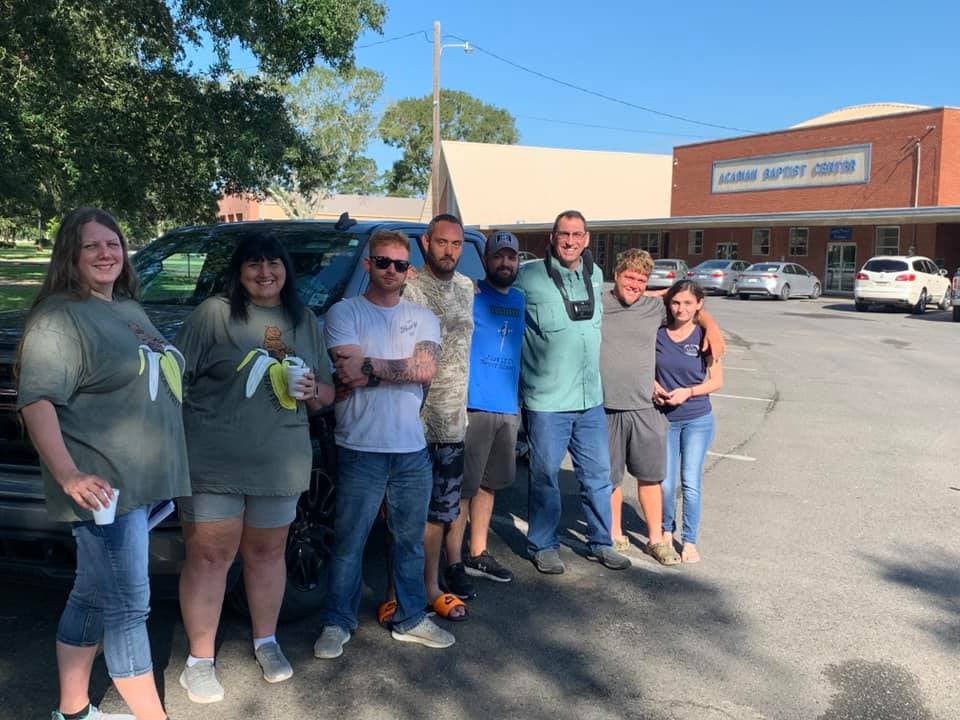 James Newsom, director of Acadian Baptist Center in Eunice, told the Baptist Message 120 linemen and 70 members of First Baptist Church, Golden Meadow, and their families are residing at the camp.

Newsom said the camp is providing rooms, meals and household items, and added that area pastors have visited the camp to pray with the evacuees.

“It’s really sad knowing the heartache and devastation they are going through,” Newsom said. “Pray that God would use this hurricane to bring people into the Kingdom and that He would send people to come help the church and families rebuild.”

Matthew Chouest, FBCGM pastor, said he is grateful for the ABC, which regularly hosts members from his congregation at annual summer camps and men’s retreats, and Louisiana Baptist Disaster Relief, which already is giving assistance.

He also told Baptist Message that already individuals and congregations from around the country have expressed interest in donating funds and supplies and coming to help rebuild as well as minister to the community.

Chouest, who returned to his church earlier in the week, said he is thankful that the church building was not destroyed. The building sustained some roof damage and took in some water.

“No matter how bad this situation may look, the Lord is using it for His glory,” Chouest said. “We will glorify Him and witness in His name as we do disaster relief. Many folks are calling that want to help and are on stand-by to wait for opportunity to come minister. I can’t even describe how amazing the resources we have as Southern Baptists after a storm.”

Chouest asked for prayers as the congregation moves forward.

“We need the encouragement because this is emotionally draining and it gets to you,” Chouest said. “It’s going to be okay, and the Lord is going to take care of His people. We have to figure out how we minister and start recovery.”

Despite losing electricity, Camp Living Waters in Loranger took in personnel — with their families — from six nursing homes in LaFourche, Houma, Harvey and New Orleans. CLW lacks phone and power service, but Baptist Message obtained this information from the director of a different camp. Todd Burnaman, director of Dry Creek Camp, said he and his staff went to CLW to help his fellow Louisiana Baptist camp ministry.

Burnaman and his team returned to Dry Creek Camp, where they had hosted 15 students from a boarding school in Lafayette Aug. 29-31 and are still housing 10 families from New Orleans Baptist Theological Seminary. Due to power outages, NOBTS cancelled classes through the end of the week and has not announced a date to resume classes.

“We are happy to house evacuees at our camp, but at the same time are excited to be extra hands and feet for another camp,” Burnaman said. “Last year, when Hurricane Laura heavily damaged our property, we have five different camps show up within the first week to help us out. I couldn’t imagine getting through that first week without those other camp folks there, so we decided to be that same blessing to Scott (Mercer) at Camp Living Waters.”

Tall Timbers Baptist Conference Center in Woodworth is housing the Southern Baptists of Texas Convention Disaster Relief team that is manning the incident command center at the Baptist Building in Alexandria and previously welcomed 15 members of the Good Shepherd Hispanic Baptist Church in Metairie earlier in the week.

“It’s been good to have a safe place for all of those who came, no matter if it’s just a short time or a little longer,” Bumgardner said.

Any tool can be misused. A hammer can construct or kill. An electrical wire can give instant light or, if mishandled, bring sudden death. … END_OF_DOCUMENT_TOKEN_TO_BE_REPLACED