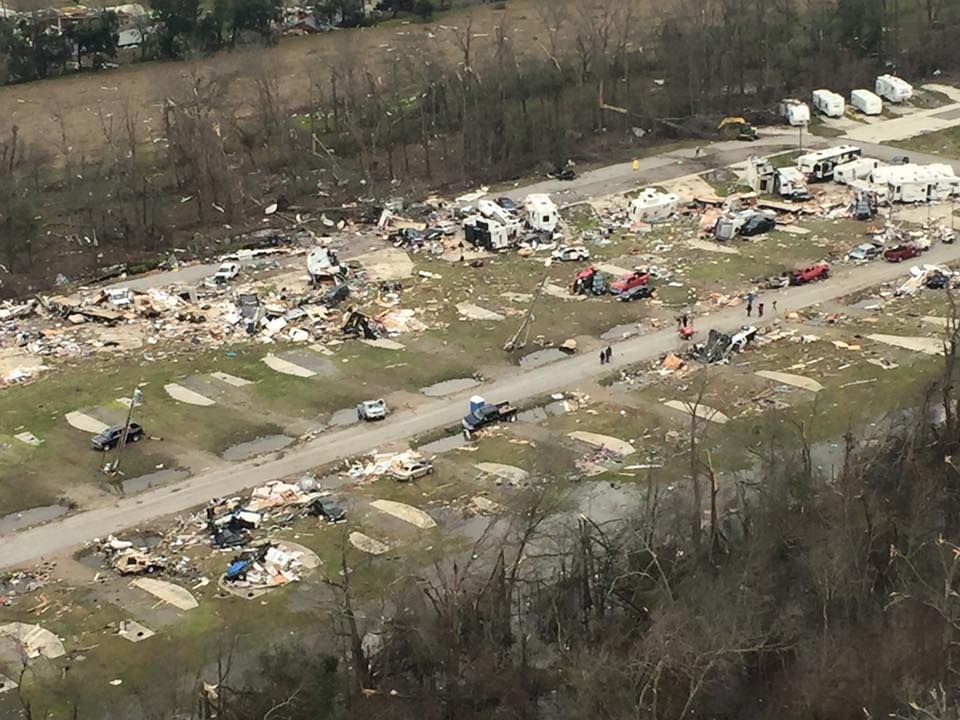 As many spent today assessing the damage, Louisiana Baptist Disaster Relief Teams are prepping their gear as they prepare to respond as early as Thursday.

“We haven’t had a major storm recently in the state, but it takes just one event to remind people of a need to reach out and pick up a tarp, work on a chainsaw unit or serve a meal,” Long said. “It’s so important we get our people and churches involved in disaster relief. This is one of the largest ministry arms we have in our convention.”

According to the National Weather Service, seven tornadoes touched down in Louisiana Tuesday. The outbreak was caused by a strong low pressure system that moved in from Texas early  that morning but was completely out of the state by 9 p.m.

The powerful storm ripped through Louisiana killing two in an RV park while damaging hundreds of homes in LaPlace Tuesday afternoon.

Authorities in St. James Parish at 6 a.m. Wednesday said they continue to search the Sugar Hill RV park in Convent for survivors. Three people are still missing. About 300 people lived in the park. Thirty were transported in ambulances after a tornado toppled campers and vehicles. Two deaths have been confirmed and seven people were in critical condition late Tuesday. About 100 RVs were damaged.

High winds and heavy rainfall left as many as 26,000 without power at some point in the day and many schools and businesses shut down earlier in the day as a precautionary measure as the storms approached..

“I ask all Louisianans to pray for the victims of the terrible storms that touched down in Louisiana today and especially at the Sugar Hill RV Park in Convent,” Edwards said in a news release from the Governor’s Office of Homeland Security and Emergency Preparedness. “And let us not forget their families and the first responders working so tirelessly tonight to save lives. We will do all that we can to help restore the families, businesses and communities destroyed by this tragedy.” 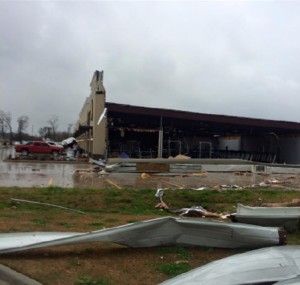 This Gold’s Gym in Prairieville was among the many businesses damaged during a tornado on Feb. 23, 2016. Photo by Governor’s Office of Homeland Security

In Ascension Parish, multiple businesses and homes reported structural damage, including a group of businesses near one another off Airline Highway in Prairieville that included a newly built Gold’s Gym, Agave Blue restaurant and Investar Bank.

Livingston saw a power line fall on an occupied vehicle off US Highway 190, but no one inside was injured. Between 20 and 25 homes sustained damage in the town.

In Paincourtville, a True Value store, LeBlanc’s Brother concrete plant and the Assumption water tower sustained significant damage. A few miles to the east, a small funnel cloud touched the FedEx facility on the grounds of Louis Armstrong International Airport in Kenner, though no damages or injuries were reported.

Anyone wanting to help can donate money for disaster relief operations by clicking here. Long added for more information,  individuals can contact their local Baptist church or association, or call the state disaster relief office at 318.448.3402.

Look for additional updates at baptistmessage.com as the story develops.

By Lane Corley MADISONVILLE, La. - Three years ago, our family was going through one of those down seasons in the ups and downs of life. My mental focus and physical health was declining. I was discouraged and struggling mentally and emotionally. I knew I needed to change a few habits. As part of a recovery … END_OF_DOCUMENT_TOKEN_TO_BE_REPLACED