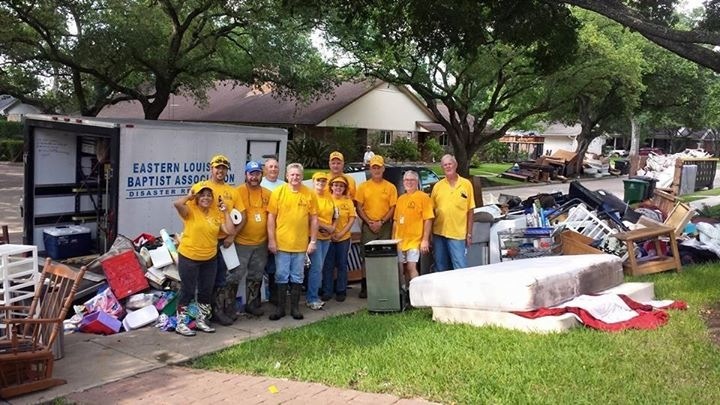 Louisiana Baptist Disaster Relief teams are responding to an area in Oklahoma devastated by a tornado in Oklahoma and a suburb of Houston, Texas, that saw historic rainfall in late May.
Two mudout teams are in Missouri City, Texas, a town located about 18 miles southwest of Houston. East Fork Baptist Church in Kentwood and Coteau Baptist Church in Houma arrived in the area on Tuesday and will remain there until today. Nearly 1,800 homes were underwater in the community, according to Gibbie McMillan, Louisiana Baptist Disaster Relief state director. McMillan said the response there could take up to a year.
Meanwhile, two chainsaw teams are ministering in Poteau, Okla., where a tornado destroyed six homes and damaged another 50 structures, according to LeFlore County’s emergency management. The teams from Sabine Baptist Association left on Thursday and will return the following week.
McMillan said Louisiana Baptists wanting to help can do so in three ways – pray, give and go.
“In a magnitude of this disaster and with this many people affected, you do what you have to do,” McMillan said. “We will stay until the job is finished.”
Scottie Stice, director of Disaster Relief Ministries for the Southern Baptists of Texas Convention, said in a Baptist Press article that May has produced “very strange” weather patterns across the state. He reported teams have worked throughout the state to respond to the massive flooding.
“We were in 11 different places in May,” Stice told Baptist Press.
Sam Porter, state director of disaster relief for the Baptist General Convention of Oklahoma (BGCO), said in a Baptist Press article that 2015 has been an unusual and record year in many ways for his state.
A record 25-30 small tornadoes spotted across Oklahoma were followed by two major tornadoes in Moore, Okla., in March, and then a massive amount of rain in May.
“This thing is getting to biblical proportions,” Porter said in the Baptist Press article. “We are having floods everywhere. There are not enough mud-out guys across the Southern Baptist Convention to handle this.”
Porter said the recent memory of 21 people who accepted Christ in areas affected by the tornadoes and flooding keeps him moving forward.
“We do this because we love God,” he said. “We do disaster relief to earn the right to share the Gospel.”
For more information on donating to disaster relief efforts, go to louisianabaptists.org/donate. Those wanting to be a part of a disaster relief team should call 318.448.3402.