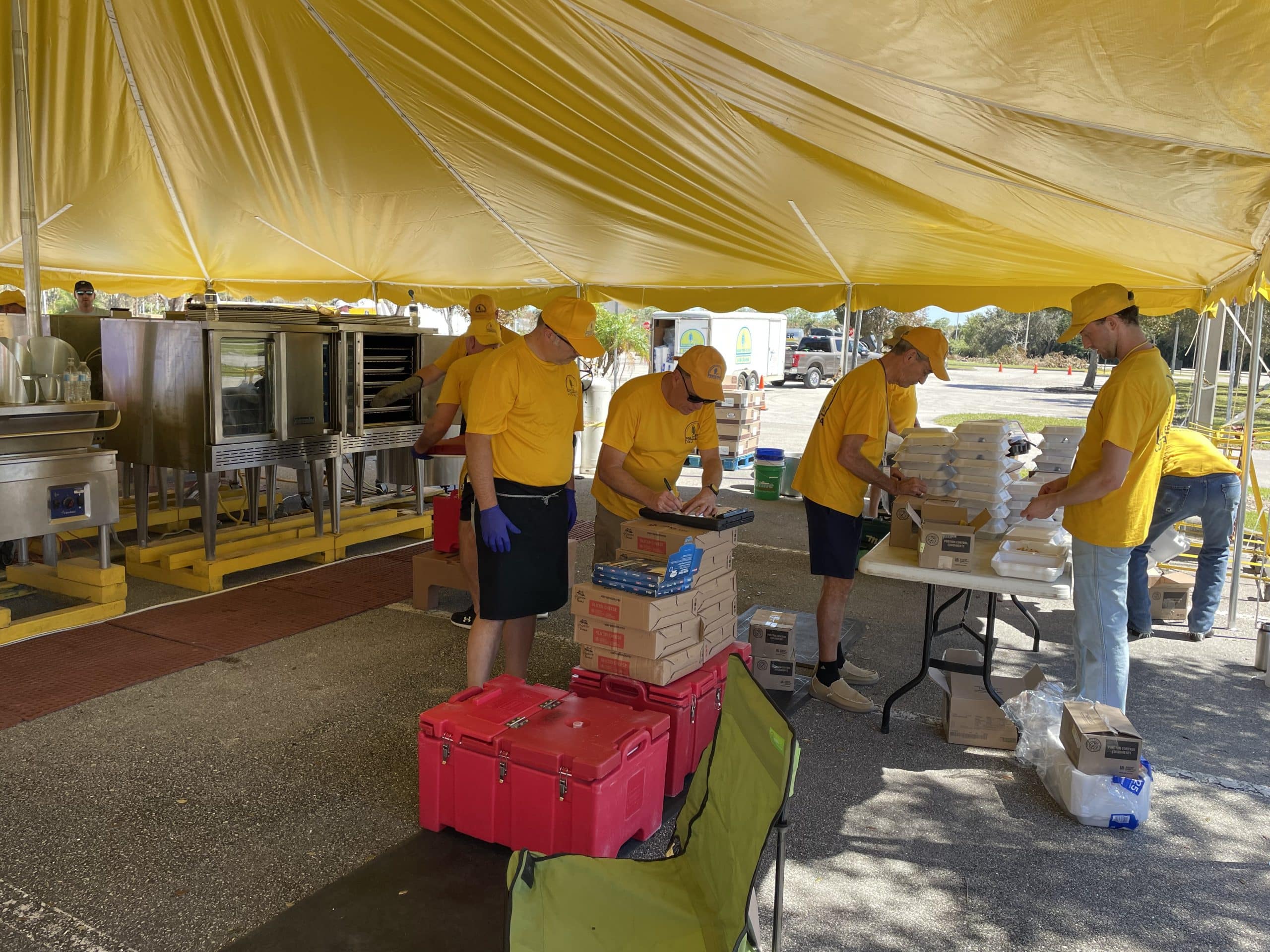 A feeding team from Rolling Hills Ministry, Ruston, prepares some of the 2,100 meals that were served to those impacted by Hurricane Ian in Naples, Florida. John Hebert photo

NAPLES, Florida (LBM) – Less than a week after Hurricane Ian slammed into the southwest Florida coast, Louisiana Baptist Disaster Relief teams are on the ground to “give a cup of cold water in Jesus’ name” to those affected by the powerful storm.

Assisting Louisiana were teams from the Texas Baptist Men and Ohio Baptist Convention.

The feeding team on Monday cooked 2,100 meals that were distributed to residents impacted by the storm. Hebert said they may serve up to 5,000 meals on Tuesday.

Mud out teams are expected to arrive later this week to work in homes that were severely damaged by the storm, which made landfall Sept. 28 near Cayo Costa, a protected barrier island 50 miles north of Naples. Ian brought catastrophic winds of 155 mph (two miles shy of Category 5 strength), rain and an estimated 12-foot storm surge to cities in its direct path.

Hebert said while he is unsure how long the teams will work in the area, he is certain the residents will need encouragement for the foreseeable future as they look to rebuild.

“Our biggest prayer requests are for our disaster relief system to work as it is supposed to do so and we our people get here and engage with residents,” Hebert told the Baptist Message. “Things have gone smoothly so far.

“The hurricane changed course and they only gave people a six-hour notice to evacuate,” he continued. “So a lot of people got caught on the island and many of them probably perished. So, pray for those families who lost missing loved ones and who will be hurting.”

As of Tuesday, Oct. 4, the death toll in the devastated state has risen to 99.

FBC Naples is one of nine Southern Baptist Disaster Relief sites serving hot meals and providing clean up and recovery assistance, according to the Florida Baptist Convention. Teams from Alabama, Florida, Louisiana, Mississippi, Missouri, North Carolina and Texas had sent teams to the state on Monday.

“With our nine feeding units that are already up and operational, we have the capacity to feed 160,000 people per day,” Tommy Green, executive director-treasurer of the Florida Baptist Convention, said on the convention’s website. ““This is just a beautiful cooperative effort of the family of God coming together. Be in prayer that God will use this to make His name and fame known in this area and that many people will seek Christ and come to know Him as Lord and Savior through the efforts of disaster relief.”

Meanwhile, the Royal Palm Baptist Association near Ft. Myers, Florida, has contacted Beauregard Baptist Association with a request by Oct. 13 for 150 five-gallon buckets of muck-out supplies to help storm victims. The association also is seeking volunteers to transport the buckets Oct. 14, and possibly in subsequent weeks as needed.

Donations should be delivered to Beauregard Baptist Association’s office at 735 West Drive in DeRidder.

For more information on giving to relief efforts or participating as a volunteer on the field, visit https://louisianabaptists.org/about/teams/missions-ministry/disaster-relief/.