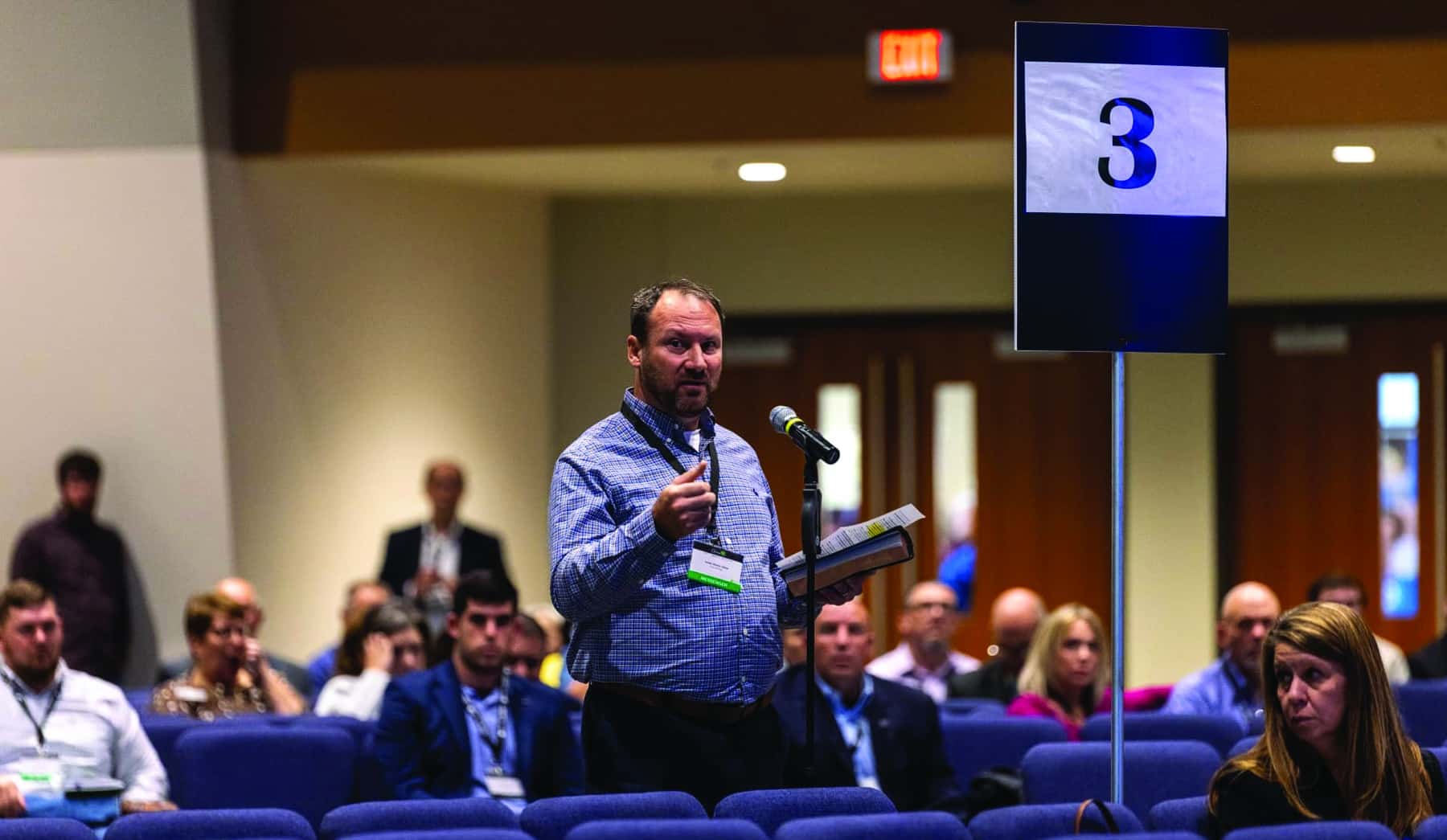 Kevin Ulmer, a messenger from First Baptist Church, Ferriday, spoke during a time of debate about a resolution at the LBC Annual Meeting. Brian Blackwell photo

Messengers approved five resolutions: expression of appreciation for North Monroe Baptist Church’s hosting of the 2021 LBC Annual Meeting; gratitude for disaster relief ‘partners in the Gospel’; the importance of the Annual Church Profile; the sufficiency of Scripture for race and racial reconciliation; and support for the Louisiana Fairness in Women’s Sport Act (preventing biological males from participating on teams designated for women, a bill which enjoyed overwhelming support from lawmakers but was vetoed by the governor).

But two messengers tried to amend the “Resolution: On the Sufficiency of Scripture for Race and Racial Reconciliation.”

This resolution was drafted to address the controversial concepts of Critical Race Theory and Intersectionality, both of which have become hot topics in school districts across the country and during the 2021 election cycle. But concern about both was raised among Southern Baptists after Resolution 9 was adopted by messengers to the 2019 SBC Annual Meeting. That resolution commended both Marxist statements as “useful analytical tools” to “aid in evaluating a variety of human experiences.”

Southern Baptists attempted to correct Resolution 9 during the 2021 SBC Annual Meeting by adopting Resolution 2 that condemned “any theory or worldview that … finds the ultimate identity of human beings in ethnicity … sees the primary problem of humanity as anything other than sin … denies that racism, oppression, or discrimination is rooted, ultimately, in anything other than sin.”

However, the SBC resolution stopped short of naming Critical Race Theory and Intersectionality as sinful.

The LBC Resolutions Committee used the same language of the SBC resolution in the LBC resolution, but specifically named Critical Race Theory and Intersectionality as unbiblical concepts.

LBC messenger Richard Methvin, a messenger from Bistineau Baptist Church, Heflin, made a motion to strike a paragraph from the LBC resolution that documented that Southern Baptists had repented for the sin of racism in 1995. Methvin felt that the paragraph appeared to keep Southern Baptists “in a state of apology.”

LBC Resolutions Committee Chair Johnny B. Hoychick, a member of the First Baptist Church, Rayville, explained that the committee was unanimous that the “language was proper and so we feel that it should be left in as is.” Using raised ballots, the majority of messengers supported the committee.

Michael Linton, a messenger from First Baptist Church, Sulphur, asked that the resolution be amended to not completely condemn Critical Race Theory and Intersectionality, arguing that “there may be some truth in there to be found somewhere.” Hoychick responded by pointing out “There’s only one way for reconciliation and that’s through Jesus,” adding that “There’s no man-made theory that will reconcile people.” He concluded by noting that “from the committee’s perspective,” specifically condemning Critical Race Theory and Intersectionality addressed “those things that are out in the culture right now” and that the wording clearly stated “what we mean and what we stand on. We stand on Scripture.” Messengers overwhelmingly agreed by raised ballots.

During the morning session, the motion was ruled out of order by the Committee on the Order of Business. But Fuller brought the matter up again in the afternoon during miscellaneous business, at which time messengers voted by raised ballots not to consider the motion.

Messengers approved a Cooperative Program budget of $17,626,136, a decrease of $1,027,564, or 5.5 percent. Cooperative Program projections are based on actual receipts from August 2020 through July 2021. The allocation formula for distributing Cooperative Program gifts between the Southern Baptist Convention and Louisiana Baptist causes was not changed, 63.26 percent to support ministries in the state and 36.74 percent to be forwarded to fund national entities.

The 2022 Annual Meeting is scheduled for Nov. 15 and will be held in Alexandria at Calvary Baptist Church.