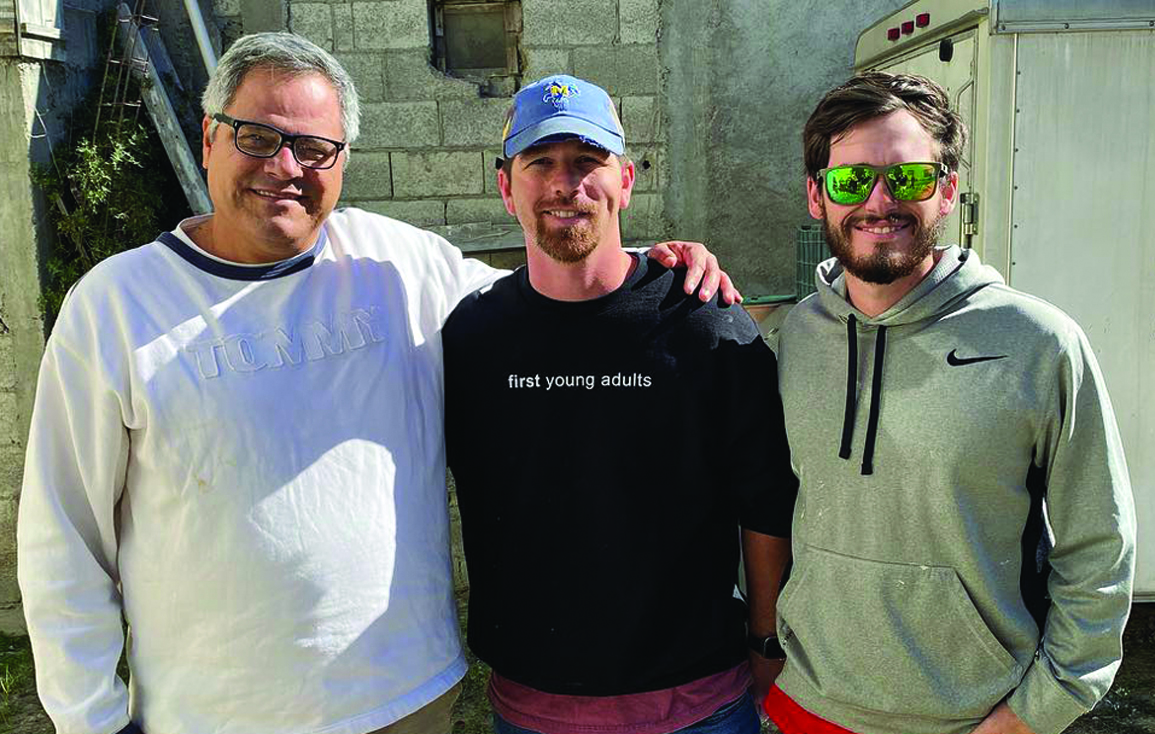 Blake Grundy (middle) enjoyed a time of fellowship with members of a church in Acuna, Mexico. He is director of the McNeese State University Baptist Collegiate Ministry. Submitted photo

PIEDRAS NEGRAS, Mexico (LBM) – A team of 175 students and staff from six Baptist Collegiate Ministries in the state spent part of their Christmas break sharing the Gospel with thousands in Mexico.

By the conclusion of the Dec. 7-14 mission trip in the state of Coahuila near the U.S.-Mexico border, the team witnessed 110 salvation decisions.

Louisiana State University BCM Director Steve Masters said he was overjoyed with the stu[1]dents’ attitude of serving others first, no matter the unfamiliar situations they faced.

“The students worked so hard and so selflessly,” Masters told the Baptist Message. “They put in long hours of work but had a lot of fun. They laughed, they prayed, they served, they gave.”

The students formed into small groups and worked with more than 300 children and teenagers in Bible clubs. They also led worship services at area churches, performed construction projects and helped disciple church members. LSU BCM member Brenden Williams said the trip reinforced his faith in Christ and forced him to trust Him more.

“God reminded me of how blessed I was and to not take that for granted,” he said. “I must use this gift to further the Kingdom. God challenged me by His reminder of the issues in Mexico and how much more I can do and should do at home.”

McNeese State BCM Director Blake Grundy said he was encouraged to see so many students step up to serve.

“We were able to encourage all ages in the congregations with biblical teaching,” he said. “Many people surrendered to Christ during the week. It was truly a blessing for everyone involved in building God’s Kingdom.”

McNeese State BCM member Abigail Barrow said the trip fulfilled a childhood dream of helping make disciples in Mexico. During a service at a youth rally in Acuna, Barrow and her fellow BCM team members joined the Hispanic youngsters in singing “Lord, I Need You.”

“Even though we had the divide of languages, we all worshiped and served the same God,” she said. “I feel like that night was a taste of what heaven will be like.”

LCU BCM member Korey Kincade was given the chance to preach when another team member (who was scheduled to deliver the evening youth rally message) suddenly fell ill. Kincade said he enjoyed preaching to both Louisianians and Hispanic youth and their parents.

“The thing that made it really special was that I was preaching to Chris tians from two countries,” Kincade said. “We came together that night as one brotherhood in Christ in a small church in Acuña — together as one people that didn’t care about race, family status, or poverty levels. We bonded as a fellowship of believers with one common goal, to keep our eyes and hearts on God.”

According to Masters, the LSU BCM has been involved with a Mexico mission trip since 1992, with the exceptions of 2010-2015 when travel was prohibitive due to drug cartel violence, and in 2020, when they did not travel to the country because of COVID restrictions.

Masters said that after he spoke with pastors in the country, International Mission Board representatives, border patrol officers and other government officials, he is confident that working in the Piedras Negras area is safe for mission teams; and he encourages others to consider going there to share Christ’s love.

Masters said the mission trip has become an annual tradition for his family. Though his three daughters are no longer participating because they have moved out of state, Masters said they still have fond memories of time spent in Mexico.

“I started taking my girls on BCM mission trips after they turned seven,” he said. “My girls went 10 years as children and teenagers and then four years as college students. It was one of the best things I did for them.

“Happiness not based on material goods but on God and your church,” he continued. “There is something about going to a third world country and serving. You see the true meaning of love and support of church members.

“I invite many more groups to come and serve in Mexico,” he said. “If I can help in any way to set up ministry, I would be glad to do so.”

By JT Waresak I'm not a huge New Year's resolution guy. However, as a new year begins, it is another opportunity to raise the bar in my effort to be the best dad I can be. I'm also reminded that the opportune time to pour into my sons and daughters is limited to a couple of precious decades. This is not to say … END_OF_DOCUMENT_TOKEN_TO_BE_REPLACED