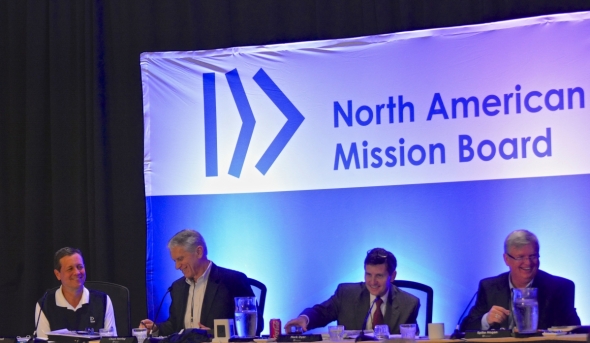 NAMB trustees approved a recommendation by officers indicating their satisfaction with a review of the Southern Baptist entity's relationship with the Mid-Atlantic Baptist Network (previously the Baptist Convention of Maryland/Delaware, or BCMD), June 13, 2016. NAMB president Kevin Ezell is seated on the left.

AMORY, Miss. (LBM) – Recently released materials filed and referenced by attorneys for Will McRaney in his lawsuit against the North American Mission Board, which is alleged to have illegally interfered in McRaney’s employment as executive director of the Baptist Convention of Maryland/Delaware and other potential work opportunities, appear to show that leaders of the Southern Baptist Convention’s domestic missions entity took actions which harmed McRaney’s ability to earn a living.

In an Oct. 26, 2022, filing with the U.S. District Court for the Northern District of Mississippi, McRaney’s attorneys excerpted statements from two affidavits (both notarized in October 2018) and the minutes of a February 2015 meeting of the NAMB trustee executive committee to make their case.

The NAMB minutes referred to steps it took to end cooperation with the BCMD — an action that NAMB described as a “disciplinal process.” According to the record of those proceedings, which took place at the Green Valley Ranch, a resort spa and casino in Las Vegas, NAMB President Kevin Ezell told 12 executive committee members and 15 staff members who were present that “a one year notice for termination” was sent “at the beginning of December [2014]” and that the action was taken “in the hopes of restoration.”

However, McRaney’s attorneys described this “disciplinal process” in terms of strong-arming the state convention to terminate McRaney. They conceded the “BCMD made the final decision to terminate Plaintiff as its Executive Director,” but claimed the “decision was heavily influenced by NAMB’s tortious conduct.”  As evidence, they cited an email to Ezell from a NAMB vice president that was dated June 9, 2015, one day after McRaney had been terminated, which noted his intention to restore the previous plan with the BCMD “100% … based on the resignation of Will McRaney, and moving forward.”

McRaney’s attorneys also revealed sworn statements from Scott Thomas, president of the Safari Christian Business Alliance, a faith-based networking, media and education company headquartered in New Mexico, and Jimmy Crosby, president of the Jacksonville Baptist Theological Seminary in Florida, with both stating they denied employment to McRaney because of statements attributed to NAMB.

Thomas wrote he had “lived next door to Dr. McRaney in high school and knew of his ongoing ministry.” However, he said, “the perception portrayed by NAMB among SBC leaders was that Dr. McRaney was a trouble maker with NAMB as the Executive Director of Maryland/Delaware Baptists Convention.”

Consequently, despite describing McRaney as “the strongest person we knew for the job,” he concluded that SCBA “could not afford to upset some Southern Baptist leaders and pastors,” and so they did not hire McRaney for the “multiple six figures and up” position.

He said he learned about McRaney from “several trusted friends” and that after meeting him in person (Oct. 2016) and “talking with more trusted friends, I was impressed with his academic and ministry credentials and his wide experience in the Southern Baptist Convention serving as a tenured 11 year professor at New Orleans Baptist Theological Seminary, a leader in two State Baptist Conventions, including Florida, and a catalytic and strategic thinker.”

Crosby added that he “quickly began considering ways to incorporate Dr. McRaney into the life of JBTS in several leadership roles.” However, he reconsidered making an offer to McRaney because of “fear of damage to JBTS and backlash from some SBC leaders” after he had learned “from SBC leaders in Florida that NAMB leadership was not pleased with Dr. McRaney.”

Checking PACER, the official service which provides electronic public access to federal court records, NAMB has not responded to the new assertions by McRaney’s attorneys. However, the PACER files show both parties submitted a joint motion to continue, Nov. 10, to move the trial date “after June 10, 2023,” allowing more time for the discovery phase of the trial, in part, because “there remain approximately 10 depositions to be taken.” The 2023 SBC Annual Meeting is scheduled to convene in New Orleans, Louisiana, June 13-14.