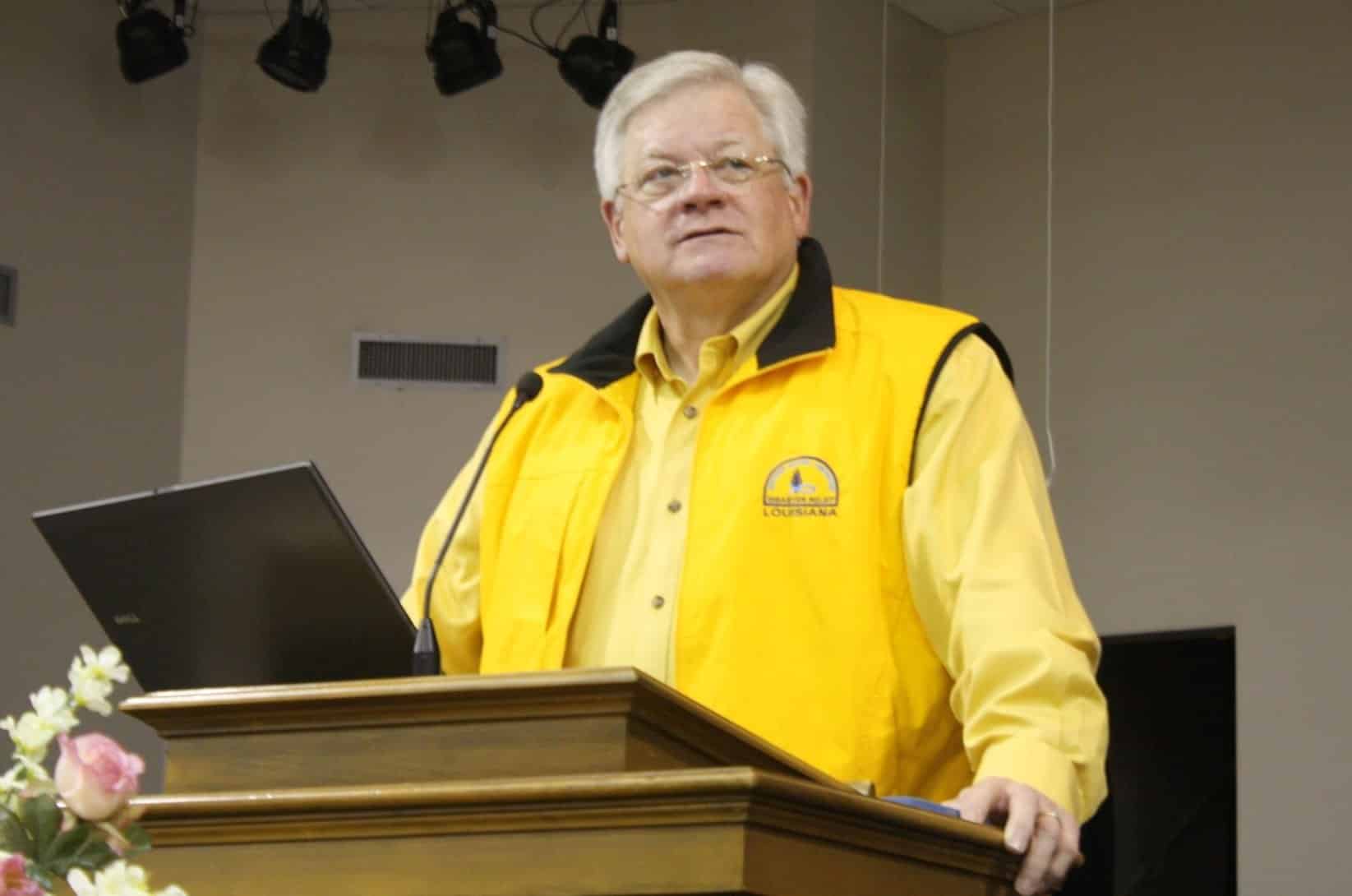 Gibbie McMillan, who retired April 30 as Louisiana Baptist men’s ministry and disaster relief strategist, was remembered by those closest to him as a warrior in the faith who had a passion to see others come to Christ and grow deeper in their spiritual walk. Submitted photo

ALEXANDRIA, La. (LBM) – Gibbie McMillan, who served at the forefront of Louisiana Baptists’ disaster relief responses and men’s ministries for 15 years, died Tuesday, Aug. 17. He was 68.

McMillan, who retired April 30 as a strategist in these two areas with the Louisiana Baptist Convention, was remembered by those closest to him as a warrior in the faith who had a passion to see others come to Christ and grow deeper in their spiritual walks.

In a joint statement on McMillan’s Facebook page, his wife, Katera, and two children, Rachel and Rebekah, expressed appreciation for the prayers and support they had received during McMillan’s extended hospitalization with COVID-19:

“To God be the glory! On August 17, 2021, at 1:49 p.m. Gibbie McMillan went to be with the Lord! We do not grieve without hope knowing that because of his salvation through Jesus Christ he will spend eternity in heaven.

“Many of you have been so faithful to pray for healing and comfort. We so appreciate those prayers and know they have been answered! The Lord saw fit in His perfect will to heal Gibbie in Heaven rather than here on earth.”

“Our hearts are broken at the passing of our brother in Christ, Gibbie McMillan,” Horn told the Baptist Message. “We were talking in the office this morning of how Gibbie never ‘got over’ being saved. He rejoiced daily in his salvation the way all of us should. We mourn his passing, we are heartbroken for his wife, Katera, and his other family members, but rejoice that God saved Gibbie and that he now spends all of eternity worshipping at the feet of Jesus.

Louisiana Baptist missions and ministries team director John Hebert said McMillan had a pastor’s heart who cared about others, especially those in a disaster.

“He was not just a co-worker, but he was a real friend to me and to all of the missions team personnel,” Hebert said. “Gibbie loved the Lord Jesus and had a tremendous testimony of what the Lord did in His life. He loved to see people have that same experience. I’m not only going to miss him as a co-worker and a friend but as a fellow servant in the Gospel.”

Stan Statham, who replaced McMillan as Louisiana Baptist men’s ministry and disaster relief strategist, May 1, said McMillan was a mentor who helped prepare him for assuming these roles.

“Gibbie cared greatly for people who were suffering,” Statham said. “One of his gifts was mentoring younger DR volunteers and seeing them grow. I wouldn’t be where I am today without Gibbie. He invested in me for many years and not just in DR work. He loved the Lord, loved the Church and loved to see people served. He literally touched thousands of people, including a lot of DR people.”

A native of Kentwood, McMillan became a Christian when he was 20 years old and, shortly afterward felt a call to ministry. He pastored churches in Arkansas, Louisiana, Mississippi and Texas during the next 28 years, and he also served for three years as a prison chaplain with the Louisiana Department of Corrections.

Before joining the Louisiana Baptist missions and ministry team, McMillan served with the Southern Baptists of Texas Convention in minister-church relations and led that state convention’s hurricane recovery ministry to churches and pastors after Hurricane Rita devastated portions of southeast Texas in 2005.

While in Louisiana, McMillan coordinated 48 responses in the state during his 15-year tenure with Louisiana Baptists. Those responses included twin flooding disasters in 2016 that left north Louisiana under more than 3 feet of rain (March) and 31 inches of rain over a two-day period in south Louisiana (August); Hurricanes Delta, Laura and Zeta (2020); and multiple tornadoes throughout the years.

Outside the state, McMillan was involved with multiple disaster recovery efforts, such as rebuilding St. Matthews Baptist Church in the Bahamas that was flattened by Hurricane Dorian in 2019.

McMillan, in 2018, reorganized LBDR into seven zones to allow for a more organized disaster response.

McMillan also supervised the state’s Royal Ambassadors program, a Southern Baptist mission education organization for boys in grades 1-6. In the year prior to the COVID-19 pandemic, Louisiana Baptists formed 21 new RA chapters, placing it among the fastest growing state RA programs in the SBC.

Most recently, McMillan was pastor of Taylor Creek Baptist Church in Kentwood.

Family and friends will remember McMillan’s Kingdom impact with a service Saturday, Aug. 21, noon at New Zion Baptist Church in Kentwood. Visitation is scheduled at the church from 9 a.m. to noon, and all in attendance are requested to wear a mask.

In lieu of flowers, McMillan’s family has requested donations be sent to the Louisiana Baptist Disaster Relief by clicking here.

Any tool can be misused. A hammer can construct or kill. An electrical wire can give instant light or, if mishandled, bring sudden death. … END_OF_DOCUMENT_TOKEN_TO_BE_REPLACED