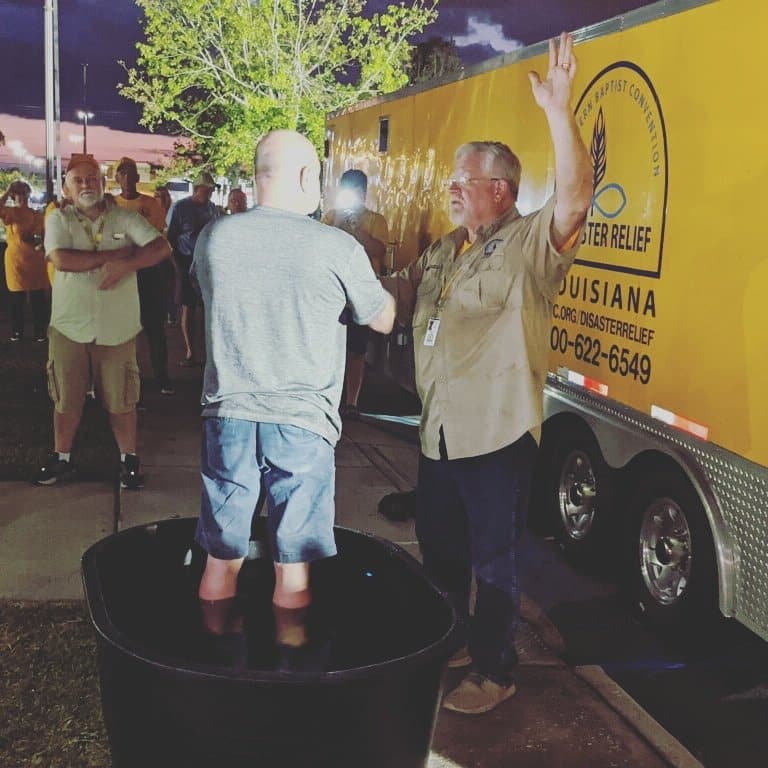 Gibbie McMillan baptizes Len Miller, a truck driver who delivered tank loads of clean water to the staging site at Trinity Baptist Church in Lake Charles. Instead of returning home immediately to Wauchula, Florida, Miller felt compelled to remain at the church and assist with relief efforts for the next four weeks. Submitted photo

ALEXANDRIA, La. (LBM) – For the last 15 years, Gibbie McMillan has been the face of Louisiana Baptist Disaster Relief, serving on the frontlines of LBDR-led responses that helped rebuild homes, and, also, offered the hope found in Christ to thousands impacted by floods, hurricanes, and tornadoes.

McMillan is set to retire, April 30, as men’s ministry and disaster relief strategist for Louisiana Baptists. But he will continue to pursue his passion for disaster relief as the leader of a newly formed chainsaw team affiliated with Two Rivers Baptist Association.

“Working for Louisiana Baptists has been one of the most rewarding opportunities I have ever had,” McMillan told the Baptist Message. “Being the hands and feet of Jesus enabled me to meet needs because of the generous giving of the churches of Louisiana. Our Georgia Barnett State Missions offering each year provided the funds needed for a quick response in times of disaster. Not every church in Louisiana is involved in disaster relief — but they can be when they support the Georgia Barnett State Missions offering.”

Stan Statham will succeed McMillan, May 1. He currently serves as associational missions strategist for Baptist Associations of Southeast Louisiana, which includes Two Rivers and two other Baptist associations.

McMillan, a native of Kentwood, became a Christian when he was 20 years old. The death of a cousin prompted him to examine his own spiritual condition; subsequently, Steve Brown, who at the time was pastor of New Zion Baptist Church in Kentwood, shared the Gospel with him.

After his conversion, McMillan was discipled by Brown, who equipped him with the tools necessary to share his testimony with a Gospel message during a service six weeks later. McMillan, who before the start of the service asked God to confirm a call to ministry, issued an invitation at the end of his sermon and saw 14 people come forward to accept Christ.

Over the next 28 years, McMillan continued to see God move through pastorates in Louisiana, Mississippi, Arkansas, and Texas, and for nearly three years as a prison chaplain with the Louisiana Department of Corrections. He also led the Southern Baptists of Texas Convention’s hurricane recovery ministry to churches and pastors after Hurricane Rita devastated portions of southeast Texas in 2005. As a member of the convention’s minister-church relations office, he coordinated recovery efforts and distribution of disaster relief funds in New Orleans and the surrounding area for the SBTC.

McMillan has coordinated 48 responses in the state since he assumed his role with the Louisiana Baptist missions and ministry team on March 16, 2006. Those responses have included twin flooding disasters in 2016 that left north Louisiana under more than 3 feet of rain (March) and 31 inches of rain over a two-day period in south Louisiana (August); Hurricanes Delta and Laura (2020); and multiple tornadoes throughout the years.

Outside the state, McMillan has been involved with multiple efforts, such as rebuilding St. Matthews Baptist Church in the Bahamas that was flattened by Hurricane Dorian in 2019.

McMillan, in 2018, reorganized LBDR into seven zones to allow for a more organized disaster response.
McMillan also supervised the state’s Royal Ambassadors program, a Southern Baptist mission education organization for boys in grades 1-6. Young boys are taught to deepen their love for missions through RA programs at their respective churches as well as group events such as the RA Congress, Survivor Man and Camp-O-Ree. In the year prior to the COVID-19 pandemic, Louisiana Baptists formed 21 new RA chapters, placing it among the fastest growing state RA programs in the SBC.

Among the most memorable moments over the last 15 years was the opportunity to baptize Len Miller, a truck driver who delivered tank loads of clean water to the staging site at Trinity Baptist Church in Lake Charles. Instead of returning home immediately to Wauchula, Florida, Miller felt compelled to remain at the church and assist with relief efforts for the next four weeks.

Throughout the course of his time there, Miller developed a relationship with disaster relief volunteers, and having accepted Christ 10 years prior, was convicted of his need to be obedient in publicly sharing his faith through believer’s baptism. On Sept. 25 in a cattle trough that relief volunteers used to wash equipment, Len Miller was baptized, given a study Bible, and instructed on how to grow in Christ.

Miller was among 1,428 people with whom disaster relief chaplains shared the Gospel from late August until September 27 in areas of Louisiana impacted by Laura. Of those who heard the Good News, 300 turned to Christ. Disaster relief volunteers also distributed 1,955 Bibles.

“That baptism seems to bring it to a high point of why we do disaster relief and how we make a difference in people’s life with sharing the Gospel,” McMillan said. “I have seen people respond as a volunteer and during a times of debrief people would realize God was dealing with them in their own heart.”

McMillian is grateful for the many volunteers who showed up year after year to serve in areas devastated by disasters; and, also, is appreciative of Louisiana Baptists who have given faithfully to the Georgia Barnette State Missions Offering that supports disaster relief efforts.

“Because we generally have more disasters in our state than others, we have had a greater support of the churches and church leaders from across the state,” he said. “This is not a one person deal here. It is the Louisiana Baptist family that makes a difference.

“The Georgia Barnette Offering is the backbone of disaster relief because if it were not for that offering and the individuals that give, we would not be able to respond and do the work and have the training sessions that we do,” he said. “If you want to see a clear picture of what the Cooperative Program is, look at disaster relief. It affects every aspect of church life. We reach people with Gospel when they are hurting, we feed them when they are hungry, and we offer showers when they don’t have water or power.

“Jesus Himself said when you do it to least of these my brethren you did it to me,” he added. “We become hands and feet of Jesus as we respond. We let them know Jesus is the reasons we do this. It’s not for our glory but for His.”

“Disasters, by nature, are fuel for frayed emotions,” Horn said. “At the same time, we have also learned that times of disaster are seasons of high Gospel impact. Brother Gibbie McMillan has been a faithful servant of the Lord in a stressful, highly emotional, and at times most difficult part of our work as Louisiana Baptists. Gibbie is an evangelist at heart, and we are thankful for that.

“I know Gibbie’s retirement from our specific ministry is not retirement from ministry, but a redeployment,” he continued. “We pray that God gives Gibbie continued opportunity and good health to be a minister of the Gospel and maximize Gospel impact.”

Statham said he hopes to build upon McMillan’s many contributions.

For the last 10 years, Statham has served as an associational missions strategist to churches in the Baptist Associations of Southeast Louisiana. Before then, Statham was a paramedic in Atlanta, Ga., and then senior pastor at Trinity Baptist Church, Franklinton. Also, in 2010, while a student at New Orleans Baptist Theological Seminary, he completed a doctoral project to help churches prepare for natural disasters.

“I’m grateful for the faithful service of Brother Gibbie,” Statham said. “He has served the Lord and Louisiana Baptists with great commitment.

“I believe my years working as a paramedic before coming to Louisiana and serving as a pastor and director of missions has prepared me for this next ministry,” Statham said. “I’m grateful for the opportunity to serve Louisiana Baptists in this important ministry.”

“With his guidance we have created regions, increased the number of volunteers that are trained and respond to disasters, increased the size of our fleet and improved the quality and organization of our response,” Hebert said.

“He has trained, encouraged, and assisted volunteers as well as been a huge encouragement to victims of disasters with un-tiring efforts. Dr. McMillan has shared Jesus with countless people and his work has facilitated the sharing of Christ with thousands. As he moves into retirement, I know he will continue pursuing the same purpose, on a different stage.”

“His experience as a pastor, associational missionary and long-term involvement in disaster relief has prepared him to lead,” he said. “He is widely respected by Louisiana volunteers as well and leaders in disaster relief from across the country.”