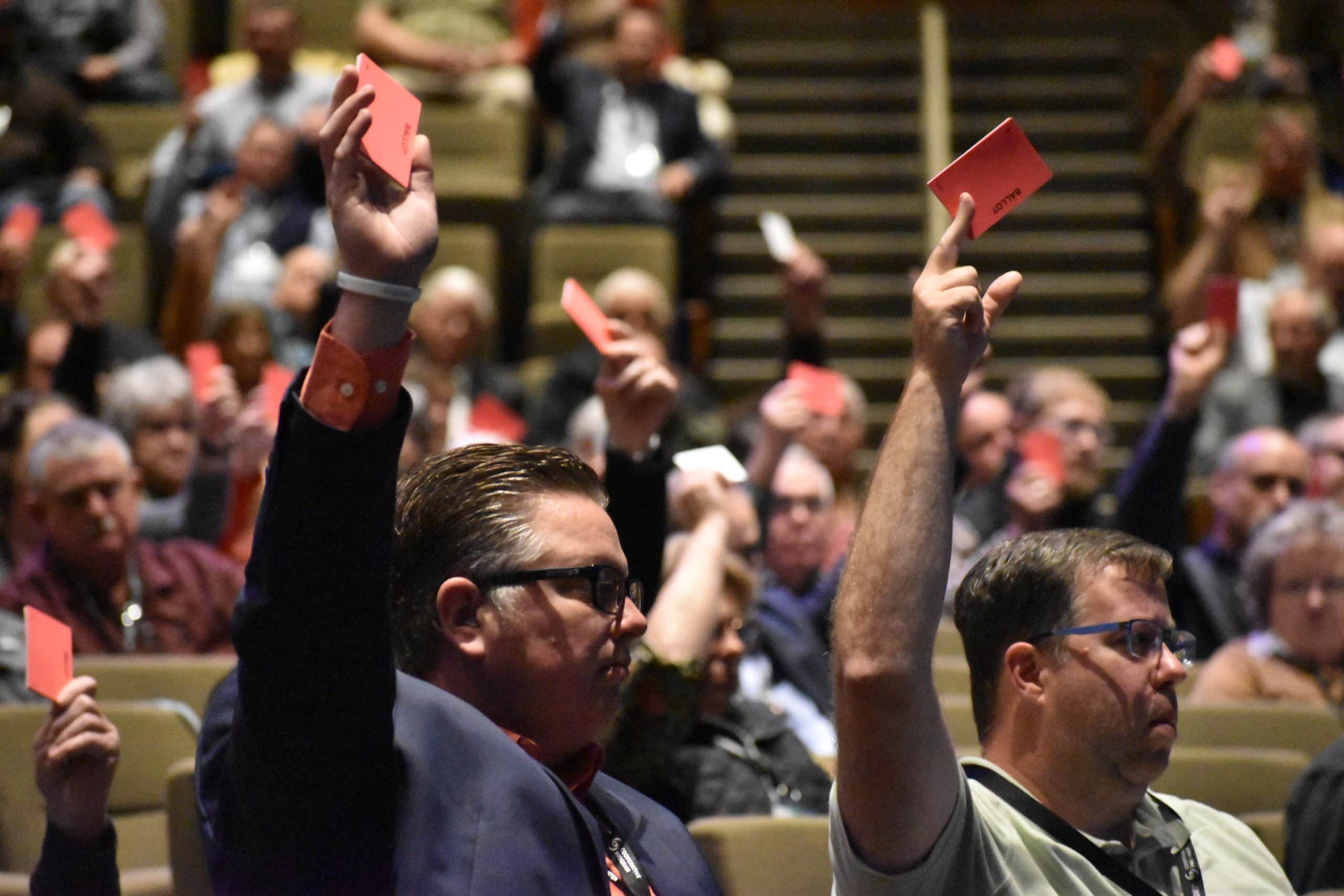 Messengers vote for a motion that broadens the definition of a cooperating church with the Louisiana Baptist Convention, Nov. 15, 2022. Brian Blackwell photo

Previously a church was required to support Southern Baptist causes to be considered “in friendly cooperation” with the LBC.

Louisiana Baptist Executive Director Steve Horn, also speaking as a messenger from Calvary Baptist Church, Alexandria, noted he was in favor of the change. Horn said the change is not about redefining the Cooperative Program.

“The Cooperative Program is not Louisiana Baptists’ definition,” he said. “It is the Southern Baptist Convention’s definition. So, we could not change the definition of the Cooperative Program. We are not seeking to do that with this particular article change. We are merely seeking to keep engaged the churches that have already made the decision and asked us not to send their gifts, through to us, to the Southern Baptist Convention.”

Horn said the move is not anti-SBC or anti-CP, but “a conviction that if somebody is giving to Louisiana Baptist Convention causes, they at least ought to be seated as messengers as we continue to keep them engaged” in the LBC.

In addition to keeping them engaged with the LBC, he said the LBC also will be encouraging them “to support Southern Baptist causes.”

Michael Linton, a messenger and pastor of First Baptist Church, Sulphur, spoke against the change.

Shad Tibbs, a messenger and pastor of Fellowship Baptist Church, Trout, then spoke in favor of the change.

“I do understand what the brother is saying,” he said. “Unfortunately, in the time we live in and because some things that are taking place in the Southern Baptist Convention, my church and many more can’t support what is going on,” he said. “Therefore, if this change is not made, we can no longer be a part of Louisiana Baptists — and we want to continue to support what Louisiana Baptists are doing. Our hope is that in the future we can support the Southern Baptist Convention again. So, I speak in favor of this to allow us to continue to support the work of Louisiana Baptists.”

— Meanwhile, Baptist Press, a division of the communications department of the SBC Executive Committee, has noted that “North Carolina, Wyoming and Oklahoma periodically forward church gifts to the [SBC] EC with some type of designation or restriction.”

The backlash against the SBC appears to be related to a number of developments at the national level, including: the SBC Executive Committee’s hiring of a pro-gay law firm, Bradley of Nashville, and the SBC Sexual Abuse Task Force’s hiring of the pro-gay Guidepost Solutions, both in response to SBC messengers asking for an investigation of the alleged mishandling of sexual abuse accusations; the SBC EC’s waiver of attorney-client privilege and the subsequent departure of the SBC’s long-standing law firm; the abrupt departure of Ronnie Floyd as SBC EC president and CEO; and the SBC Credential Committee’s non-decision at the 2022 SBC Annual Meeting on the issue of ordained women pastors.

Twenty-seven of about 1,600 Louisiana Baptist congregations have instructed that their cooperative missions and ministries contributions are to be used only in the state with none of their gifts to be forwarded to the Southern Baptist Convention.

The LBC Executive Board addressed the issue during a Sept. 27 meeting, adopting the now-approved amendment to the Louisiana Baptist Convention Articles of Incorporation. During the discussion then, Horn said this move would strive to “strike that balance of honoring their requests while at the same time continuing to promote the ideal that we are better together with our Southern Baptist partners.”

By JT Waresak I'm not a huge New Year's resolution guy. However, as a new year begins, it is another opportunity to raise the bar in my effort to be the best dad I can be. I'm also reminded that the opportune time to pour into my sons and daughters is limited to a couple of precious decades. This is not to say … END_OF_DOCUMENT_TOKEN_TO_BE_REPLACED