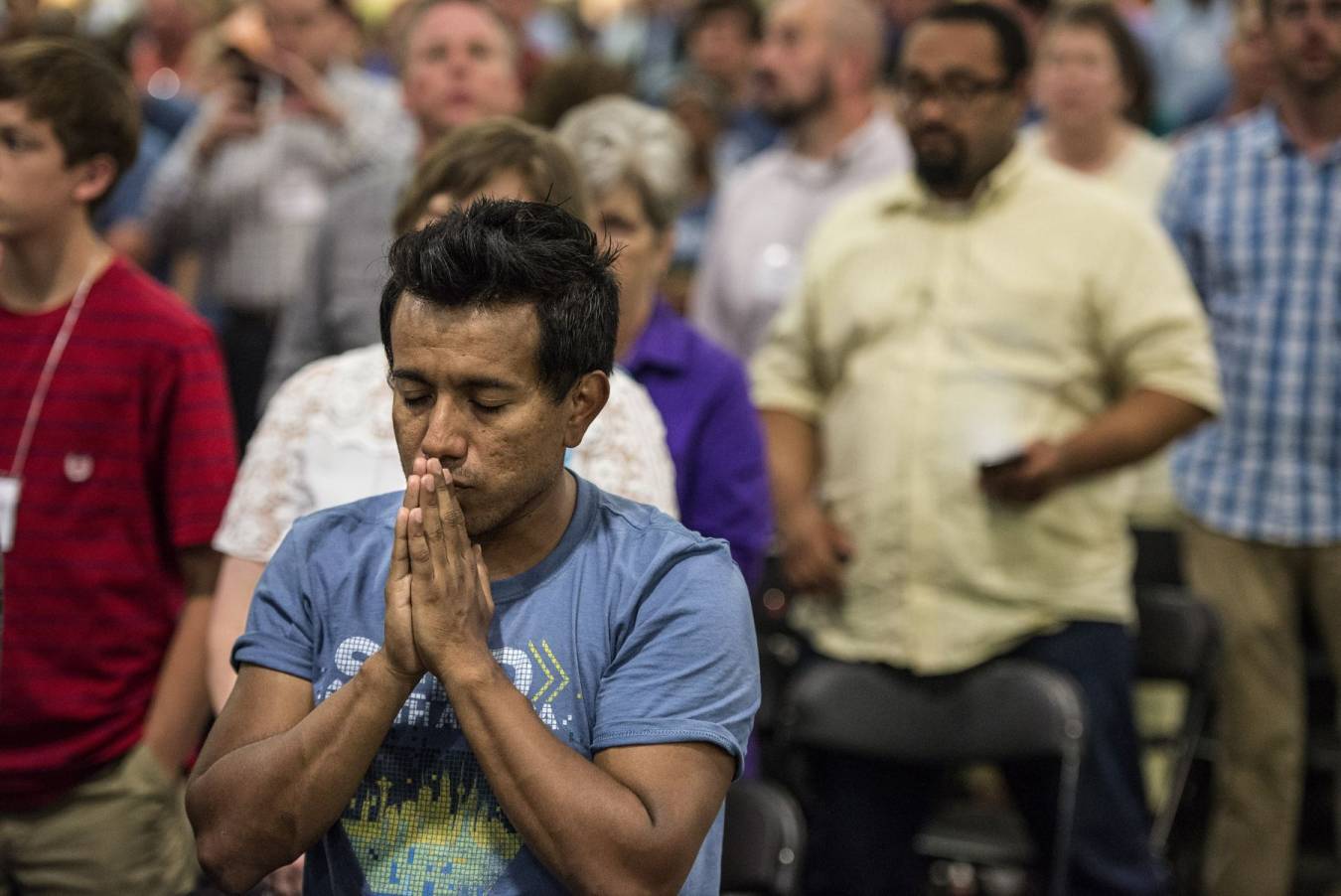 COLUMBUS, Ohio (BP) — Thousands of messengers at the 2015 Southern Baptist Convention knelt in prayer and raised their hands to heaven July 16 as they prayed for revival in the church and a great awakening across the United States. Spiritual leaders from Southern Baptist churches across America — including Hispanic, Korean, Native American and African American pastors — prayed for an end to racism and prejudice as they pledged to work together “as one family.”

The SBC’s National Call to Prayer included participants around the world, connected by broadcasts from the Daystar worldwide television network and the Salem satellite radio network, as well as a live stream on the Internet. 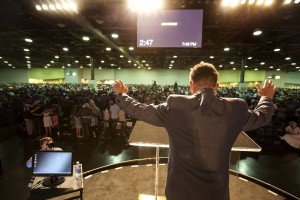 Ronnie Floyd, president of the Southern Baptist Convention, leads small groups of messengers at the SBC annual meeting June 16 to “repent of all racism and all prejudice.” Floyd called on all Southern Baptists to pray for the next Great Awakening during the evening session at the Greater Columbus Convention Center in Columbus, Ohio. Photo by Matt Miller

“The only thing that can ultimately reshape America is a spiritual awakening and a great movement by God,” Ronnie Floyd, president of the SBC, told messengers. “There has been no great movement by God without extraordinary prayer. When was the last time you gathered thousands of people on a Tuesday evening and prayed for spiritual awakening across the United States? We have full confidence in what God can do.”

Floyd, alongside other pastors on stage throughout the evening, said he had participated in prayer a few days ago with a group of spiritual leaders in Ohio’s capitol building. Underneath the seal of the state of Ohio that appears in front of the building are the words “With God, all things are possible,” he noted.

“It is providential we are here, because with God all things are possible,” he said. “We pray that tonight will become a generational moment. Lord, open up the heavens and come down.”

“God is calling us to brokenness and humility,” he said. “The greatest sin is pride.”

Citing Nehemiah, who prayed for his own city when the walls were in ruins and the city was left unprotected, Graham said that is the spiritual condition of the U.S., “God’s people are without protection.”

Nehemiah’s response was to pray for his nation, but to start with himself and his own family. He prayed and fasted to get right with God. Graham challenged Southern Baptists to pray in brokenness, humility and repentance. 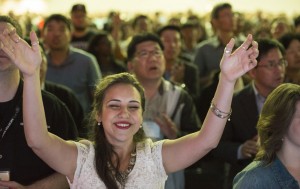 Messengers at the 2015 Southern Baptist Convention annual meeting worship together in between small group and corporate prayer time during the June 16 evening session dedicated to prayer at the Greater Columbus Convention Center. Photo by Paul W. Lee

Surrounded by others of Asian descent, Paul Kim, pastor emeritus of Antioch Baptist Church in Cambridge, Mass., said Asian American churches join him in “racial reconciliation and healing in our land.” Recalling the Haystack Prayer Meeting in the 19th Century that launched a great awakening, he asked, “Why can we not experience a new spiritual awakening today? What we do here can lead the entire nation.”

With 2.1 billion people who have never heard about salvation, J.D. Greear, pastor of The Summit Church in Raleigh-Durham, N.C., sought to personalize the number, reminding Southern Baptists they are “people like us.” But without Christ, they will suffer eternal death.

Reading Psalm 126:4, he urged Southern Baptists to reach the world through the hard work of evangelism, prayer and patience, “yearning for the heavens to open up” to send a spiritual awakening.

Don’t always look back at what God has done, Greear said. He not only “moved yesterday, but is a God of today and tomorrow.”

Ken Whitten, pastor of Idlewild Baptist Church in Lutz, Fla., noted a litany of sins he sees being committed by Southern Baptists, including — among others — skepticism, distrust and a lack of urgency to reach the world with the Gospel message of Jesus Christ.

K. Marshall Williams, pastor of Nazarene Baptist Church in Philadelphia, was the first of several to pray for racial reconciliation.”What if God heard us tonight confess our sins?” Whitten asked. “What if God said, ‘I will bring a spiritual awakening? What if a discipleship movement took place across the world?”

“The Bible calls us to be in unity,” Williams exhorted prayer meeting participants. “It’s skin; not sin. Come together. Stand up and be the people of God. Rise up!” His next words were drowned out by the applause of the crowd.

In the call for racial reconciliation, Ted Traylor, pastor Olive Baptist Church, Pensacola, Fla., said some of the same people in his church who taught him as a boy to sing “Red and yellow, black and white, they are precious in his sight,” left the worship service when a black man came to their church.

Indicating the men he was standing with on stage, Traylor said, “We’re the white guys in the crowd.” He commented that much had been given to them as a racial class in America and God expected much in return.

Borrowing from A.W. Tozer, James Merritt, pastor of Cross Pointe Church in Duluth, Ga., said too many American churches are so busy doing church that if the Holy Spirit left their fellowship they would not realize it.

Christians today, he admonished, are not too different than the Pharisees and Sadducees that Jesus condemns in Scripture. He described Jesus’ words against them as one of the most “damning rebukes” because they misinterpreted Scripture and failed to believe in the power of God.

He said Christians need God’s power to work in them, witness through them and walk before them.

Vance Pitman, pastor of Hope Church, Las Vegas, Nev., said, “I have read about revival. I have heard about revival.” He cited the great revivals in America and Wales and the conversion of new believers in China and Iran. Pitman’s voice cracked with emotion when he said, “But I have never experienced that kind of awakening where I live.”

Pitman said he was not content just to read about the outpouring of the Holy Spirit but wanted the nation to experience it like never before. And the reason for God’s lack of activity in the church is not due to the lostness of the nation, but “the lack of desperation of the people of God.”

“Even for Peter, there was deep prejudice in his life,” Galvan said.

He admitted to making the same mistake himself, just like many in the church.

Timmy Chavis, senior pastor of Bear Swamp Baptist Church in Pembroke, N.C., and a Native American, said, “I am so glad that God has brought our convention together to be the spearhead of not just a national effort, but a global effort to let all people know that we stand together as God’s people, and that we have all been redeemed by the blood of the Lamb. We have one Father, there is one Lord, we’re going to one Heaven, we have one faith and one baptism and are one people.”

Steve Gaines, senior pastor of Bellevue Baptist Church in Cordova, Tenn., called on the church to seek revival as a body. He spoke from Acts 4, when the early church prayed, sought after the Holy Spirit and then proclaimed the Gospel.

“In three centuries, these Christians conquered the world’s greatest empire [the Roman Empire],” he said. “How in the world could a group of ragtag fisherman, tax collectors, zealots and commoners turn their world upside down in such a short time? They had a holy fire burning in their souls that could not be extinguished.”

Robert Wilson, pastor of Light of the Word Church in Atlanta, said his prayer was that there be real unity.

“We’re not about just trying to be segmented, but we want to ask God to take our hearts and really meld them together, so that when the world sees us as Southern Baptists — black, white, red, yellow, brown — they see us as one.”

Floyd reminded participants that revival across America must begin with churches.

“Now is the time the world can see what God can do,” he said. “The heart of God is for His people to walk in light. That’s why the church needs revival. It’s time for revival in the church.”