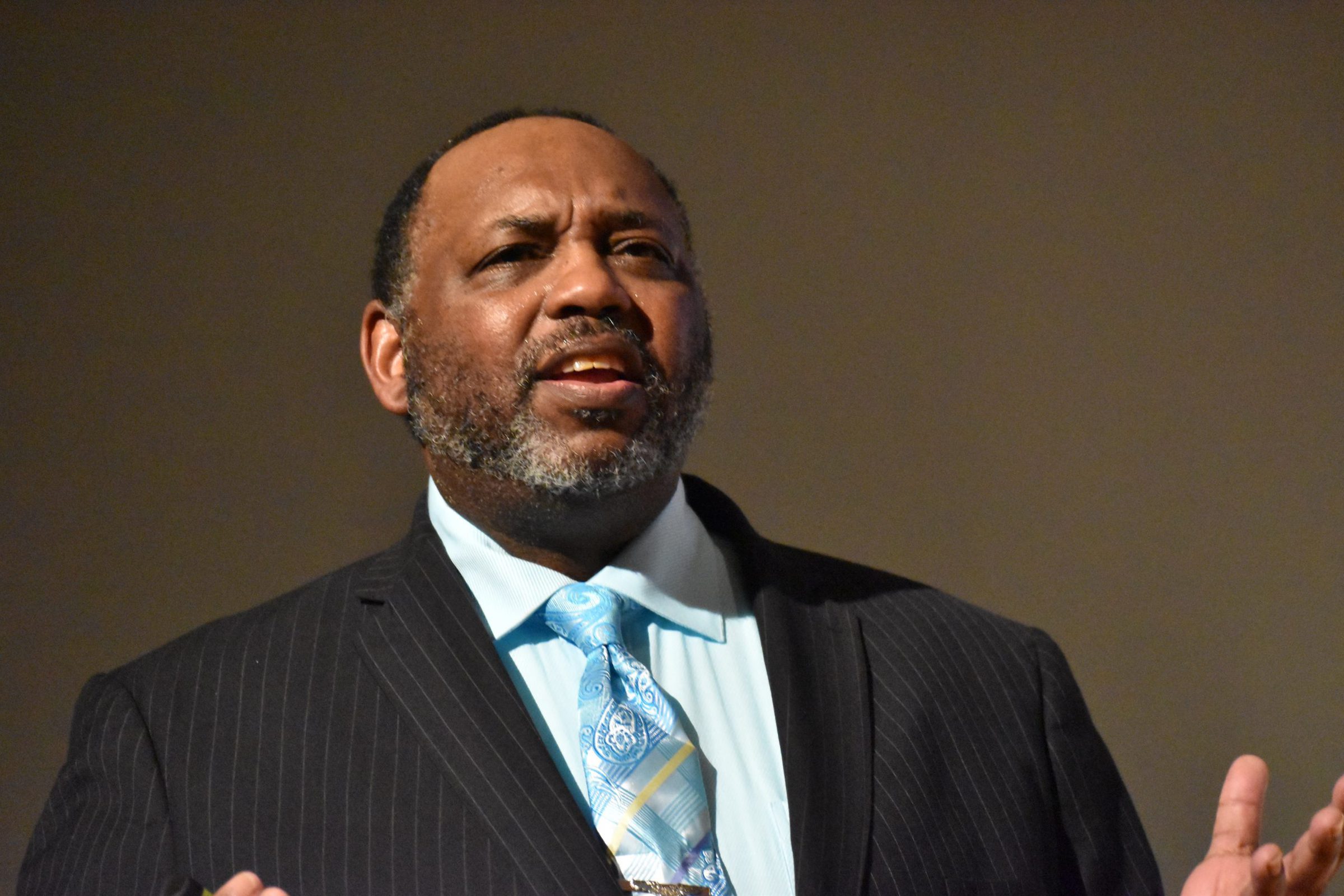 Craig Mitchell, president of the Ethics and Political Economy Center, an evangelical think tank based in Dallas, Texas, during an event at Louisiana College described Critical Race Theory and Intersectionality as emerging from Marxist thought, which as its primary tenet declares that there is no God. Brian Blackwell photo

Kevin Jones of Southern Seminary is the co-editor of “Removing the stain of racism in the SBC,” with Jarvis Williams, also of SBTS.

In the original version of this article, Kevin Smith was wrongly identified with this book. I apologize to Dr. Smith for the error and for any negative impacts resulting from this misidentification.

PINEVILLE, La. (LBM) — Speaking to Louisiana College students as part of a “Christ, Church, and Culture” series about current cultural issues  from a biblical perspective, a national speaker on ethics explained the controversial concepts of Critical Race Theory and Intersectionality, and expressed worries that these Marxist ideologies have gained footholds among the faculty of the Southern Baptist Theological Seminary in Louisville, Kentucky, and the Southeastern Baptist Theological Seminary in Wake Forest, North Carolina.

Craig Mitchell, president of the Ethics and Political Economy Center, an evangelical think tank based in Dallas, Texas, described Critical Race Theory and Intersectionality as emerging from Marxist thought, which as its primary tenet declares that there is no God. He added that these two concepts also developed within the framework of different branches of thought that inform the Social Justice movement. But, ultimately, both of these concepts present a perspective that there is conflict between “an oppressor” and “an oppressed” and that the oppressor cannot know right or morality.

Consequently, Critical Race Theory perpetuates the notion that white people cannot know right and cannot be moral. Likewise, Intersectionality, which was shaped fundamentally by black feminist lesbians, declares that a man cannot know truth or the moral thing to do.

“Is there injustice in society,” Mitchell rhetorically asked.

“There is,” he said, “because we live in a sinful, fallen world, and the best that this world has to offer is still pretty messed up.

Mitchell said justice and righteousness cannot be obtained through either “big” or “little” government. Instead, both will be restored by Jesus Christ “not right now, but in His timing.”

After his presentation, students asked questions, including a number about the controversial Resolution 9 passed by messengers at the 2019 Southern Baptist Convention Annual Meeting, and, about the presence of Critical Race Theory and Intersectionality on SBC seminary campuses.

Responding to the description in the resolution calling Critical Race Theory and Intersectionality “useful analytical tools,” Mitchell said this is true only “if you’re a Marxist.” He added that “There’s nobody I know at Southwestern who’s actually teaching Critical Race Theory and nobody who’s actually teaching Intersectionality.” 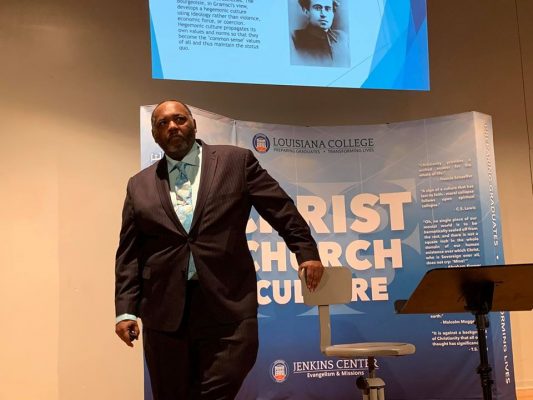 “I know a bunch of people at New Orleans, and I don’t know of anyone who’s actually teaching that,” Mitchell said. “I’ve known Jamie [Dew, NOBTS president] for years. I don’t think Jamie would go for that. But then I never imagined that Danny Akin [SEBTS president] or Al Mohler [SBTS president] would support this type of thing.”

Mitchell explained that these Marxist ideas are being cultivated on the campuses of SEBTS and SBTS.

“Walter Strickland teaches Critical Race Theory, and you look at black theology and some of the things he has said. Frankly, I am surprised he is still on the [Southeastern] faculty,” Mitchell remarked. “From Southern Baptist Theological Seminary, Louisville, Kentucky, you have Curtis Woods [chairman of the 2019 SBC Resolutions Committee] and you have Jarvis Williams. Jarvis Williams is a New Testament professor. From all accounts Jarvis in his courses doesn’t really teach New Testament, he just teaches Critical Race Theory.

“You have Kevin Jones,” he added. “Kevin is also at Southern.

“When I was still teaching at Criswell College, Kevin ended up being editor of this book called ‘Removing the stain of racism in the SBC,'” he explained. “I got an article they asked me to write on ethics about the state of racism in the SBC. What I did not realize was that some of the writers would have some of the views that they had.

“Southern and Southeastern — those are places where it’s most problematic.”

Closing out the question and answer time, Mitchell told the students, faculty and visitors that the only thing Critical Race Theory and Intersectionality produce is “a Marxist direction.”

“In Resolution 9 they said that Critical Race Theory is a ‘useful analytical tool,’” he said. “It is not a useful tool to get people saved – I can tell you that.”

Messengers at the 2019 Tennessee Baptist Convention Annual Meeting passed a resolution against Critical Race Theory and Intersectionality as a response to the SBC resolution. Additionally, pastors in Georgia and Louisiana have indicated they are going to push during the 2020 SBC Annual Meeting in Orlando, Florida, June 9-10, for a retraction of Resolution 9 or to pass a replacement resolution that condemns the two controversial Marxist theories.

By Steve Horn, Louisiana Baptists executive director Jesus reminds us that we should always pray and never give up (Luke 18:1). Today’s ruling from the Supreme Court serves as a good reminder of that truth. For almost 50 years, American Christians from various denominational backgrounds have been praying and … END_OF_DOCUMENT_TOKEN_TO_BE_REPLACED