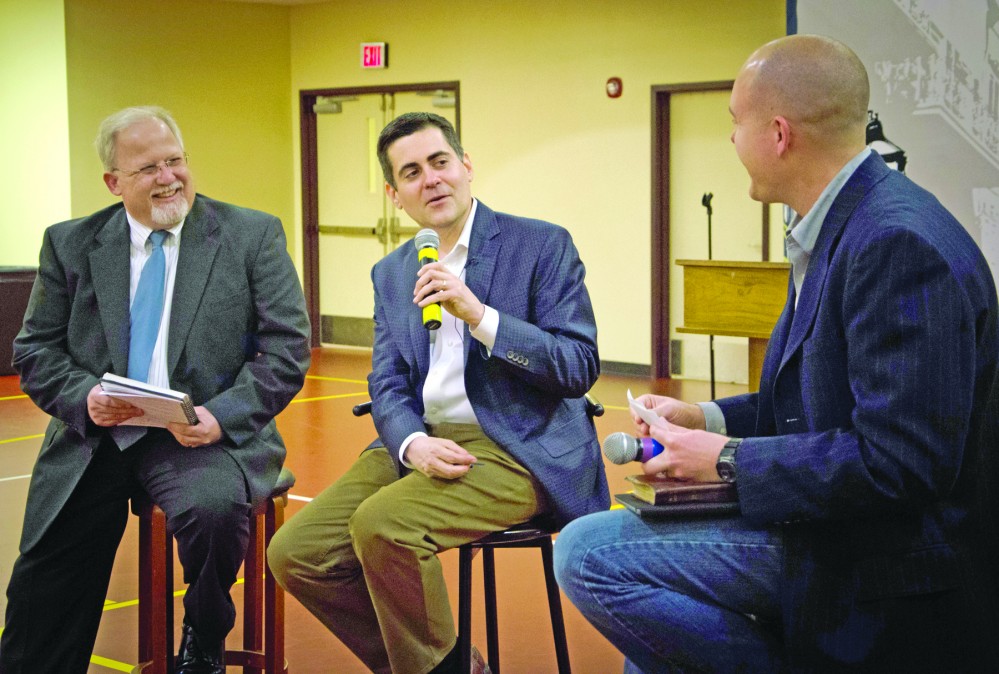 Russell Moore (center), President of the Southern Baptists Ethics and Religious Liberty Commission, answers a question during a Q&A at Franklin Avenue Baptist Church as part of a Preach the Word Conference. On the panel with Moore were (left) Jeff Riley, professor of ethics and Chairman of the Division of Theological and Historical Studies at NOBTS, and Pastor Chad Gilbert (right) of Edgewater Baptist Church in New Orleans.

NEW ORLEANS – In the turbulent wake of racial tensions from recent situations like Ferguson, Mo., Russell Moore, Ethics and Religious Liberty Commission president, said at a one-day preaching event in New Orleans that it is not enough for Christians of different races to simply get along for the sake of missions and evangelism, though both are vital.

Racial reconciliation must be a matter of spiritual warfare, Moore said.

Moore spoke at a recent Preach the Word conference, hosted by Franklin Avenue Baptist Church and presented by the New Orleans Baptist Association, on kingdom, culture, and mission, and addressed how pastors can effectively and faithfully preach the gospel in light of each.

“What Dr. Moore talked about today was incredible, it was on time, it is needed, it was convicting, but it was also inspirational,” said Fred Luter, Jr., Franklin Avenue Baptist Church pastor and former Southern Baptist Convention president. “It gave me hope that racial reconciliation is possible within the body of Christ.”

Neither achievement nor heritage is enough to bring someone into God’s kingdom, Moore told a full room of African-American, white and Latino pastors, and their wives, at a dinner concluding the event. Moore drew from Ephesians 3 to emphasize that every person, every race, is “adopted” by God’s grace through Christ.

“Because left to ourselves, we are idolators,” Moore said. “Left to ourselves we will want to identify something in and of ourselves that makes us superior to someone else, apart from the grace that comes in Jesus Christ.”

Moore told of a Sunday School teacher when he was a child whose racially inappropriate comment gave the impression of two different gospels—the gospel presented in scripture and the “gospel” as it was lived out in the racially segregated culture.

“The gospel that speaks of a kind of racial supremacy and division among the image bearers of God is a different gospel than the gospel that has been handed down by our Lord Jesus Christ,” Moore said.

Reconciliation is not easy and seeking reconciliation can cause tension, Moore said. Moore pointed to the generational divide that spawned the worship wars.

“We know how to answer that,” Moore said. “Scripture has told us that the way we get past that impasse is counting one another as more important than yourself.”

A white church providing ministries to other racial and ethnic groups is not racial reconciliation, Moore cautioned. Reconciliation happens when members of other races are placed in positions of leadership, he said.

Checkerz Williams, pastor of the racially diverse Celebration Church, River Parishes Campus, LaPlace, said Moore “hit the nail on the head” regarding churches who separate out ministries to other races.

“We think we are doing our part, when in reality we should be asking, ‘Are we opening up our congregation to receive ministry from those who are different from us?’”

The LaPlace church congregation has a strong racial mixture of African-Americans, Latinos, whites and internationals from countries such as Laos, Ethiopia, and Nicaragua. After the events of Ferguson, Mo., Williams said he emphasized to his congregation the importance of living out the Gospel with each other “lest Ferguson becomes LaPlace.”

“No matter how far we think we’ve come, if we ever let our guard down and get comfortable, we’ll go backwards,” Williams said.

Moore addressed today’s culture in a morning session and said he fully expects the Supreme Court this summer to rule same-sex marriage legal in all 50 states.

“The sexuality issues that are coming toward us are going to hit with a force that we cannot imagine,” Moore said. “If the Supreme Court rules on gay marriage based on the 14th amendment, the end result is that you are the equivalent of the KKK if you oppose it.”

Christians can wring their hands or can recognize God at work and view the shift as good news for the advancement of the kingdom, Moore said. For too long, the culture has talked the language of the Christian faith yet evaded the real questions of the Gospel, even using “faith” to advance a political, economic or cultural agenda, Moore said.

Jesus brought the social and cultural crisis to his listeners, Moore said. The church must repent from its own accommodation of the culture and for missing the culture’s real questions. As example, Moore pointed to the culture’s view of children as a hindrance to economic success as a driver of the abortion culture.

“We are going to have to be the people who are embodying a different way of living in terms of marriage and family in our own congregations. That means repenting of the ways we’ve done this poorly in the past and showcasing to the world, ‘This is what marriage defined by the gospel actually looks like.’ And that is going to seem strange and offensive,” Moore said. “So be it.”

“Everybody flinches at first when they see the light,” Moore said. “Don’t give up. Keep pressing with that in the way that you’re sending out a searchlight that is exposing the hidden recesses of the human heart but then calling people in to what saves.”