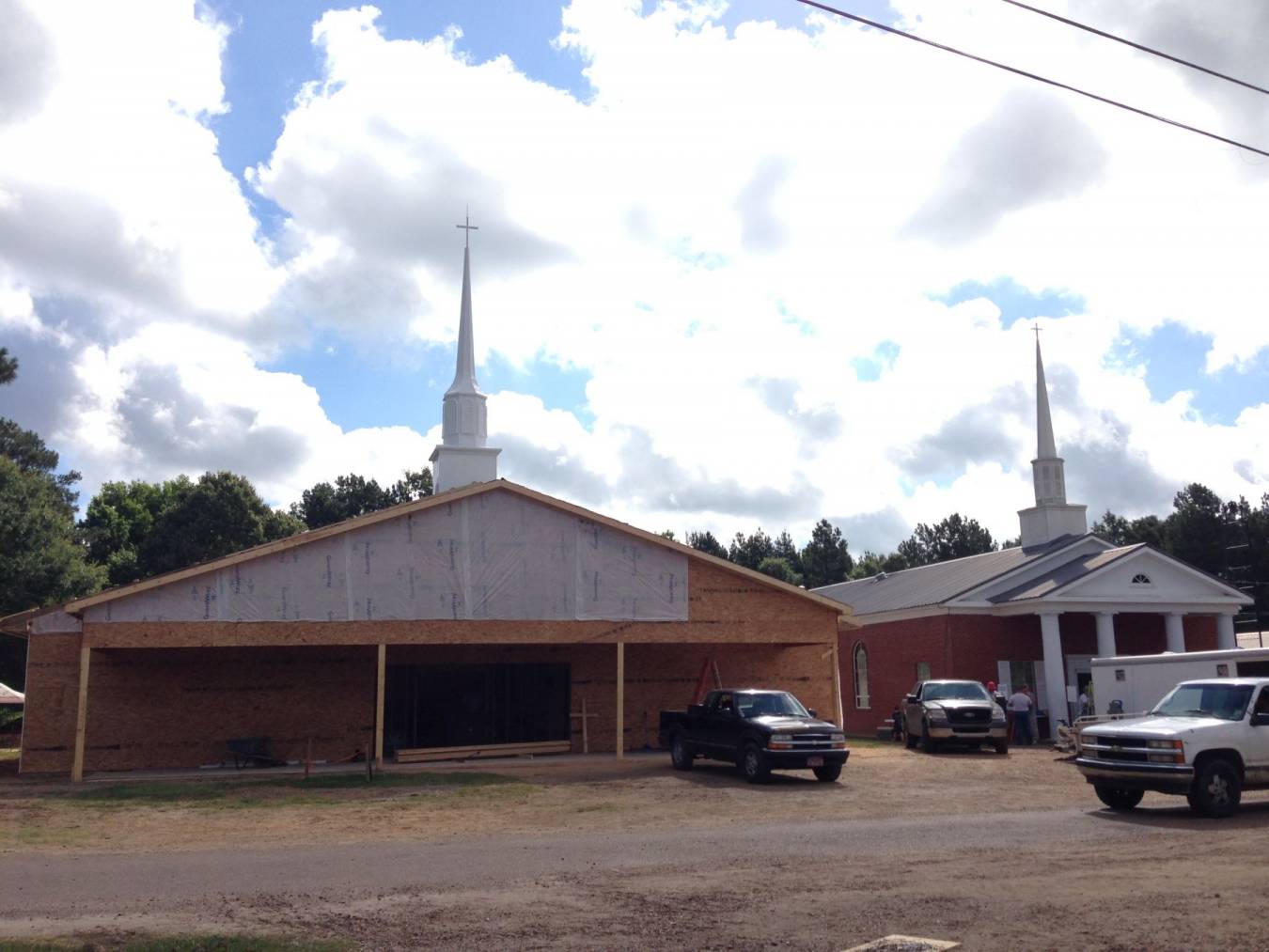 Construction on the new sanctuary for Standard Baptist Church in Olla continues as the framework and body of the building have now gone up. Photo taken by Joe Dupree

OLLA – Out with the old and in with the new. That seems to be the popular way of doing things nowadays.

For the folks at Standard Baptist Church, it was just time to replace an aging sanctuary with a larger and newer building that would house congregants comfortably.

The original church structure, which was made of wood, was built back in 1945. The current structure was built later in the 1960’s. But as time progressed, the building began deteriorating and the leaders of the church decided it was time to build a new, larger sanctuary.

“Our old building has some age issues, ” said Rodney Shelton, chairman of deacons, Standard Baptist. “Our attendance has grown. The Lord has blessed us with our attendance growing and with this building project.

“With our growth, there’s just a good chance they’ll be uncomfortable,” said Shelton.

It was about a year ago the church decided a new sanctuary was needed to accommodate the large growth in congregants.

“If you talk about the history of the building, that’s one thing,” said Shad Tibbs, pastor of Standard Baptist. “The history of this church five years ago, what I saw, is a very small group of people who were, in reality, tired of playing church and were willing to serve, doing whatever it took to allow God to move in their midst and that is a big part of what you see here today.”

Standard Baptist partnered with a couple churches, Eastern Hills Baptist Church, out of Montgomery, Ala., and Parkview Baptist, out of Lake City, Fla., to bring a group called ‘Carpenters for Christ,’ to help construct the new sanctuary.

Eastern Hills brought about 85 people while Parkview brought another 25 to help.

But that’s not the only help Standard Baptist is receiving.  First Baptist Olla, a sister church, is hosting the teams … free of charge.

“It’s been a real blessing,” said Johnnie Phillips, pastor of First Baptist Olla. “I think we got got more of a blessing than them. It’s been great to listen to their devotions each morning and interact with them. They’re just a loving bunch.”

Phillips said while his church did not have a mission trip planned this year housing these volunteers has turned out to be “a mission trip right at home.”

“They’re our sister church and we were glad to help them,” said Phillips.

“Every man here has a love for Jesus Christ and that is why we’re here,” said Mitch Marshall, project foreman for Carpenters for Christ. “We build buildings. God builds churches and we build the buildings for Him.”

“The amount of men that showed up and the work that has been done — from going from a naked slab to an exterior structure in five days — is just unreal,” said Jerry Snoddy, Standard Baptist trustee and committee chairman.

“It’s just amazing what the Lord has done,” said Snoddy.

The projected finish date of the new sanctuary is slated for Aug. 23 when the church plans to host a revival service.