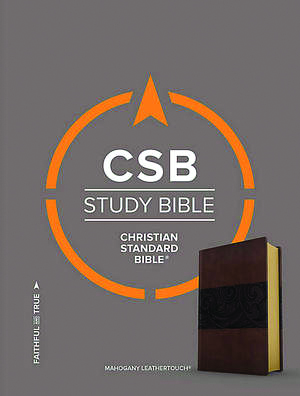 NEW ORLEANS (LBM) – A noted scholar has published a focused assessment on study notes in the newly published Christian Standard Bible (CSB), saying non-Calvinists “will be disappointed” due to the heavy Calvinistic leaning in some of its comments about passages that address salvation.

Adam Harwood, associate professor of theology with the New Orleans Baptist Theological Seminary, described the actual Bible translation as a “theologically conservative resource,” but took issue with the “theological interpretation” of some study notes provided at the bottom of pages, saying, “those who affirm that God loves every person, Christ died for every person, and God desires to save every person will be disappointed.”

LifeWay Christian Resources is the publisher of the CSB.

Trevin Wax, Bible and reference publisher for LifeWay, has distributed copies of the newest LifeWay Bible to news media with an accompanying letter calling the translation accurate and readable “without compromise” – a view Harwood does not dispute.

But Wax also lauds the study notes developed by “renowned biblical scholars from multiple denominations,” saying the notes reflect “the Bible’s original context,” something Harwood refutes with regard to interpretations of several passages about salvation.

Harwood prefaced his assessment with six notes, framing his comments as:

— “from a friendly perspective” (he calls Wax “a friend” and discloses that he has a professional relationship with LifeWay’s B&H Publishing);

— limited to “the study notes only, not the text of the Bible”;

— focused on “only one doctrine, salvation”;

— respectful of the “impressive list of theologically-conservative contributors;” and,

— careful regarding the fact that some of the study notes “were originally written for the HCSB Study Bible, published in 2010” (and he promises “to address study notes as they appear in the 2017 edition,” only).

Harwood’s “Theological Review of the CSB Study Bible Notes” at AdamHarwood.com offers an extensive examination of LifeWay’s treatment of the concept of salvation in these select passages, but the highlights below are representative of his observations.

Harwood said the study note on Acts 2:23 refers to both “the plan and foreknowledge of God” as well as “the free (and sinful) acts of human beings.”

Noting that most Calvinistic interpreters understand genuine human choice to be compatible with divine determinism, he said “they will probably not object to the explanation of this verse” and concluded “the study note on Acts 2:23 should satisfy all evangelicals, both Calvinists and non-Calvinists.”

Harwood said the study notes for this text contains “theological definitions and presuppositions affirmed by Calvinists only.”

Among other concerns, he specifically cited study notes that portrayed God as putting His “’electing love’” on some people but not on others “’in eternity past’” – an idea “consistent with Calvinistic presuppositions of eternal decrees and election to salvation,” he said.

He said that “emphasizing God choosing in Christ is appropriate since God the Father referred to Jesus as ‘my Son, my chosen (eklegomai) one’ (Luke 9:35).”

He also pointed out that the note “mentions God’s work of ‘bringing persons to faith in Christ,’ which is another carefully worded statement which could be affirmed by most Christians, because those who affirm Calvinistic theology will read the phrase with monergistic regeneration [regeneration before faith] in their mind while other Christians think of an offer by God of salvation which can be freely accepted or rejected.”

Harwood said the study notes for this passage “favor … an explanation consistent with Calvinistic theology.”

Specifically, he noted the comments on verse 4 included the remark, “‘This verse implies the universal offer of the gospel’” — and he questioned why the study notes would contain such “an implication.”

“This study note fails to restate the proposition clearly contained in the verse, that God wants every person to be saved,” Harwood said. “Such an omission is consistent with the Calvinist presupposition that God desires to save all kinds of people rather than every person.”

He also pointed out a key omission in this portion of the study note: “These verses provide the theological basis for the preceding statement that God wants people to be saved.”

Harwood said this comment omits the key word: “all.”

“This study note, consistent with Calvinistic interpretation, fails to affirm God wants all people to be saved – despite the Bible itself stating in verse 4 of the CSB that God “wants everyone to be saved,” he said.

Still, he allows that the note on this verse is written in such a way “that one could affirm the interpretation of the study note whether or not one affirmed Calvinism.”

He cited the study note which states: “‘The phrase for those of the whole world does not mean the salvation of all people. It does mean that, in keeping with God’s promise to bless all the nations through Abraham and his descendants (Gn 12:3), Jesus’s saving death extends the offer of salvation to all nations.’”

Wax has served as managing editor of The Gospel Project, a LifeWay Bible study curriculum, and writes the Kingdom People blog hosted by The Gospel Coalition, a self-described network “in the Reformed tradition” [exclusively Calvinistic churches].