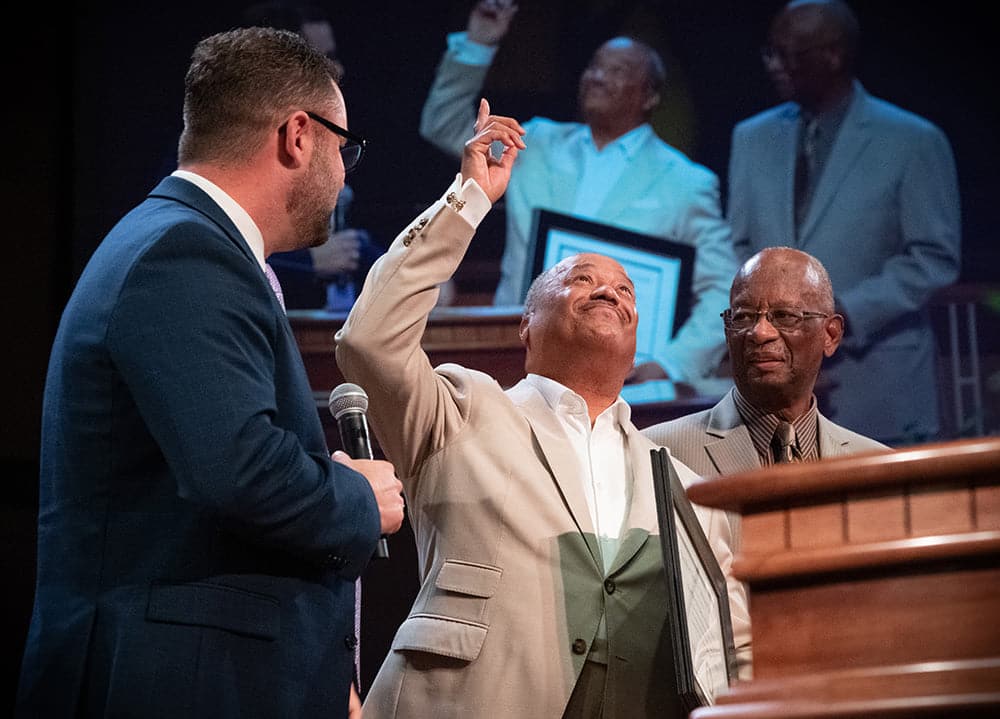 NEW ORLEANS, La. (NOBTS) – The board of trustees at New Orleans Baptist Theological Seminary and Leavell College approved a $12 million plan to make critical campus renovations including updates to student housing, the cafeteria and the student center during their spring meeting April 12 and 13.

In addition, the board voted to rename the student center in honor of Fred Luter, pastor of Franklin Avenue Baptist Church in New Orleans. The renewed cafeteria will be named in memory of Landrum P. Leavell II.

Jamie Dew, president of NOBTS and Leavell College, shared the news of the student center naming with Fred Luter and the members of FABC on Easter Sunday.

“Proverbs chapter three verse number 27 says this ‘Do not withhold good from those to whom it is due when it is in your power to do so,” Dew said during the naming announcement. “Pastor Luter you are clearly a man to whom honor is due and it is within our power to do so.”

The LSC renovations were funded by a $2 million anonymous gift. A gift of that size includes naming rights for the building, Dew said. In consultation with the NOBTS administration, the donor chose to recognize Luter’s humble and faithful service in New Orleans and throughout the SBC by naming this building in his honor.

During the presentation, Dew recounted how he began listening to Luter’s sermons shortly after becoming a believer. Luter made an impression on Dew.

“When you watch someone from afar, you have an impression about who they are and what they are. And you know how this goes, sometimes when you get to meet these people in real life they are not who you thought they would be,” Dew said. “Brother, you are not only everything I thought you were, you are more. We love you.”

A video of Dew’s announcement at FABC is available here.

Luter, called as FABC’s pastor in 1986, helped the struggling congregation with 65 members grow to one of the largest Southern Baptist Convention churches in Louisiana. During his 36-year tenure as FABC pastor, Luter has become an important voice for the cause of Christ in the city of New Orleans and an ardent supporter of the seminary’s work. In 2012, Luter was elected as the first African American president of the SBC and served two terms in that role.

In addition to the LSC improvements and naming, the multi-year campus renovation plan approved by the trustees calls for the complete renovation of student housing units and updates to essential public buildings such as the cafeteria. The project also includes the construction of one new faculty home. The updates will include numerous ADA accessibility features to better serve the campus community.

The cornerstone of the plan is a $5 million update to the cafeteria including the construction of 4,000 sq. ft. addition to house the kitchen and storage. The main floor of the cafeteria will be reformatted for better space utilization. The former kitchen area will be converted into two meeting rooms and new bathrooms. The current second-floor meeting room will be remodeled, and an elevator and mezzanine will be added to offer better access to the room. The phased construction and remodeling of the cafeteria will begin in May.

In addition to the updates and new features, the cafeteria will receive a new name. Trustees voted to name the cafeteria the Landrum Leavell Dining Hall in memory of Landrum P. Leavell II. Leavell, the seminary’s seventh president, led NOBTS for 20 years with a singular focus on training men and women for kingdom work. This essential community and conferencing space on the campus quad will honor his legacy on campus.

Close to $4.5 million will be spent remodeling and updating student housing including the addition of eight new apartments in the former Shepherd’s Corner building. Many of the apartments covered in the renovation plan were built when the NOBTS campus relocated to Gentilly. While the structures are sound, updates and repairs are needed. The most extensive repair and restoration work will be in Willingham Manor (married student apartments). Willingham foyers, hallways, stairwells, and apartments will be remodeled. Apartments will receive new appliances as well as plumbing and electrical updates.

Other campus improvements include an elevator and exterior updates for the Frost Building and a new meeting space on the second floor of the student center.

By Steve Horn, Louisiana Baptists executive director Jesus reminds us that we should always pray and never give up (Luke 18:1). Today’s ruling from the Supreme Court serves as a good reminder of that truth. For almost 50 years, American Christians from various denominational backgrounds have been praying and … END_OF_DOCUMENT_TOKEN_TO_BE_REPLACED