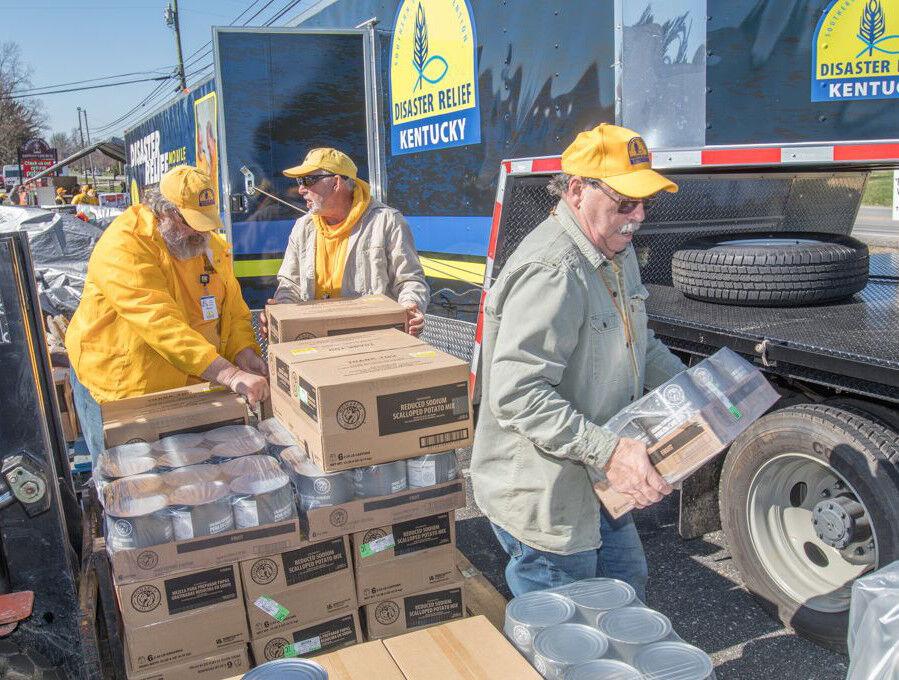 During a press conference in Mayfield on Sunday afternoon, Gov. Andy Beshear broke down some of the fatalities by county.

“I know it’s over 10 in Warren County, we’re over 10 and growing in Hopkins County, we have significant loss here in Graves County,” he said. “We’re over 10 in Muhlenberg County, in a town of 100 or so people.  We’re at three to five in Caldwell County.  Those numbers are going to continue to grow, as we’re able to go house to house.”

Beshear said they still don’t have an accurate number of casualties at a candle factory in Mayfield, where there were 110 workers when the tornado struck, leveling the building. However, later Sunday, There was some good news that came out. A spokesman for the candle company said eight were confirmed dead and eight remained missing, but more than 90 others had been located.

He said many of the employees had gathered in a tornado shelter and after the storm was over left the plant and went to their homes.

Of course, the devastation in Mayfield remains with property damage everywhere.

“We’re going to have over 1,000 homes that are just gone,” Beshear said. “That assessment is going to take some time, as I don’t think we’ve ever seen damage on this scale.”

Officials with the National Weather Service in Paducah, which covers western Kentucky, say they have had damage survey teams out since Saturday, and have so far determined the rating to be EF-3 or greater.  That’s on a scale that goes from EF-0 to EF-5, which is the strongest.  Winds are estimated to have been from 158-206 miles per hour, with a path that was ¾ of a mile wide.  Their surveys are continuing.

Among those joining Beshear in Mayfield was U.S. Homeland Security Secretary Alejandro Mayorkas, who toured the decimated area, including Graves and Marshall counties.  “I want to make it perfectly clear that we are here physically today, but we will be here tomorrow, and the days, weeks and months ahead, until the recovery is complete.”

FEMA Administrator Deanne Criswell also was on hand to view the damage.  She saluted first responders, and others who have tried to assist.  “We’ve heard incredible stories about neighbors helping neighbors.  Neighbors rescuing people from rubble.  You are also first responders and thank you so much for all of the effort you put in to make sure that your neighbors are safe.”

Criswell said one of their housing experts will arrive in Mayfield on Monday to begin working on a strategy with local officials to help with long-term housing needs for residents in the affected communities.

BG Robert Larkin, Kentucky’s Assistant Adjutant General, said 300 Kentucky National Guard soldiers and airmen have been deployed to nine counties to help residents.  “We are pulling missions in law enforcement augmentation, search and rescue, as well as providing air support and airlifts.  We continue to anticipate needs and are processing requests through the Kentucky Operations Center.”

By Will Hall, Baptist Message executive editor ALEXANDRIA, La. (LBM) —“Nobody cares what’s happening to the Uyghurs, okay? You bring it up because you really care, and I think that’s nice that you care. The rest of us don’t care.” This appalling statement was made by Silicon Valley billionaire Chamath … END_OF_DOCUMENT_TOKEN_TO_BE_REPLACED