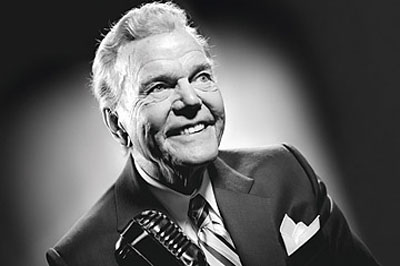 Paul Harvey captured the ears of radio listeners for decades with his down home Midwestern accent and his traditional American values. CHRIS WALKER/Chicago Tribune

Paul Harvey Aurandt was born on September 4, 1918 in Tulsa, Oklahoma. Twenty-five years later, the surname was dropped for professional reasons as his star rose in the world of radio.

Tragedy struck early as three-year-old Paul lost his father while he was in the line of duty as a Tulsa policeman. The burglar’s bullet put the family in desperate financial straits. To keep debt collectors at bay, Paul’s mother had small apartments built into their house to make money from renters.

Paul built his own radio set as a kid and the magic and medium of radio remained a lifelong passion. In high school Paul worked at KVOO, a local station in Tulsa, and eventually worked in Salina (KS), Oklahoma City, Honolulu, and St. Louis.